A clear choice on labor and workers’ rights in November 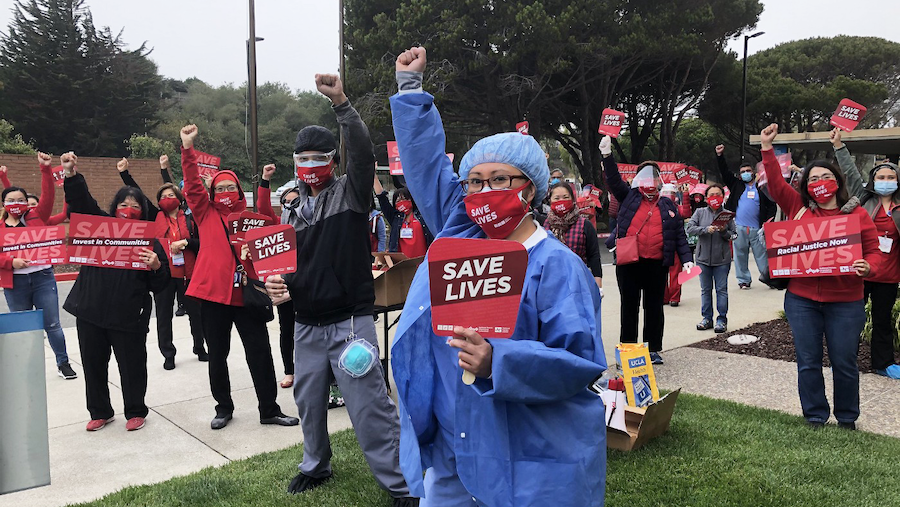 On labor and workers’ rights, the contrast between Trump and Biden couldn’t be sharper.

There are many reasons nurses believe President Trump is hazardous to our health. And from his abysmal failure to stop the spread of COVID-19 and his authoritarian behavior — to racial justice and police violence, health care, the climate crisis, gender justice, and immigration — critical issues for the November election are lining up.

But nurses know there’s one issue that doesn’t get nearly enough attention, although it impacts the health and safety of our patients across the country: labor and workers’ rights. That’s an issue where the contrast between President Trump’s record and Joe Biden’s program couldn’t be sharper.

“Joe Biden represents a clear alternative on a number of essential issues to nurses and other working people,” says National Nurses United President Zenei Cortez, RN. “He supports union organizing and collective bargaining rights. Trump has gutted those protections through anti-worker appointments and other policies.”

In 2016, Trump sold himself as a champion of workers, although his target was entirely white workers. Nurses know it was just a façade. We know that working people across the country have suffered from decades of policies that led to deindustrialization, declining real wages, the transfer of wealth to corporations and the economic elite, deregulation, and an all-out assault on unions. Trump, corporate America’s BFF, was never going to reverse that. The consequences for people in America have been severe, with a staggering wealth gap, millions stuck in low-paying jobs, and appalling levels of poverty, homelessness, food insecurity, and medical debt, all punctuated by racial disparities and persistent discrimination.

Trump’s rhetoric can’t hide his record: a Wall Street, Chamber of Commerce wish list. Rather than being a champion of workers, he has acted as a champion of libertarian, far-right ideologues, legislators, donors, and think tanks allies, such as the Koch Brothers, Michigan’s Mackinac Center, and the American Legislative Exchange Council.

This championing of corporate interests at the expense of workers and unions hurts our patients, especially our Black, Brown, and Indigenous patients. As Dr. Martin Luther King noted about anti-union “right to work” laws, their “purpose is to destroy labor unions and the freedom of collective bargaining by which unions have improved the wages and working conditions of everyone. Wherever these laws have been passed, wages are lower, job opportunities are fewer, and there are no civil rights.”

So what exactly has Trump done in office to hurt working people? Let’s break it down.

Trump’s alliance with corporate interests is stamped across his administration, from his executive orders to his appointments to Cabinet and other regulatory positions, including by appointing anti-worker, pro-corporate interests to the National Labor Relations Board, the federal agency which oversees labor-management rules. And then there are the pro-corporate judges Trump has appointed to the federal judiciary, including two Supreme Court justices.

The 2018 Janus Supreme Court decision, made during Trump’s presidency and aided by his pro-corporate appointees, attacked worker protections by encouraging public workers to evade financial support for their unions. There have been other anti-worker Supreme Court decisions under Trump’s appointees, including blunting the legal rights of workers to sue employers for unfair treatment by forcing them into private arbitration, a process heavily weighted toward employers. As Justice Ruth Bader Ginsburg said in her dissent, the result is to “accept arbitration on their employer’s terms or give up their jobs.”

Trump’s Labor Secretary Eugene Scalia, son of the late far-right Supreme Court Justice Antonin Scalia, oversees the federal Occupational Safety and Health Administration (OSHA), an agency that is supposed to be in charge of workplace safety. Yet he is another prime example of a pro-corporate appointee deciding what is right for workers.

Under Scalia, OSHA has resisted the call by National Nurses United and other unions to require employers to implement safer hospital standards during the pandemic, including providing lifesaving personal protective equipment (PPE) at a time when more than 1,500 health care workers, including more than 200 registered nurses, have died from COVID-19. OSHA has also failed to protect workers who speak out against dangerous conditions that expose them to the virus.

Scalia has been openly hostile to unemployment insurance, even during the pandemic, echoing rightwing rhetoric that it undermines work. He has favored allowing some companies to avoid paying pandemic-related sick and family leave benefits.

The list of Trump’s anti-worker executive orders and other administrative moves is endless! But here are just a few additional Trump attacks on workers’ rights:

Then there’s the National Labor Relations Board we discussed earlier. Trump’s management appointees have carried out the most sweeping rollback of federal labor law rights in years, among them:

Former Vice President Biden, who has a history of support for unions, offers a pronounced difference.

His platform acknowledges a “war on organizing, collective bargaining, unions, and workers” that has “been raging for decades, and it’s getting worse with Donald Trump in the White House.” And he cites the impact in “rising income inequality, stagnant real wages, the loss of pensions, exploitation of workers, and a weakening of workers’ voices in our society.”

Notably, Biden has endorsed a major labor priority, the Protecting the Right to Organize Act (PRO Act), the most expansive strengthening of federal labor protections in many years, setting real penalties on corporations and other businesses that violate workers’ rights, including firings and other retaliation, in union organizing campaigns. 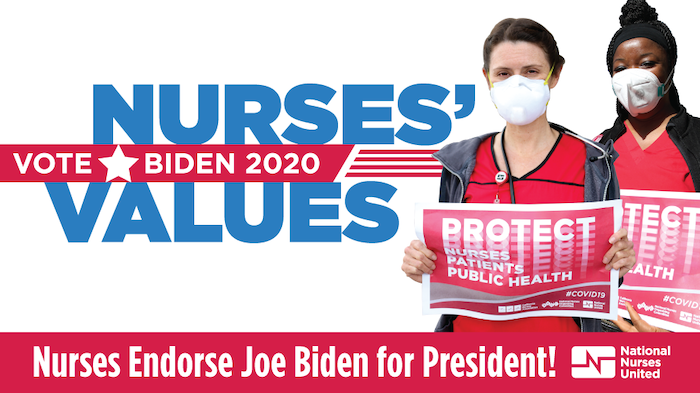 The bill passed the House in February, but the Senate has refused to even hold hearings on it, as it has with other worker and public protections. As Cortez noted, “Joe Biden has pledged to work with my union and other unions to push it through the Senate and sign it into law.”

While Trump and his allies in Congress and state houses have targeted union organizing rights, Biden recently endorsed a campaign by 1,700 RNs at Mission Hospital in Asheville, N.C. to join an NNU affiliate, saying, “I’m proud to stand by the Mission RNs in their collective bid for a better, safer, and more equitable workplace — an impressive show of solidarity not just for themselves, but for the health of their entire community.”

Further, Biden has called for banning state “right to work” laws, protecting the right to strike without fear of reprisal, and reinstating and expanding protections for federal employees. That includes nurses and other employees whose collective bargaining rights have been significantly eroded by Trump appointees and policies.

Our veterans and VA nurses have also suffered under Trump and would fare better under Biden. “Joe Biden supports ensuring a vibrant Veterans Administration to provide high-quality care for our nation’s veterans,” Cortez noted. “That would be a relief after nurses and other employee rights have been under attack by the Trump administration.”

Nurses know what is at stake in November, and we understand the urgency of ending the disastrous policies and behavior of President Trump. But our work doesn’t stop there; past the election, we will continue to mobilize and organize for the transformative social changes all workers, and patients, sorely need.

That should be a Labor Day pledge for us all.