A champion of nurses, patients and the people: NNU Endorses Bernie Sanders for President 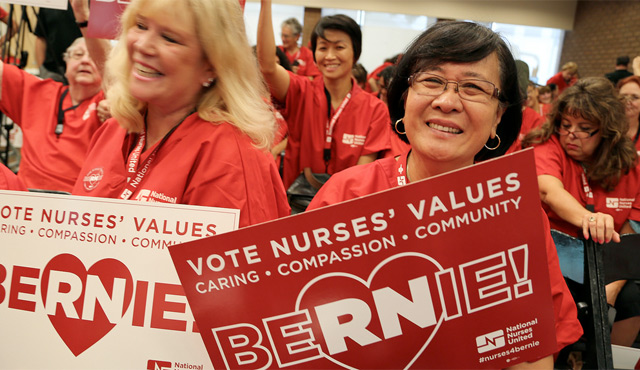 “What Bernie Sanders’ campaign represents is an opportunity to not just speak truth to power, but to join movements together to change our country,” National Nurses United (NNU) Executive Director RoseAnn DeMoro emphasized Monday, to a crowd of cheering nurses.

The 200-plus nurse members had gathered in NNU’s Oakland, Calif. office for a national conversation with Sanders—also broadcast live to thousands of additional RNs in cities from Des Moines and Chicago, to Kansas City and Orlando. Citing Sanders’ track record on supporting Medicare for all, fighting income inequality, working to end systemic racism, and “the same issues that animate nurses”—DeMoro concluded her introduction of Sanders with a special announcement.

“Today, nurses across the nation join up our movement to heal America with the phenomenon that has spontaneously erupted around Bernie Sanders,” DeMoro said. “I proudly announce that National Nurses United is endorsing Sen. Bernie Sanders—friend, human rights champion—for President of the United States.”

A sea of red-clad RNs chanted, “Bernie! Bernie!” as Sanders, ever a man of the people, accepted the nomination by first turning the focus back around on the crowd—and acknowledging the hard work of nurses.

“I am humbled and appreciative for your support.  You are the backbone of our healthcare system,” said Sanders. “On behalf of people of America, I want to thank you for the work that you do.”

Pointing out RNs often do not have adequate support and resources, due to healthcare corporations putting profits over patients, Sanders declared, “We have to change the healthcare system in America. And we have to change boldly and fundamentally the priorities of this nation so that not all our income is going to the top one percent.” 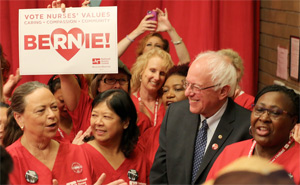 In an hour-long Q&A, Sanders fielded questions from RNs from across the country, fostering a meaningful exchange often punctuated by cheers. Callers asked about the VA system (Sanders supports efforts for VA nurses to organize and would fight back against underfunding/efforts to privatize), safe staffing (Sanders co-sponsors federal ratios bill S 864), access to healthcare (he supports Medicare for all) and other issues that are critical to nurses.

“Our vision is that when people get sick, they should be able to get healthcare, regardless of income because it is a right,” Sanders emphasized. He also fielded questions from press, including his plans for addressing systemic racism (an issue also important to NNU).

“I think the goals of Black Lives Matter are exactly right,” Sanders said, explaining that his campaign would be fighting for real criminal justice reform and to end the “vestige of institutionalized racism in the country,” as well as working toward a vision of economic equality that fully enfolds black lives into a world of increased jobs and expanded access to education.

Sanders closed by explaining, “The billionaire class is so powerful that no president can take them on alone. The way you push forward a progressive agenda is when millions of people stand up.”

Cheering Sanders’ support for RN issues, nurses concluded the event by taking to their feet—and doing just that.