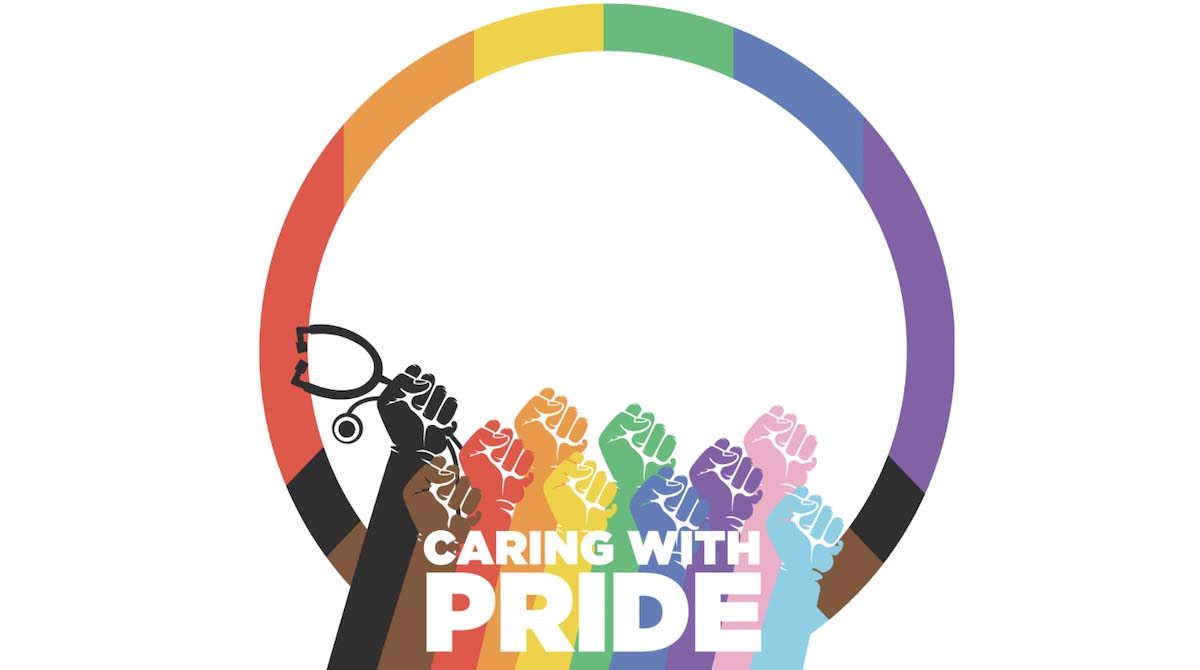 NNU nurses fight for LGBTQ+ health, in the world and in our own nursing practice

As Pride month comes to a close, we recognize a critical aspect of the work that registered nurses do throughout the year to support LGBTQ+ health: allowing patients to wholly be themselves.

“We can measure in stress hormones, in illnesses that result from having chronically elevated fight or flight responses, that people’s health suffers physically from not being able to be themselves,” said registered nurse Guy Vandenberg. “That constant stress affects people emotionally, spiritually, and physically. It literally makes people sick.”

While working as a Covid-19 contact tracer, Vandenberg found himself comforting a patient, reassuring him that even though their interview hadn’t pointed toward the source of the man’s Covid infection, that was okay. A longtime RN, activist, and director of programs providing services for injection drug users, sex workers, incarcerated persons, and homeless people living with HIV, Vandenberg was there to make his patient feel safe.

“I want to tell you something,” the patient finally said, explaining that he couldn’t reveal to his parents that he was gay, or that he had recently met up with someone from a dating app. At our best, nurses can provide a secure space for patients to open up, Vandenberg said.

“One of the reasons why nurses are the most trusted profession, that’s part of it,” he said. “People feel like a nurse will listen to them and not judge.”

As we fight for the kind of world we want to return to after a year and a half of the deadliest pandemic in our lifetimes, it’s critical to look to the work LGBTQ+ nurses and RNs who care for LGBTQ+ patients have been doing for decades to reimagine a healthier existence for all people. Getting to that healthier future requires deep systemic changes, and constant course correction within ourselves as nurses. It also requires radically imagining what’s possible.

“What I love about being queer is that for me it is a way to imagine a world that is different than the world we are given,” said Britta Houser, a registered nurse in the emergency room at Kaiser Permanente in Oakland, California. “Let’s be broader about the world we want to fight for … I think that’s the same as the way we work as a union movement. Let’s be creative about the future we envision.”

Some NNU nurses were on the forefront of reimagining a healthier society — and healthier health care — during the early decades of the AIDS epidemic.

“We weren’t allowed to touch [our patients] without gloves,” said Marissa Lee, a labor & delivery RN at Osceola Regional Medical Center in Kissimmee, Fla., who cared for AIDS patients in the 1980s and 1990s in New York City. Lee and some nurses across the country broke the rules and hugged their patients, many of whom were part of the LGBTQ+ community, because in a patient’s most vulnerable moments, says Lee, “just by giving the patient a hug, that patient knows you are there, no matter what.”

In the ’80s, Vandenberg was part of a pioneering unit at San Francisco General Hospital called 5B, the earliest dedicated AIDS ward in the country. RNs on the unit made it a practice to use appropriate and healing touch with patients — without gloves, and they did so even despite objections from some of their colleagues at the hospital. They also overturned traditional hospital policy on who was able to be there with patients in their final moments. In those days, every single patient who contracted AIDS died.

“It’s hard to imagine now, but you had visiting hours, and during visiting hours, it was biological family members that could come visit,” said Vandenberg. “But if somebody had a lover — if they were estranged from their biological family, but they did have a lover and a circle of friends that were close to them, it was their family … So those rules all had to be changed, and it was nurses who really did that.”

As a white, cisgender man, Vandenberg emphasized that he also enjoys certain privileges that are not shared with members of the LGBTQ+ community who are transgender, or Black, Indigenous, people of color (BIPOC).

“Even just leaving the house, they cannot bring their whole selves,” said Vandenberg, emphasizing that when patients also cannot bring their whole selves into the health care experience, that is a major barrier to optimal health. A December 2020 study in the Journal of Acquired Immune Deficiency Syndrome found that among 1,020 surveyed transgender women living in major cities across the United States, nearly a fifth reported mistreatment by medical professionals. And a Human Rights Campaign analysis found that 22 percent of transgender people and 32 percent of transgender people of color have no health insurance coverage at all.

Covid-19 only amplified the negative health disparities faced by the most vulnerable members of the LGBTQ+ community. For example, Human Rights Campaign found that even as states started reopening in the fall of 2020, 38 percent of LGBTQ+ people of color had their work hours reduced compared to 29 percent of white LGBTQ+ people and 24 percent of the general population.

As patient advocates, nurses have a unique role in resisting institutional discrimination, fighting for social justice, and providing care that recognizes everyone’s self-determination, bodily autonomy, and right to health.

“We think about the challenges of being queer and receiving healthcare are, ‘Can my partner be at the bedside?’ We want to be more broad and intersectional about how we think of the human experience — so thinking about how those barriers are even more significant if you are a person of color or trans,” said Houser, citing, for example, the “frequent and inappropriate” questions transgender patients are asked about their bodies.

“It’s not my business often, and when it is my business, I need to be mindful of the questions I’m asking and explain why,” said Houser. Listening is a critical form of advocacy, and opening up a space for patients to share their whole selves is important. But despite nurses’ best intentions, we may not always be aware of LGBTQ+ patients’ identities, said Houser.

“It’s important to always be mindful of the way we are talking to people or referring to a family member,” she said. “To try to curate a nursing practice that is built with the idea that my patients have these identities, whether they share it with me or not, will improve their health outcomes.”

Listening to organizations and activists at the forefront of LGBTQ+ health and rights is also critical, said Houser. She often refers to the UCSF Transgender Care resources, given the importance of learning “where those deficits are in my own knowledge to try to fill that gap as much as possible.”

“I thought I had already learned a lot,” said Vandenberg, as a gay man whose husband of 30 years is Black. “But she really took me under her wing, and I learned so much about what trans women of color go through, how they have to survive, and how they are treated — or not treated — by health care providers. It was eye opening for me.”

While union nurses and union workers have often been on the forefront of fighting for LGBTQ+ health and rights, there is always more work to be done — both in the world and within our own nursing practice. From listening to our patients to taking a lead from the organizations and activists on the forefront of LGBTQ+ health and rights, we can always work to be better and better advocates. This Pride month, and throughout the year, we recommit to doing just that.