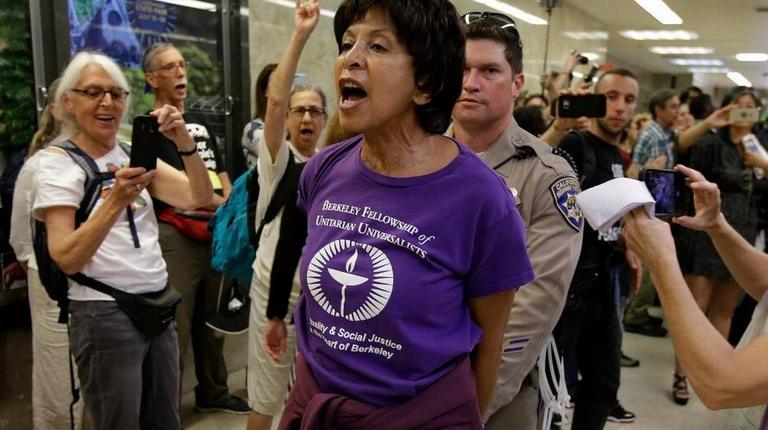 Virginia Hollins-Davidson is taken away by a California Highway Patrol officer after she and other protesters blocked the door to the governor's office during a protest by the Poor People's Campaign at the Capitol, Monday, June 18, 2018, in Sacramento. Studies show the federal tax overhaul is likely to worsen income disparities in the state. Rich Pedroncelli AP

To listen to the doom and gloom crowd, starting in the Oval Office, California resembles a failed nation with burdensome taxes on the state’s highest income residents, and badly misplaced priorities.

However, facts do matter. California is the fifth largest economy in the world, with a $9 billion state budget surplus.

W also have urgent problems that threaten the economic and health security of far too many Californians. These include a major affordable housing and homelessness crisis; a lack of jobs that pay a living wage; a health care system that leaves behind millions of Californians because they have no health coverage or because they have exorbitant out-of-pocket costs for health insurance; and escalating public college and university tuition that limits educational opportunity or leaves students weighted down with debt for decades.

These glaring needs are a testament to the worst inequality in the United States since the Great Depression. Today the top one-tenth of 1 percent of people in our nation own nearly as much wealth as the bottom 90 percent. The wealth gap is even more egregious for black and Latin Americans. The benefits of the economic recovery went overwhelmingly to the top.

California is not immune. Even with our present tax structure a recent survey ranked California as having the fourth highest gap between rich and poor in the nation. The federal tax bill enacted late last year will make it worse – next year those in the top 1 percent will get a $34,000 tax cut, compared to just $50 for the bottom 10 percent.

Legislators should continue to require the wealthiest among us to contribute to the societal common good. There are also additional major steps we could take:

Start with requiring the largest corporations that received an enormous gift in the federal tax bill to pay their fair share. For far too many years corporate lobbyists have stymied common sense reforms due to their disproportionate sway in Sacramento.

California is the only major oil producing state that does not tax the extraction of oil and natural gas – blocked for years by the powerful fossil fuel industry.

A California Nurses Association study last year on how to fund guaranteed healthcare for all Californians recommended a gross business revenue receipts tax, eliminating costs for small businesses, that could raise tens of billions of dollars for our societal needs.

Lawmakers should also carefully scrutinize and close numerous corporate tax loopholes that remain on the books.

Let’s recall that in the 1950s era of economic growth, taxes were much higher on upper-income earners and corporations.

California is a proud national model for diversity and innovative policies. But we have more work to do to make our state secure and welcoming for all.