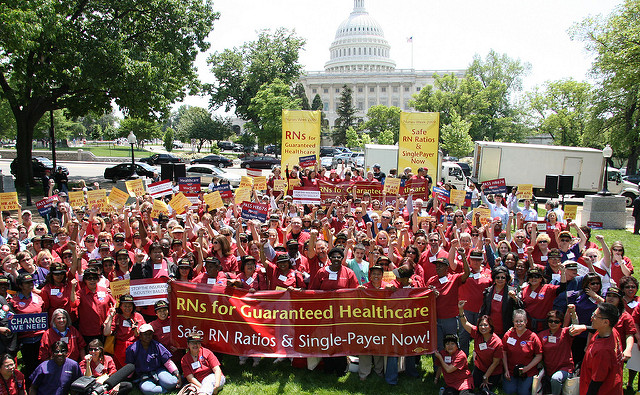 Congress may not have the political courage to move forward with a national health reform agenda...but in California the drive to pass guaranteed healthcare reform is back on track, with the Senate today passing legislation by a 22 to 14 vote to enact Medicare for all, single-payer reforms.

This vote--and the thunderous applause that followed--reminds us of a fundamental fact of our nation’s healthcare crisis: the American people are hungry, desperate for genuine reforms that will lessen the bite insurance companies and providers are taking out of their wallet.

Many political wonks and media pundits in Washington apparently take their lead from insurance and healthcare lobbyists--but patients have illnesses that cannot wait and medical bills that cannot be deferred.  If Washington can’t provide relief, then the states must lead.

Of course, the mainstream media will not give this advance the coverage it deserves.  Here’s a release from the bill’s sponsors, the California Nurses Association and National Nurses United.  Read the words of the bill’s author, healthcare hero Sen. Mark Leno.  And definitely watch this video.

California State Senator Mark Leno does not fret about the naysayers who think that during California’s budget crisis any talk about SB810, single-payer healthcare should be squelched.  He said, "You may hear some antagonists argue that we cannot afford single-payer, universal health care because of our ongoing state budget crisis. On the contrary, we cannot continue to ignore the cost savings a single-payer health care plan will provide our state and its residents. That is why cities, counties, school districts, health care providers and others have joined the hundreds of organizations that support single-payer, universal health care."

And in helping move single-payer legislation forward in California yet again, the nurses of National Nurses United and the California Nurses Association will keep putting the pressure on until it is the law of the land in California and as it advances in other states throughout the U.S.

"California has an opportunity to chart a new course for the nation. SB 810  controls healthcare costs for families and restores financial and health security through a more humane system that guarantees health coverage for everyone, and puts patients, their families, and their doctors, not insurance agents, in charge of their health," said CNA/NNU co-president Geri Jenkins, RN.

Medicare for all type reforms, such as SB 810, create badly needed, good paying jobs, and provide a huge economic stimulus. A CNA/NNU study last year documented that single-payer reform nationally would create 2.6 billion jobs and $317 billion in additional business and public revenues, much of which would accrue to California.

Perhaps more importantly for all who are watching what happens in individual states are two very different lessons learned over the past 10 days.

In Massachusetts, voters spoke loudly and clearly in voting for a Republican Senator to serve out the rest of the late Sen. Ted Kennedy’s term.  In poll after poll taken since the January 19 special election, Massachusetts voters reported that they are angry. Many of these middle-class, union families worked hard to support the Obama-Biden Democratic Presidential ticket in 2008 in large part because they had been told that Republican Presidential candidate John McCain wanted to tax their healthcare benefits while then-candidate Obama did not.  And Massachusetts voters also stated clearly that they would support in overwhelming numbers a Medicare for all like healthcare program available to everyone.  Massachusetts voters did not want health reform to fail – they want the right kind of healthcare reform.

Across the nation in California, another message is reverberating. Single-payer has now been passed three times in the state legislature, and it will keep being passed until it becomes a reality for all. It won’t be easy.  But it will be won.  Sen. Leno noted on the floor of the Senate today that consistently, some 59% of the electorate says they want a Medicare for all system.

The bill goes next to the California Assembly, then on to the Governor’s desk.  Schwarzenegger will receive this "Austrian-style" healthcare proposal first--which simply sets state policy, and allows the voters to determine a financing system.  If he is unwilling or unable to commit to healthcare reform...that will be just one more reason to replace him with a progressive more reflective of that 59% of the state's voters.

Let’s celebrate the messages coming out of both states, and let’s not give up the struggle for what we all know must come to pass from sea to shining sea and all points in-between:  a progressively financed, single standard of high quality healthcare for all.

More highlights from the indcredile and moving debate on the floor of the Senate today:

Sen. Gloria Remero noted: "Six of the 11 groups in opposition are health care companies and I think that says more about the power of money than it does the rightness or wrongness of the decision."

Sen. Chris Kehoe added: "It is our current healthcare system that is not sustainable.  Insurance premiums are rising 5 to 10 per cent per year—and that is unsustainable....If this is not done at the national level, let us take the lead at the states."

Sen. Gil Cedillo: "As most of you know, my wife was ill for the last 15 years.  I was here as a Senator with the best quality insurance money can buy—and had to fight every day for her to receive the care she deserves.  The system’s broken."

And Sen. Leno argued that this is both a health bill--and a jobs bill: "We can’t compete in a global marketplace where all our competitors have had the government take the burden of healthcare off the shoulders of their employers....as we move towards single-payer in this state, and have better universal coverage, this will attract employers to California.  We are already underwater in our healthcare system.  We can’t keep up."

Whatever happens in Washington, the fight for single-payer, guaranteed healthcare is only beginning.  Please join the movement in your state.