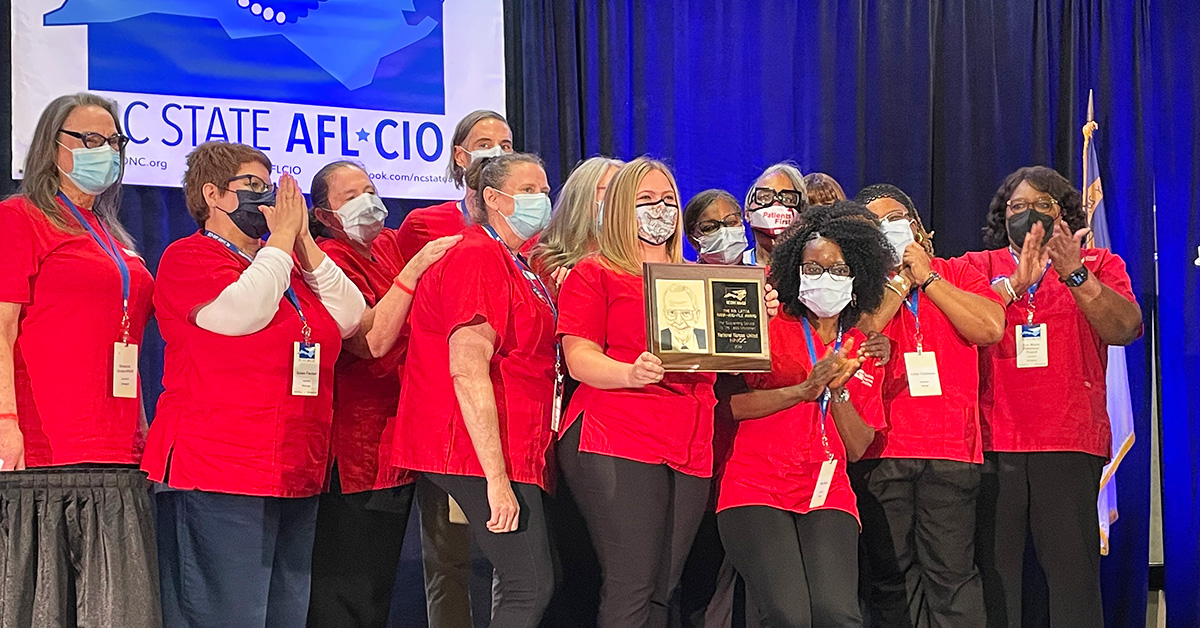 For the registered nurses at Mission Hospital in North Carolina, “Organize the South” is more than just a motto. It’s exactly what they’ve been doing. And the North Carolina labor movement is thanking them for it.

That saying has become a rallying cry for those worried that the southeastern United States is too often written off by those outside the region. Organizers within the region know that rallying working people around the issues that matter to them remains a potent antidote to the poison of modern electoral, and often partisan, politics. As MaryBe McMillan, the president of North Carolina’s state AFL-CIO, said in an interview with National Nurse, “Workers can win in the South.”

The nurses at Mission Hospital organized themselves to prove just that, as their 2020 election to join National Nurses Organizing Committee/National Nurses United (NNOC/NNU) was the biggest hospital win for organized labor in the South since the 1970s. It was a historic election for the region overall, too, believed to be the biggest union win in the South in 12 years when nurses officially approved their new union in a landslide “yes” vote.

“Anytime I tell the story, it still feels incredibly badass and unbelievable,” said Hannah Drummond, an RN in Mission’s emergency room and the facility’s chief nurse rep. “Sometimes, it can be easy to forget how much we’ve done already. Although, lately, we’ve been getting big victory after big victory with our hospital, so we have a definite resurgence of energy, passion, and fire. We’re seeing our membership growing. It’s cool to see new leaders stepping up.”

That excitement and energy is palpable not only at Mission but across the state. From the start, the nurses at Mission knew their own union campaign was about more than just their working conditions. It was about the care they could provide for their patients and, by extension, the health and well-being of entire communities in Asheville and the surrounding area. As nurses at the only acute-care facility in the state’s western region, they knew their fight was for their fellow North Carolinians, whom they’re inspiring with their union. In October, the state’s AFL-CIO honored nurses with the P.R. Latta Rank-and-File Award for outstanding organizing, cementing their role in the vanguard of North Carolina’s labor movement as unions have reached levels of national public approval not seen since the mid-60s.

When it comes to organized labor, the Carolinas have had a reputation for hostility to unions and for low union density. North Carolina has one of the lowest union densities in the country, second only to its southern sibling state South Carolina, according to 2021 Bureau of Labor Statistics data. Even before they won their union, they were organizing their coworkers in a state where unionization is rare and, relatedly, the law is incredibly hostile to unions.

But that low density is the result of policy. North Carolina has had a so-called “right-to-work” law on the books since 1947, shortly after the passage of the disastrous Taft-Hartley Act. Among other limits on unions, the law means employers can pressure employees not to join unions that exist in their workplaces. The state even saw an attempt to enshrine the policy in 2018 with a constitutional amendment, a major legislative escalation of the policy. That push failed, but that doesn’t mean anti-union legislators have given up; another bill to move “right-to-work” towards a constitutional amendment was introduced in April 2021.

But the status quo that has favored anti-union forces is under threat. As unionization sweeps the nation, new campaigns at major retail chains are just part of regularly breaking national labor news about organizing campaigns, strikes, and contracts. North Carolina’s labor movement is striking, so to speak, while the iron is hot. 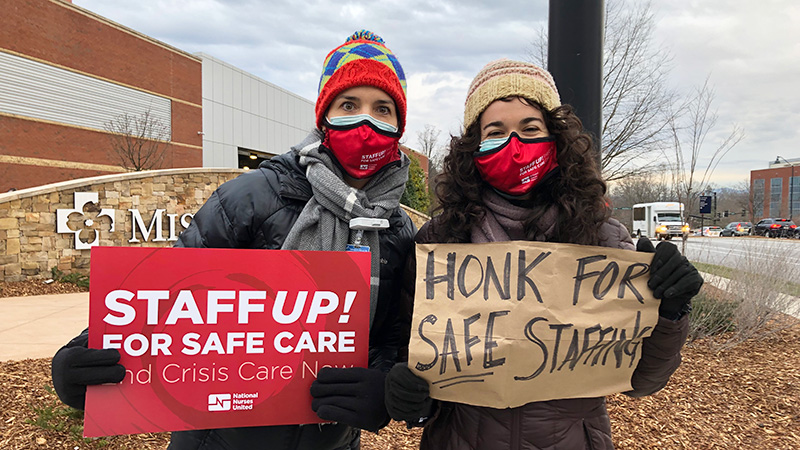 With their 2020 win, Mission nurses are on the leading edge of that organizing and already scoring big victories. Through their Professional Practice Committee, they’ve pushed management to make major investments in staffing, both for nurse retention and for support staff like phlebotomists. Drummond says they’ve seen staffing levels improve, practically in real time, in response to Assignment Despite Objection forms that nurses file. And this fall, Mission Hospital, which is owned by HCA, the largest for-profit hospital chain in the United States, announced it was investing $22 million in pay raises for its health care workers who provide or directly support patient care — undoubtedly a result of pressure from its union nurses.

And they are influencing even seemingly small quality-of-life improvements: Because the hospital cafeteria shuts down after hours, nurses successfully pressured the administration to start bringing in food trucks to provide hot meals for night shift workers. All of it has altered the playing field between the nurses and management.

“It’s like they have a respect for the fact that we’re going to bring accountability when we walk in the room,” said Drummond. “It’s kind of fun because, when we get new managers, we’re getting them trained that much more quickly as to the new power dynamic and new culture in a union hospital.”

Already unionized North Carolina nurses and the state’s broader labor movement are pleased that the state’s ranks of organized nurses are growing.

“This is the first time, and I’ve been doing this job a long time, that we’re seeing nurses other than our usual nurses standing up for their rights and speaking out,” said Mildred Manning-Joy, RN, an NNU nurse who works at a Veterans Health Administration facility in Durham, N.C. “Now, we’re seeing other people wanting to get a union.”

“I think workers are just really fed up and want to be treated with and demand respect,” said Catherine Walton-Ward, the North Carolina AFL-CIO’s Organizing and Mobilization Coordinator. “Even on our small level, we’ve seen an increase in people reaching out to us to seek assistance on how to form a union.”

McMillan and Walton-Ward said that nurses like those who’ve organized Mission Hospital are a key part of the state’s burgeoning labor movement. McMillan shared how Mission nurses have called in to talk and rally with workers facing a “brutal” union-busting campaign on their organizing drive at Piedmont Health Services in Chapel Hill, where workers won their union and just started bargaining their first contract. Beyond organizing work, NNU nurses are part of a movement hoping to introduce an RN-to-patient staffing ratios bill in the North Carolina state legislature next year. And they will continue to connect with the community organizations in the state to pass Medicare and Medicaid coverage expansions.

“Encouragement from the Mission nurses helped them persevere,” McMillan said. As a big proponent of organizing the South, McMillan believes the labor movement must “show workers here that there’s a whole community of union members and working people who support them and encourage them.”

For Drummond, the Mission nurse, seeing the energy across North Carolina and the broader South is exciting. She’s excited about union organizing happening nearby, like a Starbucks union drive in Boone, N.C., or at the synthesizer company Moog Music in Asheville. For Drummond, she’s hopeful Mission nurses have helped light the way: “I like to think we’re a beacon of hope for other folks in the labor movement in this area.”

Drummond said that, during the organizing drive, joining NNOC/NNU paved the way for tapping into the union’s vast infrastructure and deep bench of nurse leaders who rallied to the Mission nurses’ cause. Now that she’s a full-fledged member, it’s giving her a chance to be the same kind of leader as she gets to meet other nurses organizing their hospitals.

“I think about during our organizing campaign, all of the NNU nurses across the country who hopped on to our [organizing committee] calls and how much I love to do that now with new hospitals organizing,” she said. “I want everyone to have a good union job. And I don’t just hope, I know that we’re going to continue organizing the nurses of this state, and I know the impact that is going to have on patient care across the South as we get the snowball effect rolling of good, good things.”

Lucy Diavolo is a communications specialist at National Nurses United.