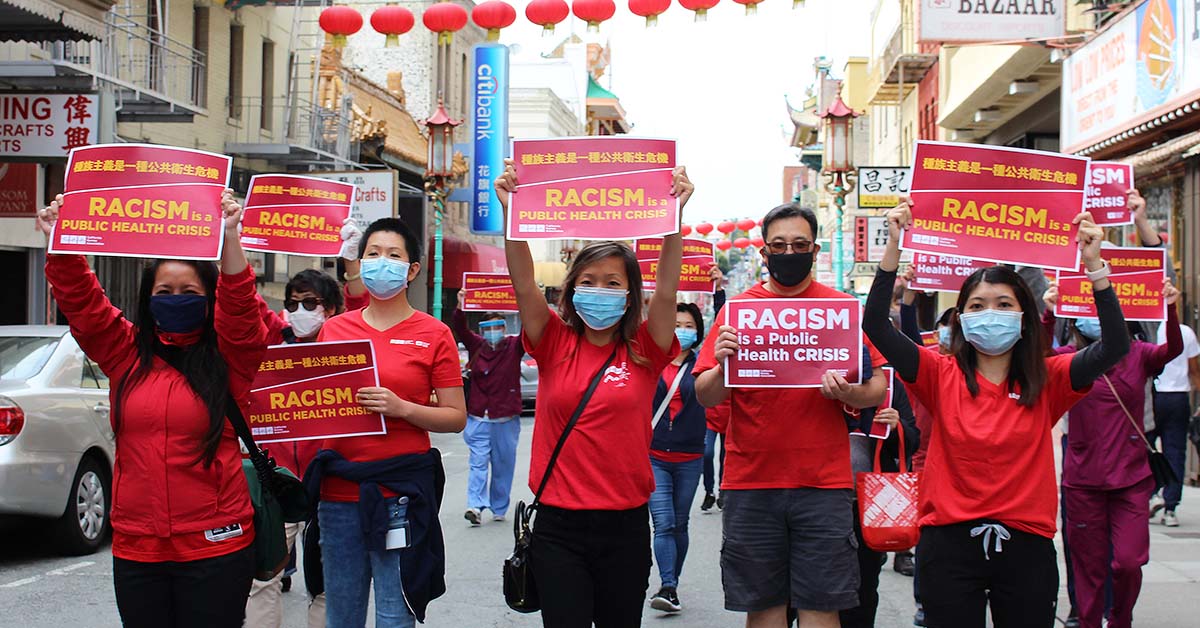 On the job and in our communities, nurses have always stood up for a more just and healthy society. We know that racial and gender injustice, outrageously priced health care, a polluted environment, economic injustice, and other societal ills are preventable — not just forces that our patients and colleagues must endure until they get sick or hurt. Because fighting for both equity in our health care system and the social determinants of health are such a critical part of being a nurse, National Nurses United is proud to announce the launch of a brand new division: the Division of Social Justice and Equity.

This new division is dedicated to growing nurses’ collective power to transform the systems, institutions, policies, and practices that perpetuate inequity and injustice. And the 2021 division launch couldn’t have come at a better time, with our Black, Brown, and Indigenous patients and nurses suffering an outsized impact from Covid-19, and hospitals using the pandemic as an excuse to shutter less-profitable units and facilities, largely in communities of color.

We’re beyond inspired to see the ways in which frontline NNU nurses are already using the infrastructure provided by the division to rocket their fight to the next level. Take what’s happening in Kaiser Permanente, for example. While trumpeting its history of “equity, inclusion, and diversity,” Kaiser’s website highlights that 67 percent of its workers are members of racial, ethnic, and cultural minorities, and 75 percent are women. But ask the Kaiser registered nurses -— who make up those diverse statistics -— about their direct experience, and you’ll hear a different story.

“As someone who is biracial, I’ve experienced some subtle racial slurs as a frontline staff nurse,” said California Nurses Association (CNA) President Cathy Kennedy, an RN at Kaiser Permanente in Roseville, Calif. Kennedy recalls an incident when a Black, male nurse was disciplined by Kaiser in a way that felt so unnecessary and harsh compared to the treatment of white colleagues that he ended up leaving Kaiser. She also shared an example of a white manager recently making a racist comment about Filipino nurses.

“It started to weigh heavily on me,” said Kennedy, who realized that despite the lip service Kaiser paid to diversity, Kaiser nurses were still experiencing racial injustice at work.

For years, Kennedy had been the coordinator for Kaiser’s Northern California RN quality liaison (QL) program. The QL registered nurses meet regularly to discuss issues impacting the quality of patient care in their facilities, and Kennedy started to think that perhaps racism could be one of those issues the group discussed. When Kennedy was elected president of CNA in 2020, Joanne Imwalle, an RN at South Sacramento Kaiser, took over as QL coordinator, and during that transition, Kennedy and Imwalle decided the QL nurses would work on their first-ever region-wide collective goal: addressing racial injustice within Kaiser.

“We knew there were actual material ways we could empower nurses to take action,” said Imwalle. The first step, she said, was looking to the infrastructure the union could provide, and the QL nurses attended a workshop hosted by NNU’s new Division of Social Justice and Equity. The division also supported the Kaiser QL nurses through what happened next: a lot of difficult conversations.

“One of the things I knew because I am a person of color is there isn’t an easy fix, there isn’t a toolbox. So I knew these conversations would be hard,” said Kennedy. But the Kaiser nurses pressed forward. Over the following months, they worked with the division to develop facility flyers, educational Powerpoint presentations, and an assessment tool to collect data about hospital-based racism from the Kaiser nurses. 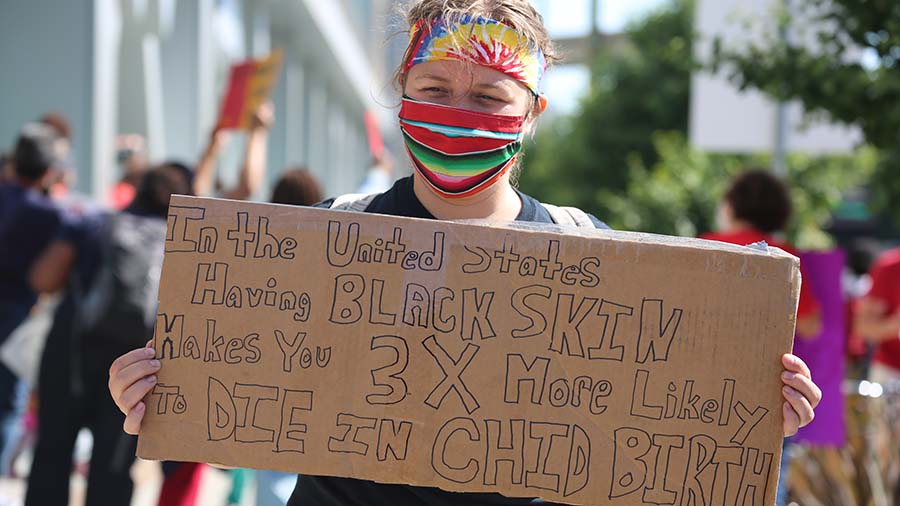 Around 400 Kaiser nurses from throughout Northern California were initially surveyed. Preliminary results showed that every nurse who took the survey had experienced racism at work: either directed at themselves, patients, or other nurses.

“When we break up the data by race, it is clear that nurses of color experience racism more often and in different ways than white nurses. But, the survey also showed that racism impacts everyone in the hospital regardless of their race,” said Imwalle. Nearly 70 percent of the time, according to the survey, nurses were not reporting incidents of racism, whether from having a sense they are on their own, feeling the complaint won’t go anywhere, or being afraid of retaliation.

“The problem with all these approaches is that they don’t hold management accountable for their responsibility to prevent racism in the workplace,” said Imwalle. Despite Kaiser’s “illusion of inclusion,” Imwalle emphasized that the survey showed when it comes down to it, nurses -— and their patients —- are still experiencing racial injustice in Kaiser facilities. In January of 2022, the QL nurses plan to present their findings to management. They  hope that the assessment tool they developed can be replicated and refined by nurses, with the support of the Division for Social Justice and Equity, at other facilities across the country who may want to take on these issues in their own workplace.

“I think it’s time that we put a lot of effort and focus on this. I’m glad it’s being addressed, and nurses are being given a platform and tools to address it in their own way,” said CNA/NNU President Zenei Triunfo-Cortez, a Filipinx Kaiser registered nurse of more than 40 years.

The Kaiser nurses are not alone in using the new division’s infrastructure to advance their work on the social determinants of health. And Division of Social Justice and Equity Assistant Director Heidi Hoechst emphasizes that the work is about empowering nurses to lead the way in the wider world, in addition to their workplaces.

“The way nurses address and fight for justice is intimately tied to the way we fight for justice in our communities,” said Hoechst. “We can’t have one without the other.”
Nurses in the University of California (UC) system have advanced their work on these issues by developing a racial-social justice committee comprising UC nurses from throughout the state. Committee Chair Rosa Villareal, RN explained, “UC has this whole diversity and inclusion initiative, and it’s not adequate. There’s a lot of fluff that’s going on, without a lot of investment, money-wise or power-wise.”

Villareal said the UC committee, which meets every other month, was a logical next step to rallies that UC nurses held during the uprisings for racial justice in 2020. She and her colleagues felt they could be doing more to create tangible change. So they took their first step by having the Division of Social Justice and Equity hold a workshop for them.

Now, the issues they are tackling include advocating for expanded language translation for patients (especially critical, said Villareal, for her facility’s large Chinese and Latino patient population), educating nursing students about their role as social justice advocates, considering representation and not just seniority in the clinical ladder, and demanding representation on hospital committees run by management.

“There’s not much diversity in management. So you have this imbalance of power that’s happening in these committees. The nurses who should be on these committees are the floor nurses, who are a more diverse population,” said Villareal. As an indigenous Latinx woman herself, Villareal said she knows representation matters. 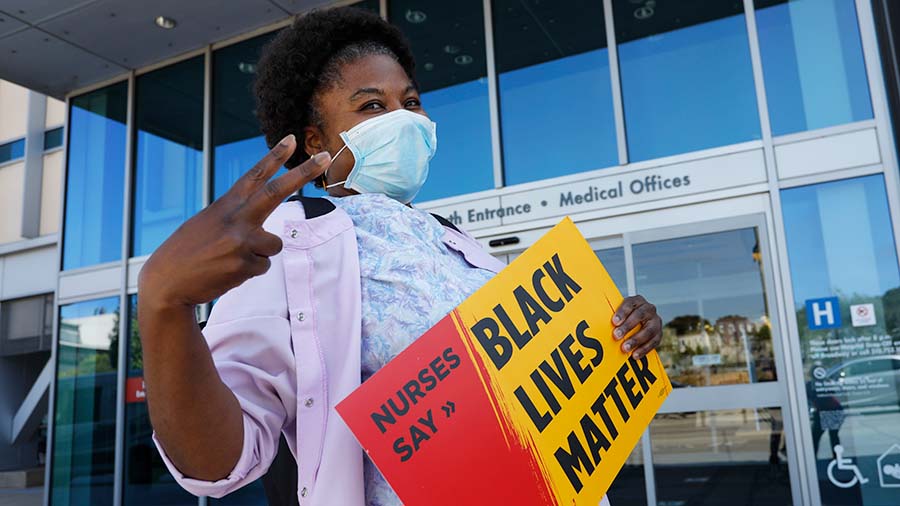 The UC nurses are also looking toward their contract, coming up in the next year, and considering how to influence change for their patients, colleagues, and communities through bargaining. NNU nurses across the country are already using their contracts to advance these issues, including by establishing equity committees, and by resolving racial disparities in pay, as RNs at UChicago Medicine Ingalls Memorial Hospital did while fighting for their very first contract.

Ingalls RN Mattie Newsom said that during bargaining, a hospital attorney told nurses that to make more money, they should go work in a “lily white” community (Ingalls cares for a largely Black and Brown patient population). Newsom said nurses were already incensed at the attorney’s racist language when they discovered, by asking around, that some of the white Ingalls nurses were already making $3 or more on average per hour than Black nurses and nurses recruited from outside the United States.

“To me, that was one of the most discouraging things. It took all I had to continue to work there,” said Newsom, who is Black. The Ingalls nurses stood together and demanded pay equity and a grid that wasn’t based on management’s whims. When management saw that the nurses refused to be divided, regardless of background, they had to come to the table.

“At that point in time, they began to eat crow and work with us to set up a grid so that nurses’ salaries would reflect an equalness according to years of service,” said Newsom. Although the Ingalls nurses settled that contract in 2020, before NNU’s new division officially launched, Newsom said they had NNU’s support all the way, and she is thrilled to know there is now even more infrastructure for nurses to do racial and social justice work moving forward.

“I am elated to know [the union has] a division like this. We need all the support and all the advocacy we can get,” she said. Villareal hopes nurses across the country will feel empowered by the creation of the division to make changes in their own facilities, even if they don’t think of themselves as activists.

“A lot of nurses don’t understand they are already doing the work. Just becoming a nurse and knowing you want to make change, that’s the driving force of all activism,” Villareal said.

“We are a very powerful organization, and it’s so important that everyone is at the table,” Kennedy emphasized, noting that building equity, and growing collective power is the only way working people will win on all the issues that matter, including Medicare for All.

“What we stand for as a union -— that we truly believe in having equity, inclusion, and recognition, because that’s who we are -— I think that’s so important. We are walking the walk and talking the talk,” said Kennedy. “It’s not easy to do this work; it’s a long journey. But we are going to get there.”

Kari Jones is a communications specialist at National Nurses United.