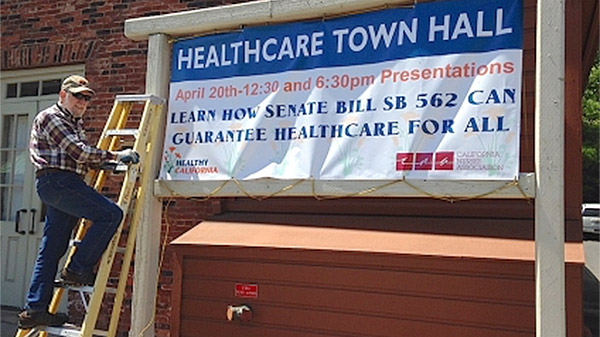 The campaign for the Healthy California Act is inviting area residents to community town hall meetings in Sonora, Calif. on Thursday, April 20 to learn about SB 562, a bill introduced in the California Senate in February that would guarantee health care to all Californians by establishing a Medicare-for-all type system.

The town hall will include a presentation by Pilar Schiavo, state-wide coordinator for the Healthy California and panel discussions with local doctors, Dr. Hope Ewing, the director of the Mathiesen Memorial Health Clinic and Dr. Bob Derlet, former chief of Emergency Medicine at U.C. Davis, and current physician at U.C. Davis and the Tuolumne Me-Wuk Indian Health Center in Tuolumne.

"I'm excited to host this town hall in my home town because I know SB 562 can bring a real improvement in people's health care in this region," said Pilar Schiavo, Campaign Coordinator for the Healthy California Act. "U.S. health care spending exceeds that of 13 high income nations with single payer systems, and yet we have the poorest health outcomes. I'm afraid this is borne out in some of the statistics on health care for Tuolumne County, where we have the highest percentage of healthcare costs due to chronic disease in the state, 63% compared to the state average of 42%."

According to the 2017-2019 Tuolumne County Community Health Needs Assessment Tuolumne County and the foothill region have a higher rate of cardiovascular disease, arthritis, asthma, depression, diabetes and cancer than the state average. The rate of cardiovascular disease is particularly high and includes high blood pressure, heart attacks, heart failure and stroke. The county's age-adjusted cancer rate ranks fourth highest in the state. The county has half the mental health providers per patient than the state and emergency response times exceed the California ES system guidelines. Wait times to be admitted to the hospital from the ED are longer than the state and national average due to the shortage of primary care physicians, with a recent reduction greatly affecting the availability of care for residents.

"SB 562 is part of the solution to many of the health care problems faced by county residents," said Schiavo. "When everyone is covered and we contain costs and cut out the waste in the current fragmented system, California can channel more resources to underserved counties like Tuolumne."

The California Senate Health Committee is expected to hold the first hearing on SB 562 on Wednesday, April 26 in Sacramento.  Hundreds of nurses and other advocates from throughout the state will gather in Sacramento that day for a rally and march.