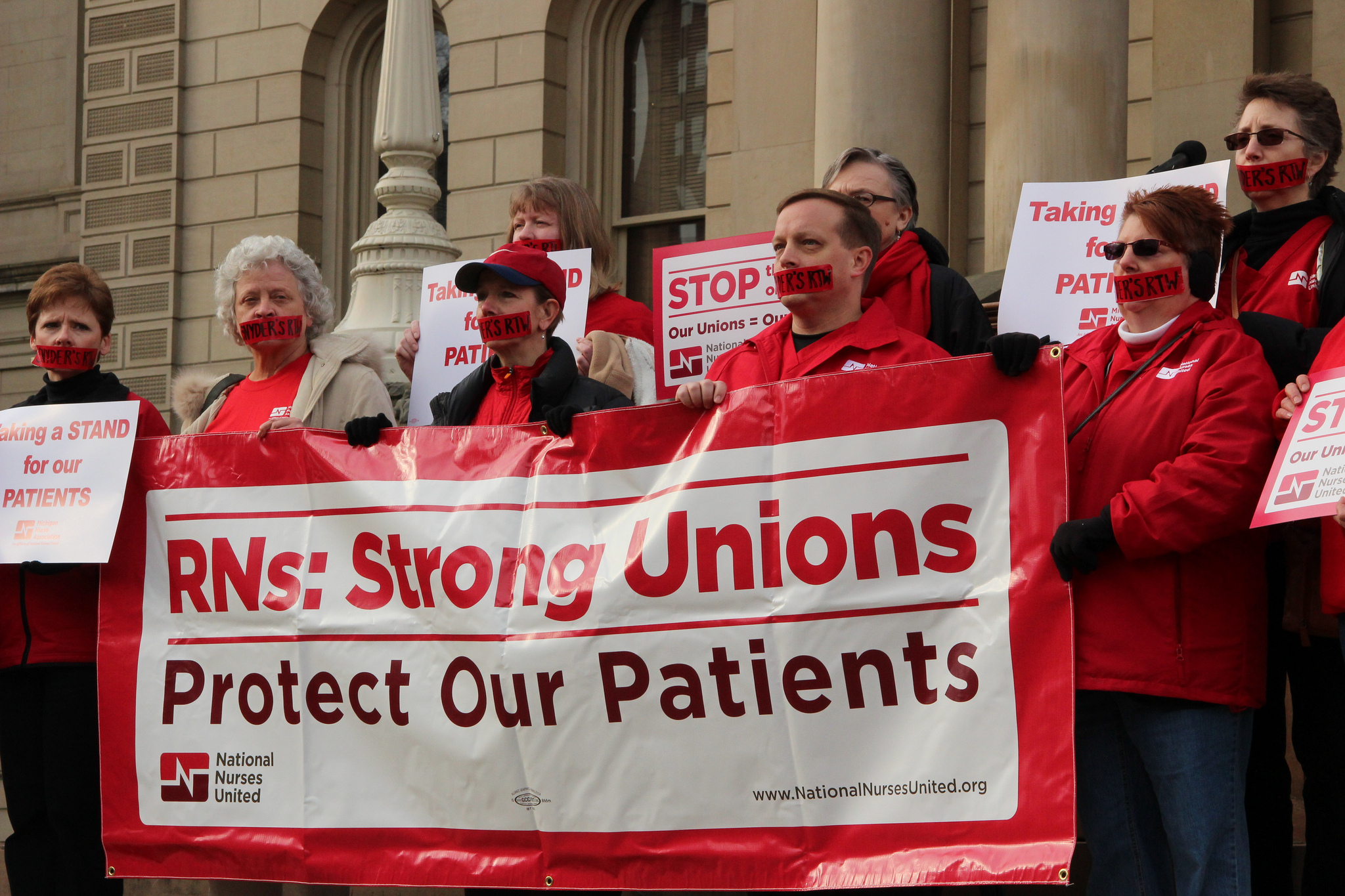 Registered nurses who are members of the Michigan Nurses Association protested Gov. Rick Snyder’s so-called “Right to Work” law on Monday with a dramatic scene: Standing silent on the steps of the Capitol with duct tape covering their mouths. It’s symbolic of how the Governor’s attack on workers will stop nurses from speaking out at work so they can keep their patients safe from corporations and CEOs that care only about profits.

“Nurses are outraged at Gov. Snyder’s war on workers, knowing that the wounds he is inflicting on our state will hurt for decades to come,” said Katie Oppenheim, a registered nurse from Ann Arbor who spoke for the nurses. “Our union is our voice in the workplace, and nurses use that voice every single day to keep patients safe against corporations that only care about their profits. Gov. Snyder and CEOs are using ‘Right to Work’ to shut workers up, pure and simple.”

Nurses were at the Capitol on Thursday with thousands of others as the Legislature rushed devastating “Right to Work” bills through in one day, despite Gov. Snyder saying for months that he did not want to see that legislation. The Governor has now said he will sign RTW into law – an abrupt change that came after the intervention of the Chamber of Commerce and millionaire CEOs like Dick DeVos.

As advocates for their patients at the bedside and beyond, nurses will join thousands of other workers at the Capitol on Tuesday for a massive day of action. They will show Gov. Snyder, right-wing legislators and corporate special interests that this is a new day in Michigan and people will no longer put up with his anti-worker, anti-family agenda.

In “right to work” states, all workers – both union and nonunion – make an average of $1,500 less per year and are less likely to have family-supporting health insurance and pensions. (Lafer, 2011) “Right to work” laws do not lead to economic growth and do not ensure any “freedoms” for workers, who already cannot be forced to join a union.

The Rev. Greg Martin of the Unitarian Universalist Church of Greater Lansing was on the Capitol steps to speak on behalf of the nurses and the faith community, which condemns the Governor’s blatant effort to appease corporate special interests and right-wing politicians at any cost to Michigan’s families. He said the labor movement has promoted social justice and economic equality in our country, and RTW aims to end that.

“Nurses have the power to heal, while corporations have only the power to profit – and under “Right to Work” in Michigan, corporations will gain even more power,” Martin said. “There can be no justice in our country if corporations continue to reap record profits while working families continue to struggle. ‘Right to Work’ devalues the work and dignity of all individuals. As a leader in the faith community, I would ask Gov. Snyder to bring people together and build our state up instead of tearing it down. It would be a shame to watch as RTW hurts all Michigan workers and destroys so much of what is good about our communities.”

The Michigan Nurses Association represents nearly 11,000 members statewide, advocating for them and their patients.

What president Obama had to say about "right to work" push in Michigan:

“What we shouldn’t be doing is trying to take away your rights to bargain for better wages. These so-called right to work laws — they don’t have anything to do with economics. They have everything to do with politics. What they’re really talking about is, giving you the right to work for less money. You only have to look to Michigan, where workers were instrumental in reviving the auto industry, to see how unions have helped build not just a stronger middle class but a stronger America."