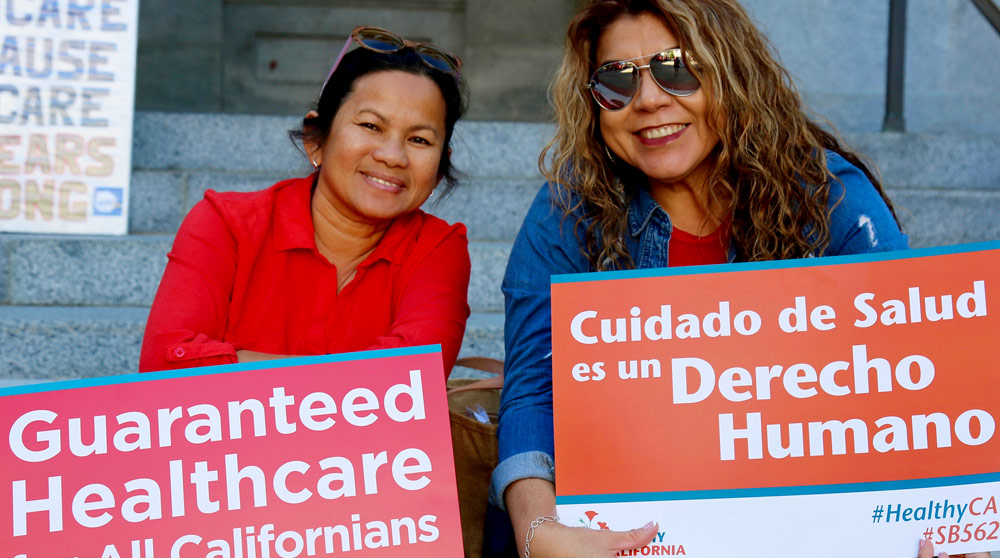 "Californians want a single payer system that puts patients health and wellbeing at the center not insurance industry profits."

Members of California Nurses Association and the Healthy California campaign will converge at a public hearing in Los Angeles, Monday December 11, to urge legislators to move forward with SB 562, legislation for a single payer health plan that would guarantee comprehensive health care for all residents in the state.

"Californians want and need our elected representatives to move this bill forward, not the dog and pony show these hearings represent," said Bonnie Castillo, Associate Executive Director California Nurses Association/ National Nurses United. "For months now, we've been organizing grassroots outreach throughout the state and people are telling us they want California to lead the way with SB 562. Californians want a single payer system that puts patients health and wellbeing at the center not insurance industry profits."

What: Rally and press conference to support SB 562 followed by a public hearing convened by the Assembly Select Committee on Health Care Delivery Systems and Universal Coverage

The public hearing titled, "Universal Coverage and Cost Containment Efforts in the United States," is the second convened by the Assembly Select Committee on Health Care Delivery Systems and Universal Coverage. Assembly Speaker Anthony Rendon created the select committee, which has no legislative power, as a stalling tactic, rather than follow democratic processes and allow SB 562 to move forward in the Assembly after it passed the Senate in June.

The Committee Co-chairs, Assemblymembers Jim Wood and Joaquin Arambula, are the 1st and 3rd highest recipients respectively of cash contributions from the health and insurance sectors combined as compared to all 80 Assembly Members of the California Legislature. This is probably why the Healthy California Act SB 562 has been completely excluded from the agenda of the select committee hearings, surmise bill supporters.

The first round of hearings, held in late October at the state capitol in Sacramento, brought hundreds of single-payer supporters from throughout the state to rally and testify for the bill. They also delivered a petition supporting SB 562 signed by 10,000 Californians in just one weekend of canvassing in all 80 Assembly Districts. Since that time, canvassing and petition drives have continued to organize grassroots support in anticipation of the 2018 legislative season.

A poll conducted in May 2016 by Tulchin Research Polling and Strategic Consulting, found that Californians overwhelmingly support the objectives of SB 562 including, lower healthcare and prescription drug costs, allowing patients to choose their own doctors and healthcare providers, elimination of premiums, co-pays, deductibles and all out-of-pocket expenses for covered services and guaranteed healthcare for all Californians.

“We do not need more study of deficient models, such as ACA expansion or hybrid systems that fall short on universality, equity, access, and affordability,” said Castillo. “The residents of California understand that the Democrats ‘own the fix’ here in this state. It’s not enough to ‘resist’ or blame the President. You have the ability if you so choose, to fix the system in a meaningful way and guarantee healthcare for all by allowing SB 562 to move forward.”

For more information on SB 562 and the Campaign for a Healthy California visit: www.healthycaliforniaact.org