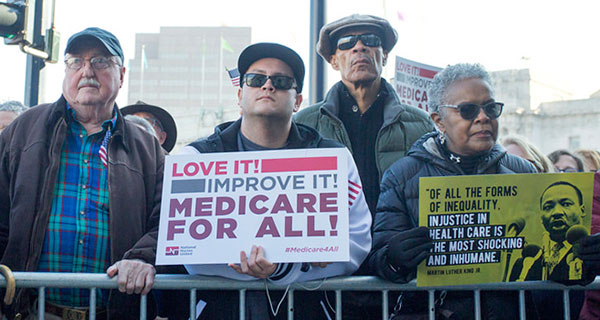 ‘Mortal threat to wellbeing of our patients, health security of country’

Calling the proposed American Health Care Act (AHCA) “a mortal threat to the health and well-being of our patients and to the health security of our country,” National Nurses United today urged all House members to defeat the proposed bill in the upcoming showdown vote Thursday.

In a letter to House members this week, NNU Co-Presidents Deborah Burger, RN and Jean Ross, RN, cited the devastating loss of coverage for 24 million Americans predicted by the Congressional Budget Office if the bill is enacted, and added “there is not a single aspect of this legislation that will benefit our patients who lack the health care services that they need.”

Last minute maneuvers Wednesday to save the fundamentally flawed bill, such as seeking to strip out minimum “essential benefits” in plans that would be eligible for federal tax credits for those buying those plans “would be a further disaster,” added Burger today.

“Increasingly, we would see people locked into junk insurance plans having to pay enormous sums to get the additional coverage they need. It also violates the promise made by the President and leading Republicans that they would enact a plan that lowers costs,” Burger said.

Burger also sharply criticized language that would allow states to deprive Medicaid coverage to low income adults if they are unemployed – even if they are trying to work and unable to be hired. “There is simply no excuse to adopt such a mean spirited provision that would deny health care to someone based on their employment status. It is unconscionable and cruel,” added Burger.

Among the many other problems with the proposed law cited in their letter earlier this week, Burger and Ross said nurses oppose AHCA provisions that:

The punitive nature of the AHCA is perhaps most evident, said Ross, in the late addition to the bill that would allow states to deprive Medicaid coverage to low income adults if they are unemployed – even if they are trying to work and unable to be hired. “There is simply no excuse to adopt such a mean spirited provision that would deny healthcare to someone based on their employment status. It is unconscionable and cruel,” added Burger.

“Our experience at the bedside, coupled with analysis from health policy researchers, confirm our conclusion that this bill does not address the primary concerns of our patients: getting the care they need when they need it, without overwhelming financial burdens,” wrote Burger and Ross to House members.

“On behalf of registered nurses across the country, we urge the rejection of this flawed, and deadly, proposal. We urge you to instead support guaranteed healthcare for all, through an improved, expanded Medicare for All program,” Burger and Ross concluded.