RN Report: Pharma Giants Spend Far More on Marketing, Sales Than They Do on Research and Development 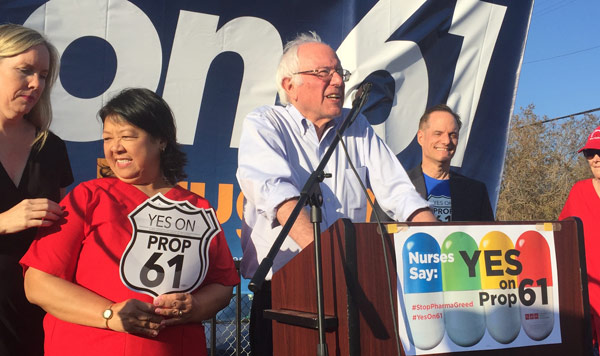 In justifying skyrocketing drug prices, the pharmaceutical industry typically claims that it needs massive profits to conduct research and development (R&D) for critical new medications. But the drug giants actually spend far more of their enormous wealth on marketing and sales than they do on R&D, a portion of which is actually funded by taxpayers, according to the latest research from the California Nurses Association/National Nurses United.

Meanwhile, a number of the drug giants are actually cutting R&D spending while rapidly escalating spending on marketing, especially in direct to consumer advertising and direct payments to physicians to encourage them to prescribe the drug firms’ high priced drugs.

“The R&D Smokescreen” is the latest in a series of research papers, prepared by NNU’s research arm, the Institute for Health and Socio-Economic Policy which may be viewed at http://www.nationalnursesunited.org/pages/research.

CNA members are actively campaigning for Prop. 61, an initiative that would lower prescription drug prices in California and is also considered a model for the nation.

Among the findings in “The R&D Smokescreen”:

On average, the top 100 drug companies spent just nearly three times as much on marketing and sales as they devoted to research and development.

Financial markets have actually rewarded companies in increased stock prices for cutting R&D departments. Cutting research spending is a frequent occurrence of a merger and acquisition wave throughout the pharmaceutical industry.

After Pfizer acquired one drug company Wyeth in 2008, it slashed the R&D budget of the combined firm in half “which ultimately resulted in the closing of research programs, research sites and the firing of scientists,” the IHSP noted.

Drug corporations increasingly rely on taxpayer funding, through the National Institutes of Health, for most of the most innovative R&D.

As economist Mariana Mazzucato wrote in the Los Angeles Times last year 75 percent of the research for the most innovative drugs are “trace their existence to NIH funding” while pharma’s focus is on “me too” drugs, slight variations of existing brand name medications for which the drug giants can receive new patents to freeze out generic competition and keep prices high.

In 2013, 68 percent of all pharma marketing expenses target payments to physicians, clearly intended to encourage those doctors to push the company’s products.

One study by ProPublica this past March found that “doctors who received industry payments were two to three times as likely to prescribe brand-name drugs at exceptionally high rates as others in their specialties.” Drug companies also make payments to physicians by paying for travel, research, gifts, speaking fees and meals. From 2013 to 2015, total amounts spent by pharma on doctors nearly doubled from $3.9 billion to $7.4 billion.

The U.S. is one of only two countries (along with New Zealand) that permits drug companies to advertise directly to patients and other consumers, a practice sharply criticized by the World Health Organization.

Physician groups have condemned the direct advertising (which anyone who owns a TV can readily see) as dangerous to health, including the inadequate transparency on risks of particular medications, and promoting the most expensive treatments. In 2015 alone, Pfizer spent $1.4 billion on ads. Humira, a drug to reduce joint pain, topped all individual drugs in direct marketing in 2015; manufacturer AccVie spent $357 million to hock Humira.