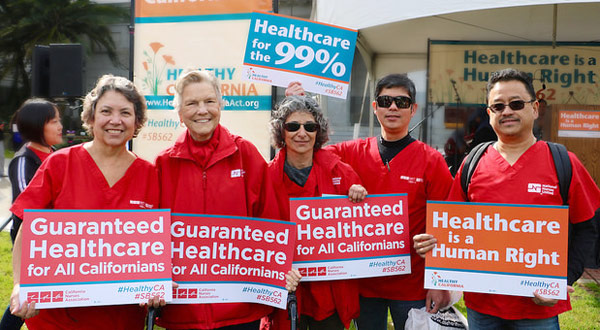 The Oakland and Richmond City Council's voted unanimously Tuesday to support SB 562 - the Healthy California Act, a bill that would guarantee healthcare to all California residents, slash patient and family costs for care, and ensure real patient choice.

The Oakland and Richmond City Council SB 562 endorsements follow the unanimous passage of similar resolutions by the San Francisco Board of Supervisors earlier this month and the Los Angeles and Berkeley City Councils in March. This week Los Angeles Mayor Eric Garcetti wrote a letter to the Senate Health Committee stating, "The City of Los Angeles recognizes the importance of developing a health care system that protects and promotes health to strengthen our communities and close the gap on health disparities. For these reasons, the City of Los Angeles supports SB 562."

"As someone who grew up in Canada I have the experience of living under a universal single-payer healthcare system and so my advocacy for this system is both because I believe in it and because I have experienced it first hand," said the resolution's sponsor in Oakland, Rebecca Kaplan, Councilmember At-Large. "Universal health care is vital to ensuring everyone has health care and a single payer system will keep costs down. I am pleased that tonight we passed a resolution unanimously supporting SB5 62 the Healthy California Act."

"As a nurse, it is crystal clear to me that the best way forward is the Healthy California Act SB 562, a bill guaranteeing health care to everyone, including preventative care. We all benefit when we all have access to health care when we need it," said Bipin Walia, an RN in the ER at Alta Bates Hospital. "We thank the Oakland City Council and Council-member At-Large Rebecca Kaplan, for their leadership and understanding that SB 562 will greatly improve health outcomes for all California."

"I was very pleased to co-sponsor the resolution to support SB 562, the Healthy California Act, because when enacted the bill will guarantee comprehensive health care to the people I serve,” said City Councilmember Gayle McLaughlin, the resolution's co-sponsor in Richmond. "Currently, 19.4% of Richmond residents have no health care, and for many more the cost of care, even with insurance, is a serious strain. It's just plain wrong that some of our residents can't get their medical needs addressed because they cannot afford health care. Single payer is long overdue and hopefully on it's way in California."

"As a Richmond resident I'm very proud of the City Council for showing leadership on this issue and passing the resolution in support of SB 562," said Pam Ramirez, a retired registered nurse and member of the California Nurses Association. "I've seen the suffering caused by our nation's poor excuse for a healthcare system from many different vantage points, as an RN, a single-mother, a diabetes patient. I've lost coverage due to unemployment and worried about my adult children's ability to get coverage and I've witnessed the serious health impacts of poverty on many Contra Costa County residents. Now is the time to move forward with single payer, to provide healthcare for all the residents of California."