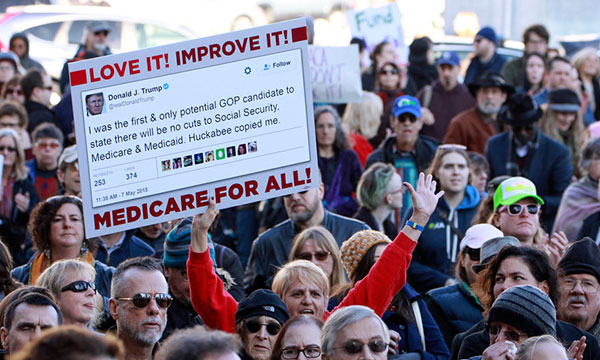 National Nurses United sharply criticized the health care proposals outlined by President Trump in his address to Congress Tuesday night, warning they would deprive care for tens of millions of Americans and increase the health and economic insecurity of millions more.

“In his speech Tuesday night, President Trump broke his promise during the campaign and before his inauguration when he pledged that no Americans now covered as a result of the Affordable Care Act would lose that coverage,” said NNU Co-President Jean Ross, RN.

“Instead, the President adopted the cynical language embraced by (Health and Human Services Secretary) Tom Price in his confirmation hearing that people with pre-existing health conditions should ‘have access to coverage.’

“But access to buying expensive private insurance is worlds apart from getting the coverage and care you need when you need it,” said Ross. “As Sen. Bernie Sanders said to Price in that hearing, ‘Has access to’ does not mean that they are guaranteed health care. I have access to buying a $10 million home; I don’t have the money to do that’.”

“If the Republicans in control of Congress force through their obsession with repealing the Affordable Care Act, millions will lose the coverage they have gained, especially without any meaningful proposals from Congress or the administration to actually lower the escalating out-of-pocket costs.” Ross cited a recent Commonwealth Fund report that 30 percent of Americans already skip needed health treatment due to the extra costs of deductibles and co-pays even when already paying for their healthcare premiums.

“Only one replacement for the ACA would guarantee everyone can get health care, lower the skyrocketing costs to families and individuals, and assure patients they can go to the doctor and hospital of their choice – strengthening and expanding Medicare to cover all Americans,” Ross said.

“As nurses know from the patients we care for every day, without health, there is no security. We cannot risk the reckless disregard for the health of our patients and our nation proposed by these heartless ideas. Nurses will continue to oppose these ideas, as we have already been doing in protests across the country, and continue to campaign for real reform, improved Medicare for all,” Ross concluded.