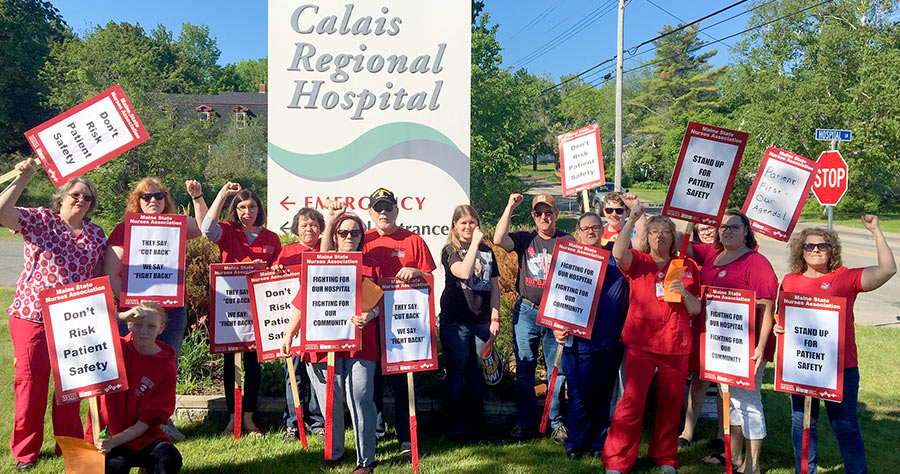 Nurses and Medical Laboratory Scientists (MLSs) held an informational picket this morning at Calais Regional Hospital (CRH) in Calais, Maine. They were joined by members of the CRH technical unit (who just voted to join Maine State Nurses Association (MSNA)/National Nurses Organizing Committee (NNOC) this past Friday) and also members of the United Steelworkers Union, Firemen and Oilers, and the Maine State Educational Association, announced MSNA.

The RNs and MLSs are protesting the concessionary demands that CRH is making at the bargaining table, after learning that CRH is having its best financial year in a decade. If these cutbacks are implemented, they could jeopardize the quality of patient care at CRH by making it difficult to recruit new employees or retain experienced ones. Current employees say more than two dozen positions remain unfilled across CRH.

CRH has already imposed benefit reductions on the nonunion staff, and is now trying to force the same concessions on hospital employees represented by MSNA/NNOC, which include RNs and MLSs. CRH workers have been in negotiations with the hospital since last September for a new contract.

"The nurses and medical lab scientists at Calais care about the people they serve, and they don't want to negotiate a contract to the detriment of the hospital,” said Congressman Jared Golden (ME-02). “Certainly, they want to keep their jobs, but it is much deeper than that. They are members of the community and are committed to serving their community and helping their patients. They're not asking for anything new in the contract, just what was in the one they had before. I’ve called the hospital CEO to express my concern for the community, the hospital, and its nurses. The solution to the hospital’s challenges should not come on the backs of its workers."

“The hospital is trying to insist on a roughly $1,700 cut in the cash value of our compensation, per employee, per year,” said Sarah Curtis, a nurse at CRH. “And that doesn’t even count the fact they want to rip our current health insurance protections right out of our contract.”

“People are leaving this place left and right,” said Trudy Gillespie another nurse at CRH. “They can’t fill the positions that are being left open. Our community depends on this hospital and we’re doing our best to stick it out and continue to provide the best care for all of our patients. But ultimately, if there’s no one left to work here, there is no hospital.”

“We could have settled this contract back in October,” said Hollye Lord who is also a nurse at CRH. “We offered them a status-quo contract with no new raises and no new benefits. They refused that offer at the beginning of bargaining and they’re refusing that offer now. But management will not budge on these cuts. We have no choice but to stand up for all CRH employees, union and nonunion, and to fight for the welfare of our families and our community.”

In light of management’s continuing attacks on employees’ working conditions, technical employees at CRH voted unanimously to unionize with the Maine State Nurses Association on Friday, June 14 so that they could take collective action with their coworkers to improve standards at Calais Regional.

“We’ve watched how the union nurses and medical scientists have stood up for themselves and really for all of us,” said Mindy Smith, a radiology technologist at CRH and one of the employees who just voted to unionize. “We wanted to have that same kind of voice at work. We are so proud to now be a part of this union with our RN and MLS sisters and brothers, and to have the power to stand up for ourselves, our patients and our community, just like they do.”