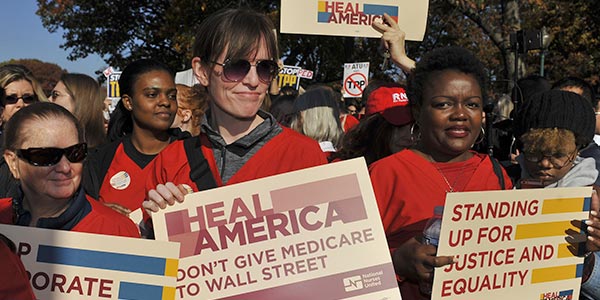 Will Deliver Over One Million Petition Signatures to Reps. Ryan and McConnell Demanding they Protect Guaranteed Healthcare for Seniors

"The November election results did not give anyone a mandate to dismantle one of the most popular public programs in U.S. history, Medicare. As nurses we are absolutely opposed to Rep. Paul Ryan's schemes to destroy it by converting it into a program that further enriches the insurance industry and denies care to seniors because they can't afford it," said Jean Ross, Co-president, National Nurses United.

"Medicare works and that's why we think it should be expanded so that everyone in our nation has access to quality care regardless of their ability to pay. Nurses will make our voices heard across the country in the face of the threat of privatization and profiteering off sickness which is at the heart of the Ryan proposal,” Ross said.