“Bernie Sanders has a proven track record of uncompromised activism and advocacy for working people, and a message that resonates with nurses, and, as we have all seen, tens of thousands of people across the country. He can talk about our issues as well as we can talk about our issues. We are proud to stand with him in his candidacy for President today,” said NNU Executive Director RoseAnn DeMoro.

NNU, which represents some 185,000 nurses from California to Florida, including nurses who live in the early caucus and primary states of Iowa, New Hampshire, and Nevada, becomes the first national union to endorse Sanders. 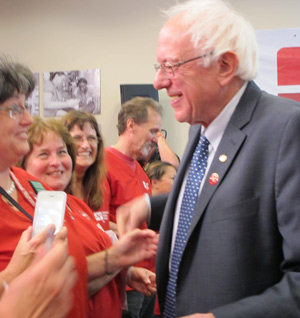 The announcement was made at a National Nurses Conversation with Bernie Sanders attended by hundreds of RNs in the Oakland, Ca office of NNU, and watched on live stream, with questions asked, by nurses at 34 watch parties in 14 states. The festive  “Brunch with Bernie” even included ice cream donated by Ben Cohen and Jerry Greenfield, founders of Ben and Jerry’s Ice Cream.

“Bernie’s issues align with nurses from top to bottom,” DeMoro continued. Among them – “insisting that healthcare for everyone is a right not a privilege, protecting Social Security and Medicare from those who want to destroy or privatize it and working to expand both, holding Wall Street accountable for the damage it has done to our communities, understanding the threat to public health from the climate crisis, environmental degradation, and the Trans-Pacific Partnership, support for minimum nurse-to-patient ratios for hospital patients, and on and on,” DeMoro said

NNU, said DeMoro, has adopted a call to “Vote Nurses Values – caring, compassion, community. Nurses take the pulse of America, and have to care for the fallout of every social and economic problem -- malnutrition, homelessness, un-payable medical bills, the stress and mental disorders from joblessness, higher asthma rates, cancer, heart ailments and birth defects from environmental pollution and the climate crisis. Bernie Sanders’s prescriptions best represents the humanity and the values nurses embrace.”

DeMoro noted that in a presentation July 29 to the AFL-CIO Executive Council, on which DeMoro sits as a national vice president, “he made it clear that you will never have to wonder which side he is on. As he told the union leaders, ‘I see myself as part of you. This is not a conventional moment, we are fighting for the future of this country’.”

A central focus for nurses, DeMoro noted, is “our dysfunctional healthcare system. Too many Americans, even with the Affordable Care Act, remain priced out of access to the health care they need even if they have insurance due to lack of effective price controls, and a still broken system based on private profit not patient need. Sanders has long championed the full, humane reform we need, an updated, expanded Medicare for all.”

She noted Sanders’ statement July 30th in Washington at a rally, hosted by NNU to celebrate the 50th anniversary of the enactment of Medicare and Medicaid, at which Sanders said, “Let's end the international embarrassment of the U.S. being the only major country on earth that does not guarantee healthcare to all people as a right. The time has come to say that we need to expand Medicare to every man, woman, and child as a single-payer national healthcare program.”

Nurses also welcome Sanders call, evidenced in a bill he authored, S 1731, calling for a Robin Hood tax on Wall Street speculation, on trades of stocks and other financial instruments, that could raise hundreds of billions of dollars annually to pay for healthcare for all, free college tuition to expand access to education, more jobs at living wages, ending AIDS, real action against the climate crisis, and other basic needs.

“Economic inequality remains the fundamental issue of our time. It is a major reason why the U.S. lags so far behind many other industrial nations not only in poverty and social injustice, but in a broad array of health outcomes, from maternal and infant mortality to life expectancy. Sanders’ leadership in calling for Wall Street to pay its share for rebuilding our national and global communities is a reminder of why we need his vision leading America,” DeMoro said.

Sanders also stands out, said DeMoro, in his outspoken opposition to the Trans-Pacific Partnership, “which includes a terrible handout to pharmaceutical giants that will further drive up drug prices, a life and death issue for millions of people.”