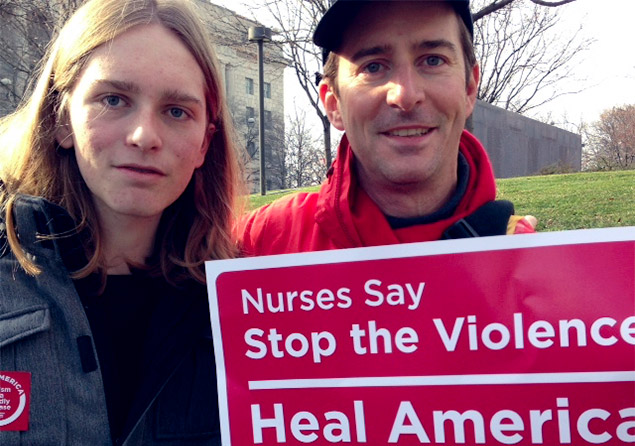 RNs call to honor Alabama student who hoped to become a nurse as well as students in Parkland, Fl. and all shooting victims

National Nurses United today commended students across the U.S. who are participating in public protests as part of a National Walkout Day to demand real action on addressing the growing plague of gun violence across the U.S.

“The activist students deserve the nation’s thanks for demanding policy makers finally pass needed reforms as well as stimulating a national dialogue on what steps we should, as a nation, take to protect our children, our families, and all of our people from what is clearly a preventable form of violence,” said NNU Co-President Jean Ross, RN.

A number of students are calling for 18 minutes of protest, including Arrington, as well as those killed in Parkland.

“We must take gun violence as seriously as any public health crisis that affects patients, their families, and all of our communities. It is as critical as any other social issue that causes death, pain and suffering, whether from environmental causes, homelessness, mental health, or any other societal crisis,” said Castillo.

“When gun violence threatens the life and safety of children, there is a particular urgency to insist on public policy reforms to stem this plague,” said Ross, noting that NNU and its affiliates have supported a broad range of gun reforms.

Gun violence is a leading cause of premature death in the U.S., the American Public Health Association notes. Guns kill more than 38,000 people and cause nearly 85,000 injuries each year. Gun associated homicides are the second leading cause of death for young people aged 15 to 24.

“As nurses dedicated to healing and alleviating human suffering,” said Ross, “the focus must begin with prevention, and the urgency of stopping gun violence before it occurs. In addition to the loss of life and physical injuries that can last a lifetime, there are also long term consequences that can erode the mental and physical health of affected family members for years.”

Gun violence is now pervasive throughout our society, fueled additionally by inadequate support for mental health services, domestic violence especially against women, and racism and other hate ideology. However, there is one thread common to nearly all the incidents of gun violence – the all too easy access to firearms. “That’s where reforms must begin,” Ross concluded.