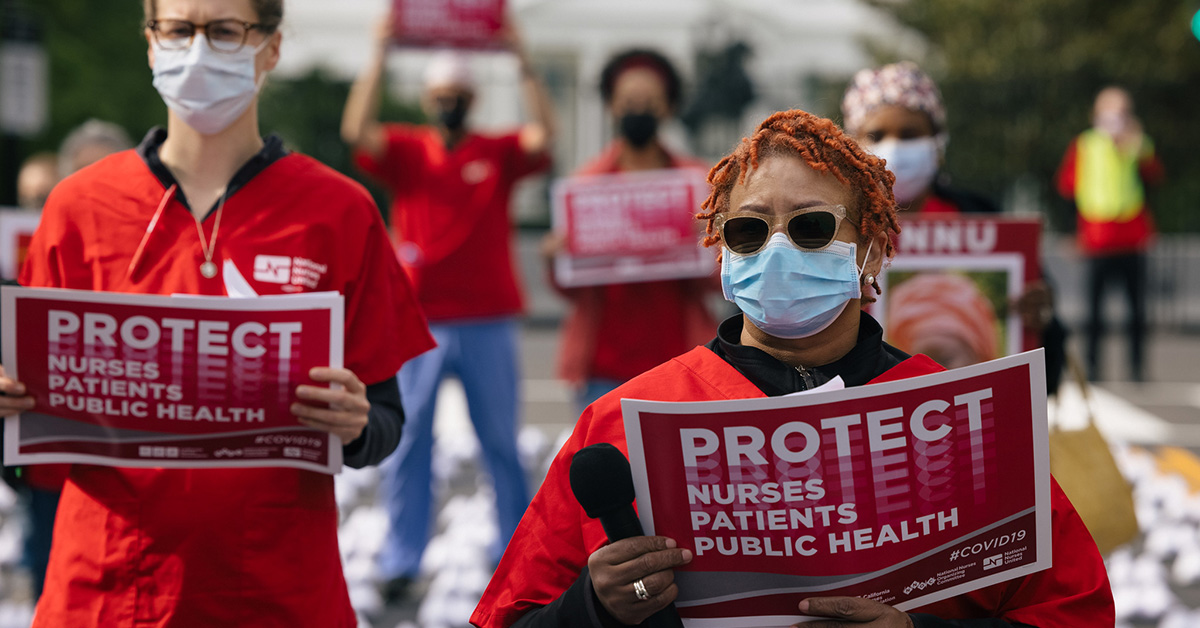 National Nurses United today criticized the latest Centers for Disease Control and Prevention (CDC) rollback of Covid-19 safety guidelines as a serious risk for prolonging the spread of the pandemic. NNU is calling on the CDC to reverse the new guidelines.

“Regrettably, the CDC is once again responding to political pressures from those desperate to remove any safety protocols during this deadly pandemic that is still causing unacceptable numbers of infections, hospitalizations, and deaths every day,” said NNU President Zenei Triunfo-Cortez, RN.

“The new color-coded scheme will create confusion and public distrust in what is safe and what is not,” she said. “The danger to our most vulnerable populations, including immunocompromised individuals and young children, is especially worrisome.”

In its guidelines, the CDC is adopting new metrics on when it is “safe” to lift universal indoor masking protections. But the population figure required to meet the “high” risk level the CDC is basing the proposal on are “relatively useless,” Triunfo-Cortez said.

“Under the new metric, anything up to 200 new cases per 100,000 could still be considered ‘low’ so long as Covid admissions and hospital capacity stay under a new threshold. The new ‘low’ could now be up to 20 times higher than the previous standard, which is certainly not warranted with the ongoing numbers of hospitalizations still occurring, and ever-escalating reports of new variants such as the BA-2 variant now spreading in many countries, including the United States,” said Triunfo-Cortez.

The "medium" level of transmission under the revised guidelines is also relatively useless, she continued. “Advising people to talk to their health care provider about whether they should wear a mask puts the burden on individuals, but also ignores inequities in health care and the fact that millions of Americans don’t have a regular physician. Instead of recommending masking, the CDC is creating an additional, unnecessary risk and burden for vulnerable individuals.”

Widespread rollback of current protocols, she warned, have already resulted in far too many people relaxing their vigilance, as seen in the dropping numbers of people getting vaccinated and getting booster shots, as well as renewed concerns about adequate immunization for young children, and the still-evolving scientific understanding of the persistent adverse health effects of Long Covid,” said Triunfo-Cortez.

“Everyone is anxious to bring this long trial of the pandemic to an end, but relaxing safety protocols will only continue unnecessary and unwarranted loss of life, and further strains for our already overwhelmed frontline caregivers. As we have said from the very beginning of this pandemic, government policies should be based on science and the precautionary principle. We don’t need new metrics, we need dedicated public health leadership,” Triunfo-Cortez concluded.