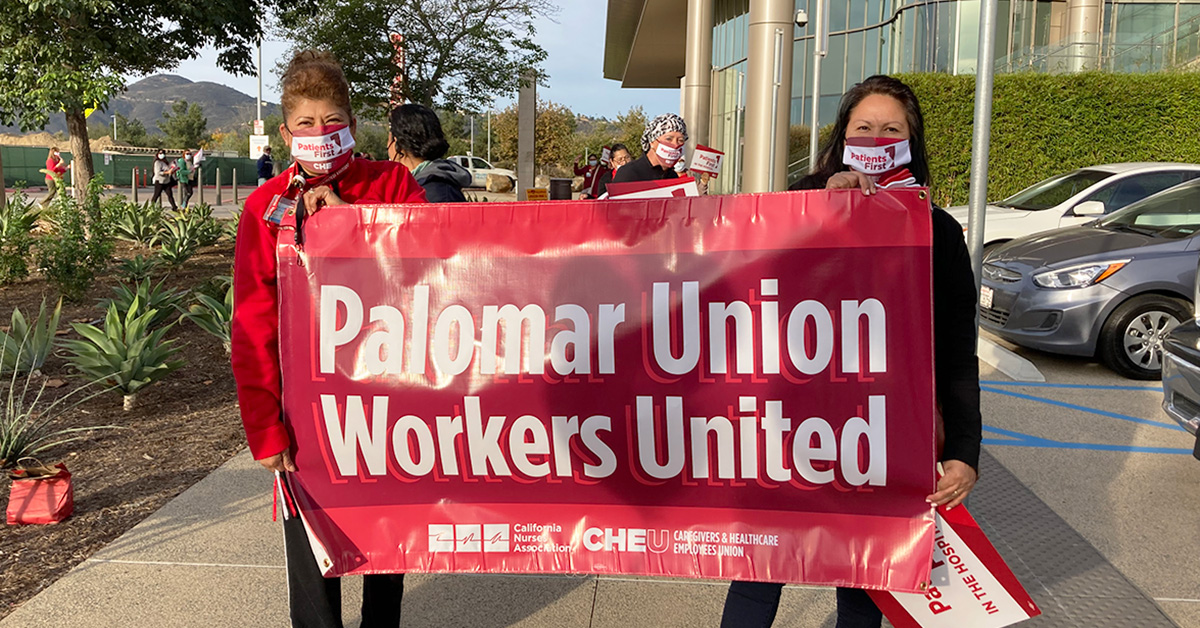 Registered nurses and caregivers at Palomar Health in Escondido and Poway, Calif. voted by 96% on June 7 and 8 to authorize their bargaining team to call a strike protesting Palomar Health’s refusal to bargain in good faith for a new contract, announced the California Nurses Association (CNA) and the Caregivers and Healthcare Employees Union (CHEU) today.

Registered nurses and caregivers have been at the table negotiating a successor contract for 14 months, raising serious unsafe patient care and nursing practice concerns that negatively impact patients in the community. Palomar Health has refused to bargain in good faith from the start of negotiations, and engaged in flagrant violations of labor law, leading the union to file unfair labor practice (ULP) charges with the California Public Employment Relations Board (PERB).

“For over a year, we have been at the bargaining table and Palomar Health has refused to bargain in good faith. They declared an unlawful impasse and imposed terms and conditions without agreement from the union,” said Grace Vicente, a nurse’s aide in the medical surgical unit at Poway Medical Center. “They ignored our demands to make improvements for safe patient care. We can’t provide the best care without a strong union contract that protects us and our patients and attracts and retains excellent nurses and caregivers. After all that we have sacrificed during the height of the pandemic, we are disappointed by Palomar’s actions.”

“Going on strike is a last-resort effort. RNs and caregivers have been negotiating with the intent to have a fair contract and unfortunately Palomar Health has violated our rights by engaging in unfair labor practices that include bargaining in bad faith, surveilling, intimidating, and retaliating against union members who speak out against the injustices we are facing,” said home health RN Glynn Cascolan. “As patient advocates, we understand that our labor rights and our union help us protect our patients and speak out about problems without fear of retaliation.”

According to nurses and caregivers, over the last 14 months, they have approached hospital management with several proposals to address safe staffing, health and safety, and the recruitment and retention of RNs and caregivers. During this time, Palomar management continued to violate the law and bargain in bad faith, pushing proposals they knew would not be accepted by the union. Palomar also failed to provide relevant information, and instituted unilateral changes without bargaining with the union.

According to nurses and caregivers, Palomar is intentionally running many units with a skeleton staff including the ICU trauma II unit, and the emergency department (ED) at Escondido, where delays in care are literally a matter of life and death. Nurses and caregivers also note that drastic cuts in ancillary staff have compromised hygiene and sanitation at Palomar facilities. There is not enough staff to adequately clean the ED, patient rooms, bathrooms, and other areas of the hospital, they say, and this is particularly dangerous during an ongoing pandemic.

RNs and caregivers point out that Palomar has the resources to invest in patient care despite management’s claims to the contrary, noting how management has diverted funds to non-patient-care expenses, such as the CEO’s million dollar-plus compensation package and a recent flood of promotional television and radio ads.

No strike date has been set at this time and should the bargaining team decide to move forward with a strike, nurses and caregivers will provide Palomar Health and the public 10 days’ advance notice.

California Nurses Association is an affiliate of National Nurses United, the largest and fastest-growing union and professional association of RNs in the country, with more than 175,000 members nationwide.