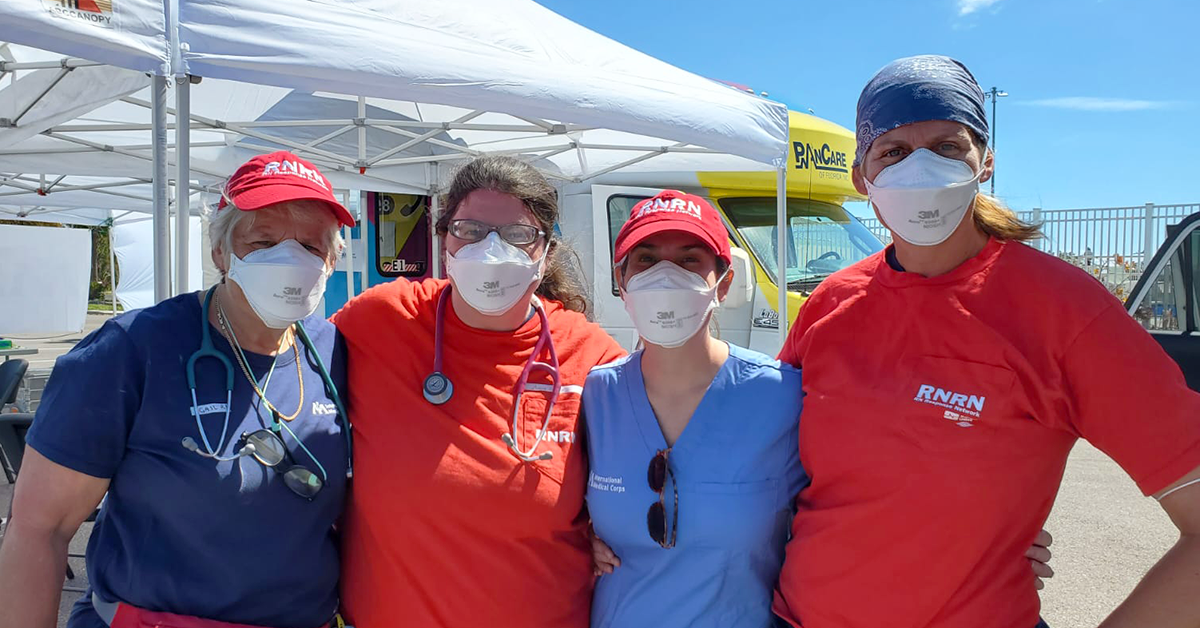 Registered Nurse Response Network (RNRN), in partnership with International Medical Corps, deployed a team of nurse volunteers to Florida earlier this month to help provide medical assistance in the wake of Hurricane Ian. The RNRN team of four nurses returned yesterday from their two-week deployment.

RNRN is a disaster-relief project of the California Nurses Foundation (CNF) and National Nurses United (NNU). Since its formation in 2005, RNRN has sent teams of nurses to help following disasters in locations across the United States and around the world.

The RNRN nurses traveled to Florida on Oct. 3, five days after the Category 4 hurricane hit the southwest coast of Florida. The RNs hit the ground running on Oct. 4 in the southwest coast community of Port Charlotte, helping to staff the mobile medical unit (MMU) of International Medical Corps, which has been working closely with the Florida Department of Health to provide services in communities with the greatest need.

The RNRN team began their deployment in Port Charlotte, staffing the clinic and going door-to-door to let people know that a mobile medical unit was available to provide health services. “When we arrived in Port Charlotte, there was no power, no water,” recalled Venessa Soldo-Jones, RN in the emergency department at Mercy Hospital in Coon Rapids, Minn. “People needed electricity to run their oxygen or to refrigerate their insulin. People also just needed to talk. There was a need for mental health services.”

“We did wellness checks as we went door-to-door and if someone needed a generator, we got them a generator,” said Tammi Bachecki, a trauma ICU nurse at Kaiser Vacaville Medical Center in Vacaville, Calif. “If people needed prescriptions filled, we told them to come to the mobile clinic, where doctors could prescribe medications.”

The disaster relief team identified which pharmacies were open so people could get their prescriptions filled. At the state’s request, on Oct. 7 the MMU relocated to Englewood, setting up in the parking lot of a shelter for displaced people. At the second location, the RNRN team saw Englewood residents as well as displaced people.

“We saw people who were unable to manage chronic illnesses like diabetes and hypertension,” said Soldo-Jones, who has also volunteered on five other RNRN disaster relief deployments, including Hurricane Maria in Puerto Rico, Hurricane Michael in Florida, and Hurricane Dorian in Grand Bahama Island. “People also showed up with Covid-like symptoms or respiratory illness due to mold in their homes. People needed wound care for injuries that they sustained either during the storm or afterward. We were able to give them tetanus shots provided by the state department of health.”

“It was amazing to see the community come together to help each other,” said Bachecki. “People took in neighbors and were sharing resources.”

RNRN, a project of NNU and the California Nurses Foundation and a 501(c)(3) nonprofit, is a national network of direct-care RNs powered by National Nurses United that coordinates sending volunteer RNs to disaster-stricken areas where and when they are needed. Interested RNs can sign up here to volunteer.