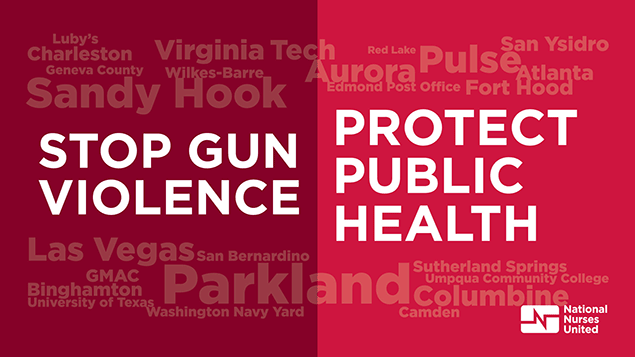 National Nurses United today joined with millions of others in calling for meaningful action in response to yesterday’s shooting at the Gilroy Garlic Festival in Gilroy, California, as well as similar shootings across the United States this year alone.

“These horrific mass shootings are not only a terrible tragedy for the families involved, but a growing public health emergency,” said NNU President Jean Ross, RN.

“We must take gun violence as seriously as any public health crisis that affects patients, their families, and all of our communities. It is as critical as any other social issue that causes death, pain and suffering, whether from environmental causes, homelessness, mental health, or any other societal crisis,” added NNU Executive Director Bonnie Castillo, RN.

“When gun violence threatens the life and safety of children, there is a particular urgency to insist on public policy reforms to stem this plague,” said Ross, noting that NNU and its affiliates have supported a broad range of gun reforms.

Gun violence is a leading cause of premature death in the United States, the American Public Health Association notes. Guns kill more than 38,000 people and cause nearly 85,000 injuries each year. Gun associated homicides are the second leading cause of death for young people aged 15 to 24.

Patients of this tragedy were taken to nearby health care facilities, including Regional Medical Center and Santa Clara Valley Medical Center in San Jose, and St. Louise Regional Hospital in Gilroy.

“We are grieving not only as nurses taking care of our patients but also as members of the community,” said Monica Ramos, RN, who works in the maternal child health department at St. Louise Regional.

NNU has long stressed that personal safety is a health issue, and that “as nurses we are dedicated to healing and alleviating human suffering that begins with prevention,” Ramos said. “Confronting gun violence must be part of that prevention.”