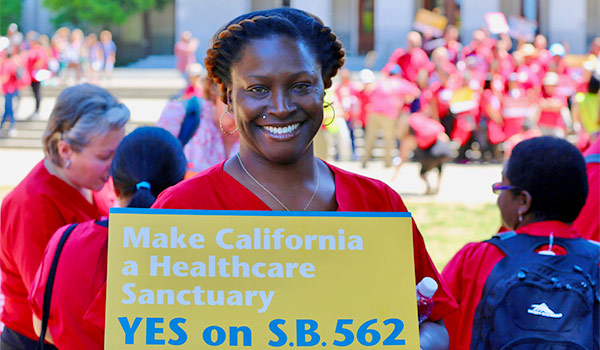 A full 70 percent of Californians favor establishing a public, Medicare for all type system providing universal single-payer health coverage, with lower costs for all Californians, as proposed in the Healthy California Act, SB 562.

Moreover, even after hearing the main opposition arguments to SB 562, a strong majority, by up to 58 percent say they still support the goals of SB 562. Less than a third oppose it.

That’s the findings of a new public opinion poll by the Tulchin Research firm, from a survey of 600 likely November 2018 California voters May 25 to 29. The California Nurses Association/National Nurses United sponsored the poll.

Among the key findings:

Pollsters also read those interviewed specific arguments made by the insurance industry opponents of the bill, including the (unsubstantiated) claims that it would cost more than twice the current state budget, eliminate patient choices, and cost jobs, or shortchange other state priorities, contrasted with leading arguments for the bill.

The cost of health care was in a virtual tie with the cost of housing for what respondents believe is the “most serious problem facing California today.”

Among other results, 59 percent oppose the American Health Care Act recently passed by the U.S. Congress.

Nearly half of those surveyed live in the greater Los Angeles area, another 20 percent in the Bay Area, 45 percent were registered Democrats, 25 percent Republican, and 24 percent independent; 44 percent identified themselves as politically moderate, compared to 22 percent conservative and 32 percent liberal.

SB 562 is eligible for a vote by the California Senate this week. It would establish an improved Medicare for all type system in California. State Senators Ricardo Lara and Toni Atkins introduced the bill, joined by Senators Benjamin Allen, Cathleen Galgiani, Mike McGuire, Nancy Skinner, and Scott Wiener as co-authors. CNA is the primary sponsor of the bill, joined by the Healthy California Campaign.