In New NNU Ad for Sanders: Rep. Tulsi Gabbard On Veterans Health and War: The Choice is Clear 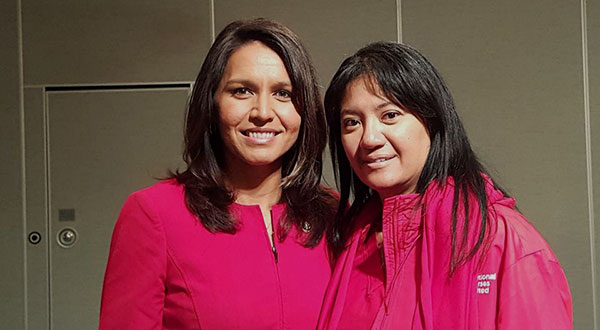 The ad with Gabbard, who served two tours of duty in the Middle East and a former vice chair of the Democratic National Committee, is running in several upcoming states where caucuses and primaries have yet to be held.

Click the play button below to listen to ad.

NNU the nation’s largest organization of nurses represents thousands of nurses in 23 VA facilities from coast to coast among its 185,000 members.

“We are honored to be working with Rep. Gabbard who has repeatedly demonstrated her courage in service to her nation in war and peace, and as an advocate for veterans, as well as all Americans, at home,” said NNU co-president Jean Ross, RN.

In the ad, Gabbard, who stepped down from public office to serve two tours in the Middle East ultimately being awarded the Meritorious Service Medal, notes that “as a soldier and war veteran, I know the true cost of war is the lives and sacrifices of the brave troops who fight for us.”

Sanders, a former chair of the Senate Veterans’ Affairs Committee, “has worked hard to bring our veterans the care and benefits they’ve earned” as evidenced in his successful “bipartisan effort to guarantee our veterans access to healthcare wherever they are in America,” says Gabbard.

Going forward, Sanders, Gabbard says, “will make sure that we meet the health needs of every veteran, including dental care and mental health services. And he will fully restore the cuts made to military pensions.”

“The choice is clear: We can vote for candidates who will engage in more unnecessary wars of regime change. Or we can vote for Bernie Sanders, who will use our precious resources to nation-build here at home, while protecting and expanding our veterans’ benefits.”

NNU has repeatedly praised Sanders’ record and advocacy for veterans care, including standing up for the rights of VA nurses.

In addition to leading a bipartisan effort to pass the Veterans’ Access, Choice and Accountability Act to improve care and increase accountability at VA facilities, still the most expansive reform to address veterans care, Sanders also co-sponsored a post September 11 GI bill to allow a new generation of veterans, service members and dependents to earn a college degree, and co-sponsored legislation to ensure VA facilities meet the needs of women veterans.

In his platform, Sanders also calls for full funding and expansion of the critical VA program “so that every veteran gets the care he or she has earned and deserved,” improve processing of veterans compensation claims, expanding veterans mental health services, and making dental care available to all veterans through the VA.

NNU, the nation’s largest nurses organization, was the first national organization to endorse Sanders, and nurses have campaigned for Sanders across the U.S.