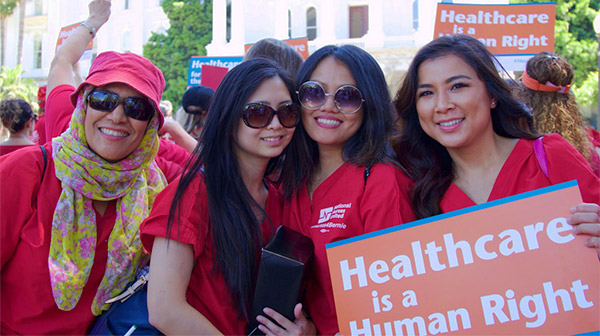 SB 562, the Healthy California Act, would cut current spending on healthcare in California by 18 percent – and produce substantial savings for households in healthcare costs as a share of their income, and California businesses, which would also see reduced payroll costs for health care expenditures, according to new research findings released today.

Most importantly, the bill would guarantee full health coverage for all Californians, without the devastating deductibles and co-pays that prompt many to ration needed care. The study notes that 36 percent of all insured Californians, 12 million people, remain underinsured – paying for premiums but often unable to access care due to high out of pocket costs – and another 7.5 percent, 2.7 million Californians, remain fully uninsured, even with improvements under the Affordable Care Act.

Significantly the proposed plan would sharply reduce what middle-income California families now spend out of pocket for health care costs as a share of their income by up to 9 percent.

In sum – the savings amount to a 9 percent raise for California workers.

California businesses who currently provide health benefits for employees would also see a decline in their payroll costs by up to 22 percent for small businesses and up to 13 percent for medium size businesses – with the added benefit of a healthier, more productive population.

That’s the findings of an “Economic Analysis of the Healthy California Single-Payer Health Care Proposal (SB 562),” a research study by a team of economists at the Political Economy Research Institute (PERI) at the University of Massachusetts Amherst, led by Dr. Robert Pollin, a premiere U.S. economist and author of a number of books on economic policy. Dr. James Heintz, Dr. Peter Arno, and Dr. Jeannette Wicks-Lim, all of PERI, also authored the study. The California Nurses Association/National Nurses United sponsored the study.

Under the Healthy California Act, California’s total spending on health care, with savings of 18 percent produced by reductions in administrative costs, the use of state bulk purchasing power, and improved patient care delivery, would drop to $331 billion. But that figure includes $225 billion of current taxpayer funded spending on Medicare, Medicaid, tax subsidies paid to insurers for health expenses of families and households.

With the savings produced by a single payer financing system, and the transfer of the 71 percent of taxpayer funded spending currently by Medicare, Medicaid and taxpayer subsidies to insurers for partial payment private insurance costs for families and households, an additional $106 billion will be needed – replacing the huge burden of what Californians now pay to insurers and other health care corporations in premiums, deductibles, co-pays and other out-of-pocket health care costs, and the social impact that imposes for people who skip needed care due to debilitating cost.

The study proposes achieving that added revenue through two modest taxes, a 2.3 percent on gross business revenue receipts – exempting the first $2 million in receipts to eliminate the cost for small businesses – and a new 2.3 percent sales tax that would exempt all spending on housing, utilities, services, and food at home, to mitigate the impact for low and moderate income Californians. The lowest income Californians would receive a tax credit, fully offsetting their tax share.

“What this new study proves is that we can finally achieve the dream of guaranteeing health care for all Californians, without the punishment of crippling out of pocket costs, at far less than what was predicted by those who make enormous profits off the pain and suffering of everyday Californians,” said RoseAnn DeMoro, CNA/NNU executive director.

“We know from the experiences of other countries across the world that we can reduce overall spending, and produce a more effective, humane health care system. Now it is up to us as a society to decide what are our priorities, what we consider should be the responsibility to ensure that health care is a right, a public good, and the moral choice to make as a people,” DeMoro said.

SB 562 is eligible for a vote by the California Senate this week. It would establish an improved Medicare for all type system in California. State Senators Ricardo Lara and Toni G. Atkins introduced the bill, joined by Senators Benjamin Allen, Cathleen Galgiani, Mike McGuire, Nancy Skinner, and Scott Wiener as co-authors. CNA is the primary sponsor of the bill, joined by the Healthy California Campaign.

The threat of repeal of the ACA by Congress and the Trump Administration would further exacerbate the health crisis for many, making SB 562 even more timely.