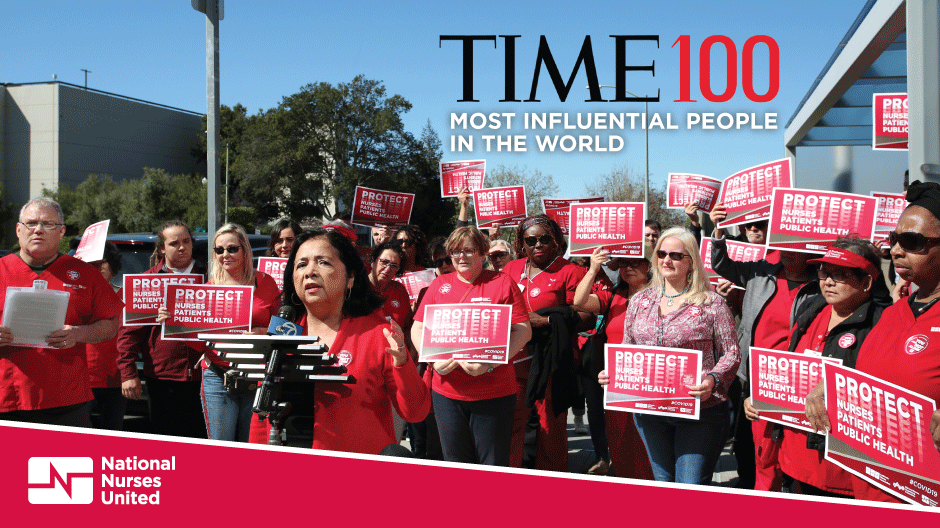 Bonnie Castillo, RN, executive director of National Nurses United, the nation’s largest union of registered nurses, has been named by TIME to the 2020 TIME 100, its annual list of the most influential people in the world.

“This award is a great honor for all of our nurse members, across the country, and for nurses everywhere, union and non-union,” said Castillo. “Nurses understand the social determinants of health—and how so much injustice in our society is amplified by Covid-19. As we advocate for our patients at the crossroads of so many critical issues, this award lets nurses everywhere know that our expertise is recognized, and it validates our fight to speak truth to power.”

The full list and related tributes appear in the October 5, 2020 issue of TIME, available on newsstands on Friday, September 25, and now at time.com/time100. The list, now in its seventeenth year, recognizes the activism, innovation and achievement of the world¹s most influential individuals.

NNU and its affiliates are renown for longtime leadership in the fight for Medicare for All, for negotiating many of the best union contracts for RNs in the nation, for sponsorship of innovative legislation and regulatory protections for patients and nurses, and in 2020, for being a prominent and unrelenting voice demanding Covid-19 protections for nurses and other frontline workers.

As a registered nurse herself, Castillo said she understood from the earliest reports of a rapidly spreading novel coronavirus that nurses would have to stand up and speak out at every level of power for optimal personal protective equipment (PPE). Beginning in January, under Castillo’s leadership, NNU began sending letters to the World Health Organization, the Centers for Disease Control and Prevention, the Trump Administration, the Occupational Safety and Health Administration, and other agencies and officials, demanding that nurses have the highest level of protections.

“As patient advocates, nurses have been telling our employers and the government all along, ‘You must follow science.’ And that means following the precautionary principle, which says we must use the highest level of protections, not the lowest, unless there is scientific proof otherwise. The virus is new, but the infection control is not,” said Castillo.

In what Castillo refers to as “a fight for our lives,” National Nurses United has also held more than 1,500 actions at facilities across the country since April, held two protests at the White House, spoken out in hundreds of news reports, and conducted several surveys of registered nurses across the country to track their experience during Covid-19. Additionally, the union completed a highly ambitious project to text every nurse in the country, to offer support and resources during Covid-19. Using peer-to-peer texting technology, driven by over 500 volunteers, NNU sent millions of texts to nurses across the country.

While NNU nurses have won victories at some of facilities, Castillo said nurses are still fighting an uphill battle for optimal protections, and that nurses hope the TIME 100 award keeps a focus on that fight.

“We hope any attention received through this incredible honor inspires the public to stand with nurses in our demands that President Trump activate the Defense Production Act to mass produce PPE, and that federal OSHA pass an emergency temporary standard on infectious diseases,” said Castillo. “This award lets us know that our voice of patient advocacy is louder and more resonant than ever before. It means everything to receive such a prestigious award in confirmation that the world is listening to nurses.”