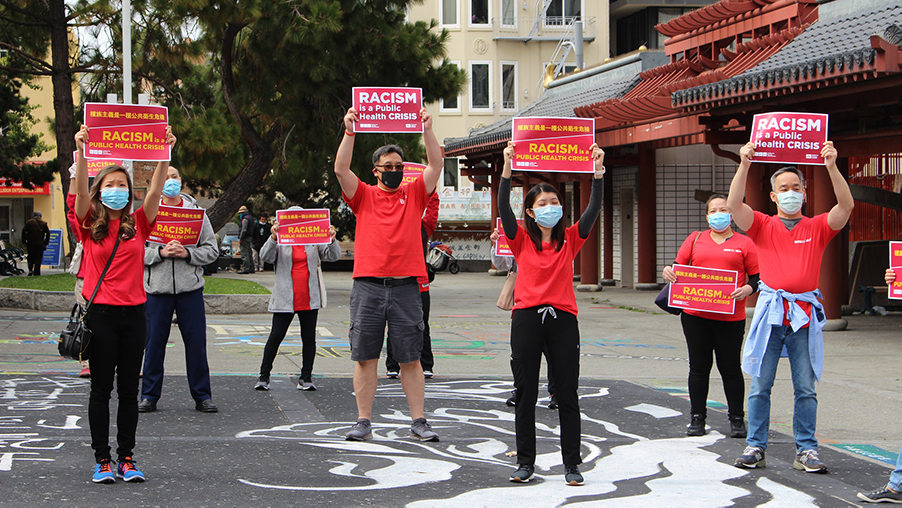 National Nurses United (NNU) today voiced outrage at ongoing racist and xenophobic attacks against Asian Americans and Pacific Islanders (AAPI), with video footage of violent assaults on elders within the AAPI community, with one leading to death, only the most recent examples in a dramatic escalation of documented hate incidents since the beginning of the Covid-19 pandemic. NNU called for solidarity with AAPI communities, and a public commitment to solutions premised on ending structural racism and promoting social equity and healing.

“Former President Trump, with his demagogic anti-Chinese rhetoric, especially in labeling the pandemic the ‘China virus’ throughout the pandemic, may be gone, but the legacy of the bigotry he encouraged continues to damage our nation,” said NNU Executive Director Bonnie Castillo, RN. “An attack on our AAPI neighbors and communities is an assault on us all, and we have an obligation as a society to condemn and prevent it.”

NNU supports approaches advanced by a Bay Area coalition of 72 AAPI community organizations, including: Ensuring victims and survivors of all backgrounds and language abilities receive full supportive services to recover and heal; expanded intervention- and prevention-based programs that invest in basic needs and community-based infrastructure to end the cycle of violence to help keep people safe; and greater cross-community public education that humanizes, rather than promoting demonization and scapegoating of any community of color.

The rise in attacks and abuse has been especially harmful to the youngest and eldest members of AAPI communities, said NNU President Zenei Triunfo-Cortez, RN, making “far too many fearful of daily public activities,” and, as AAPI activists have noted, “inadequate culturally-competent, and language accessible support.”

“We should also recognize and respond to these attacks as part of the growing public health crisis in our country that has been exacerbated by the pandemic, but that has had a particularly harmful impact on communities of color, including AAPI residents,” said Castillo. “Some of the individual attacks are also driven by the ongoing economic crisis with critically needed, and long-term cuts in mental health services and programs.”

“As nurses, we know that working to achieve social equity is ultimately at the heart of ensuring public health and safety for all,” Cortez said.

The rise of anti-AAPI hate incidents during the pandemic is appalling for nurses, many of whom are of Asian descent. As members of the AAPI community, they experience structural racism first hand. For example, while nurses of Philippines descent represent 4 percent of all U.S. registered nurses, they have disproportionately suffered 31.5 percent of Covid-19 RN deaths, according to a September 2020 NNU study.

Castillo also cited a direct line to 150 years of anti-Asian structural racism in the United States, including the 1882 Chinese Exclusion Act, the first major U.S. law restricting immigration into the country; an expanded anti-immigrant law targeting all Asians in 1924; and the imprisonment of Americans of Japanese descent during World War II.

Anti-AAPI hate speech and attacks are also a reflection of the overall rise in racist rhetoric and attacks on all communities of color during the Trump years. “The danger to the fabric of this nation was emphasized by the white supremacist ideology that was a major factor behind the failed insurrection against Congress last month,” Castillo added.

“Uniting to challenge all racist ideology and practices, and promoting community-led public health, solidarity, and physical safety for all of our people, must be a foremost priority for healing as a nation,” said Castillo. “Nurses will be at the forefront of that effort.”