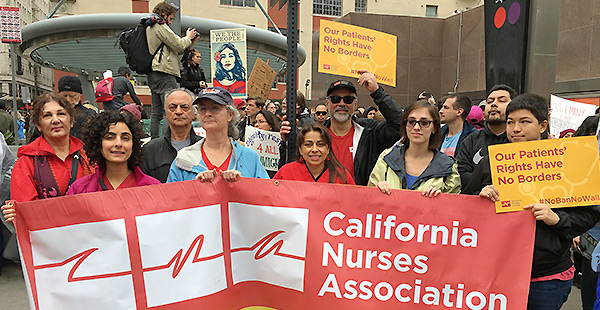 National Nurses United (NNU) today repeated its call on the Trump administration to withdraw its threat to terminate the highly successful Deferred Action for Childhood Arrivals (DACA) program that has enabled young people who came to the U.S. undocumented as children to remain in the U.S.

News reports today quoted the President saying he would make a decision on DACA “sometime today or over the weekend.”

The young people who have been protected from being torn apart from their families and their communities by DACA should have the right to continue to contribute to our society,” said NNU Co-President Deborah Burger, RN.

Some 800,000 young people covered by DACA, implemented under the Obama administration, are permitted to apply for work permits that need to be renewed every two years. If the program is terminated, they would face the threat of deportation.

“At a time when the words and actions of this administration have encouraged white supremacists and others who foment racial hatred and division, targeting these law abiding young people who work, study, and have become valuable members of our diverse nation, would send a dreadful message to our nation,” said Burger.

“Revoking DACA would also be an abrogation of the President’s call in a speech in Reno this week for ‘national unity’ and healing ‘the wounds that divide us’,” said Burger. “Ending this humane program would exacerbate and inflame those wounds. After Charlottesville, the message of terminating DACA could not be worse.”

“Millions of families in our nation have already been traumatized by the escalation of deportations of peaceful, law abiding undocumented immigrants,” Burger continued. “We see more and more people, who work and pay taxes, fearful of getting the health care they need when they are sick, or interacting with other components of civil society. That is wrong, and immoral.”

Ending the DACA program would also repudiate a promise President Trump made in April when he said young beneficiaries of the program could “rest easy” because the priority of his deportation policy was on targeting criminals.  “That would be an unconscionable reversal, similar to the ones we’ve seen in the President’s reversal on his promises not to support cuts in Medicare or Medicaid,” Burger noted.

Instead of threatening young people in the DACA program, NNU supports a comprehensive federal program of humane immigration reform, premised on a path to citizenship for those who reside in the U.S., and an end to arbitrary raids and deportations of non-violent immigrants.