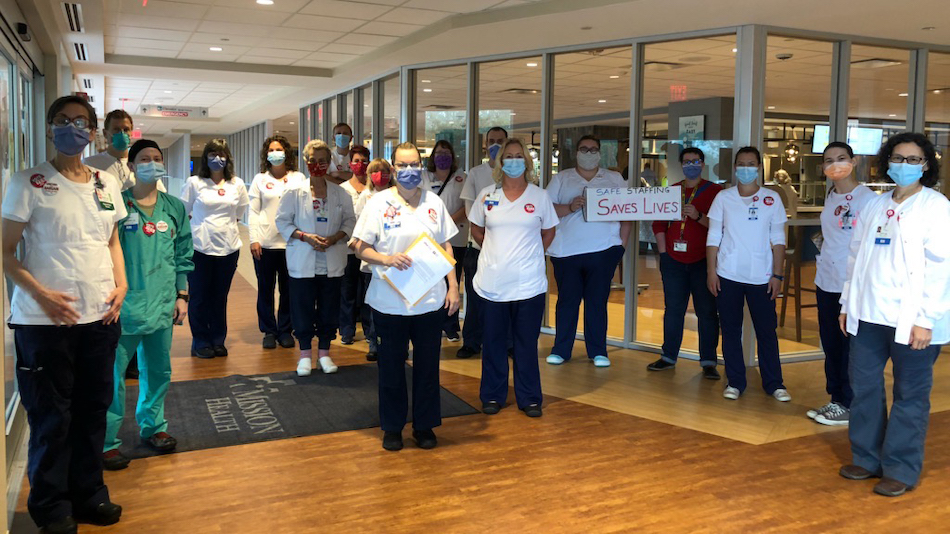 It’s a new day at HCA’s Mission Hospital in Asheville, North Carolina, for registered nurses, for their patients, their community, and as a message to nurses and all workers across the South.

In the first private sector hospital union election win in North Carolina, the largest at any nonunion hospital in the South since 1975 – RNs at Mission voted this week by a stunning 70 percent to join the nation’s largest RN union to secure a powerful voice for improved care and workplace safety. For labor as a whole, it is also believed to be the largest union election win in the South in 12 years.

The nurses voted by 965 to 411 –  a 70 percent landslide – to join the National Nurses Organizing Committee/National Nurses United, in a secret, mail-in ballot election conducted and counted by the National Labor Relations Board (NLRB). The vote count was completed early Thursday morning.

Along the way, the Mission RNs prevailed over a heavily funded anti-union campaign by the hospital owner, HCA, the largest hospital system in the United States, and arguably the most politically and economically influential giant in the hospital industry.

The nurses endured months of delay before the election was held in a state with the second lowest unionization rate in the country. They confronted a regulatory climate hostile to unions and workers’ rights passed down by corporate interests and the Trump administration. They also faced the added challenge of conducting a huge union organizing campaign in the midst of the most dangerous pandemic in a century.

“We could not be more proud of the unity, the perseverance, and the patient advocacy and dedication of the Mission RNs to their patients, their colleagues, and their community,” said NNU and NNOC Executive Director Bonnie Castillo, RN. “At a time when nurses are in a daily battle with the deadly fight for their patients and their own lives in the era of COVID-19, they have demonstrated incomparable courage and resilience that is an inspiration to all of us.”

“We’re all thrilled that we’ve finally won,” said Lesley Bruce, RN, who works in chest pain observation at Mission. “This victory means we can use our collective voice to advocate for patient safety and safer staffing. I can’t wait to see what improvement we’ll win together.”

“Throughout the entire campaign, we’ve been acutely aware that this fight isn’t just for us and our working conditions--this is about the health and well-being of our community,” said Kelly Graham, palliative care RN. “We have been blessed with so much support from our Asheville neighbors, who understand that our working conditions have an enormous impact on public health.”

The Mission RNs began their drive for representation in the wake of HCA’s February 2019 corporate takeover of the former community hospital, which was followed by a rapid decline in patient care conditions at the hospital, as noted by nurses and community residents.

“Only a few months into the HCA buyout, we started to see dramatic decreases in the amount of staff and resources we had across the hospital,” said Fischer. “The nurse-to-patient ratios started to get much worse, equipment was replaced with cheaper versions, and certified nurse assistants, housekeepers, security, and phlebotomists, along with many other staff were let go in unprecedented levels.”

HCA told the nurses that “nothing would change for at least a year and a half,” recalled Amy Waters, RN in pediatric ICU. The RNs “did our own research and decided NNU was the right union for us.” Despite what she said is an often-heard view that “you don’t talk about unions in the South,” the nurses came to understand that “collective action gave us the ability to overcome that.”

In early March this year, the RNs filed their petition with the NLRB for a union election, and then had to wait and wait for six months before being able to vote – wait times for elections under the management-dominated Trump NLRB have generally doubled, giving employers more time to pressure workers to vote against union representation.

“During the time in between, we grew close as a group of nurses,” said Waters. “I met nurses from all over the hospital and we fought together through petitions, actions to address our concerns over patient care conditions, and the need for better protection against the virus and we were able to win victories. Staying active kept our unity, and the promise of a collective voice to win greater improvements.”

The strong support of the Asheville community – from elected leaders and the faith community to local organizations and their neighbors – was crucial for the nurses.

“Our families, friends and fellow citizens rely on the care we provide here,” said Hannah Drummond, a trauma care unit RN. “Their overwhelming love and support remind me of why we’re doing this. They gave us strength. I’m so grateful this victory will allow us to be better advocates for our community.”

Next up, the nurses will elect a team to represent them in contract negotiations with management for their first union contract.

“This victory is just the beginning,” said Alex Kimbro, a recovery room RN at Mission. “We are looking forward to bargaining for a fair contract to improve patient safety, as well as competitive wages to keep Asheville nurses working here in our community. We are more than ready to win the next chapter too.”