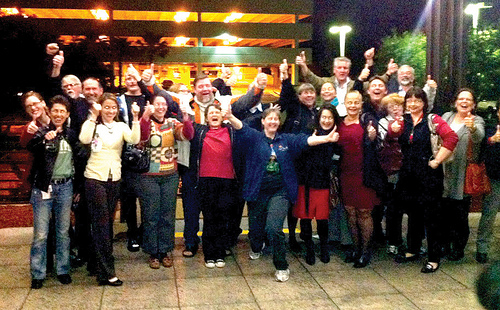 National Nurses Organizing Committee-Florida is adding more Florida RNs to its rapidly growing family. Registered nurses at two campuses of Largo Medical Center in Largo, Fla. voted Thursday night to join with their colleagues from four other Florida hospitals who have opted to affiliate with the nation’s largest union and professional association of nurses.

The vote was 170 to 77, 69 percent in a secret ballot election conducted by the National Labor Relations Board. The vote affects 400 RNs at the Largo Medical Center’s main campus and Indian Rocks campus who will now be represented by NNOC-Florida which is a part of the 160,000-member National Nurses United.

With this vote, the Pinellas County RNs follow their colleagues at Fawcett Memorial Hospital in Port Charlotte, Fla., Community Hospital in New Port Richey, Fla., Central Florida Regional Hospital in Sanford, Fla., and Osceola Regional Medical Center in Kissimmee, Fla. who have also voted to join NNOC-Florida/NNU in the past two weeks.

All five hospitals are part of HCA (Hospital Corporation of America) the largest hospital system in the U.S. NNU has now won elections for RNs at 12 HCA hospitals this year in Texas, Nevada, and Missouri as well as Florida.

Ratios are one of several issues the RNs say they plan to pursue with their new, unified voice, along with  improved procedures for floating (assignment of RNs beyond their areas of clinical expertise and experience), improved economic standards including better retirement security in pensions and medical coverage.

National Nurses United is the nation’s largest union and professional association of registered nurses with 160,000 members from coast to coast