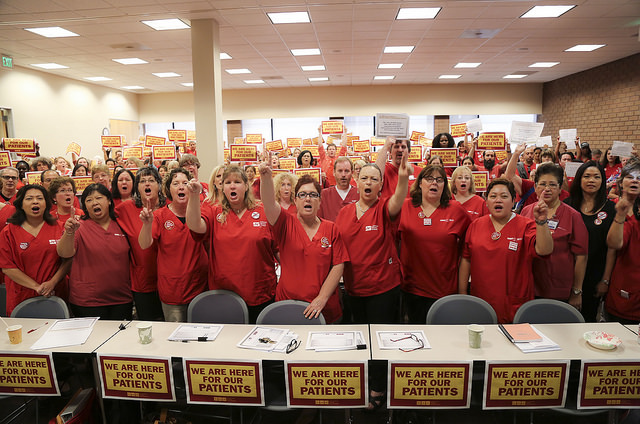 With Kaiser Permanente registered nurses stepping up their alarm about the erosion of patient care standards, Kaiser officials Thursday once again failed to attend a planned collective bargaining session with RN nurse negotiators.

Kaiser refused to join talks today even though the RNs went to a site for negotiations, at an Oakland hotel, that Kaiser had proposed, the California Nurses Association, National Nurses United, which represents 18,000 Kaiser RNs at 21 hospitals and 66 clinics announced.

Today’s absence marks the third straight week that Kaiser officials have put off or failed to attend negotiations, a step the RNs charge is driven by Kaiser’s desire to avoid addressing the RNs’ widespread concerns about erosion of care standards.

“Kaiser has sought to impose how the talks should proceed, even when we have offered to change past practice and meet in what they say they want in a supposed neutral environment. What is really occurring is that Kaiser is trying to avoid confronting what is occurring every day in their hospitals, and the need to have solutions to protect their patients,” said CNA Co-president Zenei Cortez, RN, chair of the Kaiser RN bargaining team.

In the interim, Kaiser RNs have presented many of the ways patient care is under attack, and are inviting Kaiser members to send their stories, emailed to patientcare@calnurses.org.

CNA then offered to meet today at a “neutral” Oakland church, which Kaiser rejected, and then at an Oakland hotel that Kaiser has previously proposed. The conference room at the hotel was set up for the talks. Kaiser again refused to participate.

“We have been ready since day one to move forward,” said Cortez. “It’s time for Kaiser to stop putting forward artificial obstacles so we can talk about patient safety and the growing erosion of patient care standards.”

These problems have occurred as Kaiser profits for the first quarter of 2014 jumped to $1.1 billion, a 44 percent increase over the same quarter last year. Its operating revenues were up 6 percent  and operating profits up 49 percent during the same period. Last year, Kaiser made $2.7 billion in profits.

Additionally, Kaiser has accumulated a $21.7 billion reserve fund, 1,626 percent more than required by the state, a clear indication on top of the nearly $4 billion in profits the past 15 months that cuts in care are unnecessary, says CNA.