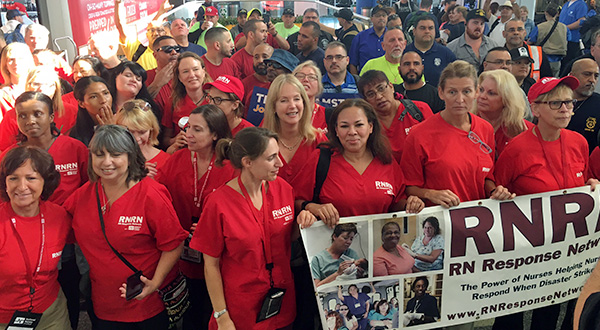 A large delegation of 50 volunteer registered nurses from across the U.S. joined a unique, multi-union two-week disaster relief effort heading to Puerto Rico Wednesday morning to provide medical aid in the wake of the ongoing humanitarian crisis following Hurricane Maria. The nurses are part of the Registered Nurse Response Network, a disaster relief program sponsored by National Nurses United, who are among 300 union members brought together by the AFL-CIO for the relief mission to Puerto Rico.

"As nurses whenever there's a call and there's an ask, we go. From the reports I've heard especially the elderly that have been without oxygen, without food or water, are at risk, everyone's at risk but particularly the children and the elderly," said Cathy Kennedy, RN an NNU Vice President and a volunteer with the Puerto Rico deployment.

"Nurses are good. We get right in there and do it. So whatever their needs are we'll take care of them," said RN Sharon Esguerra, Kaiser Roseville. "Today I turned 65 and I feel it's time to stretch, move out of my comfort zone so I'm very ready for this relief mission." 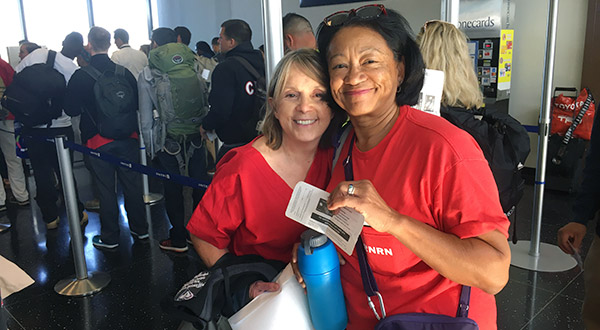 The AFL-CIO is working directly with the Puerto Rican Federation of Labor as well as the San Juan mayor’s office.

In Puerto Rico, the RNs will focus on immediate medical needs in local hospitals, nursing homes, and other sites based on immediate need for island residents who have endured unprecedented devastation as a result of the super storm.  They will be filling needs identified by the San Juan Mayor’s office as well as other local officials.

Press reports have indicated that in addition to the general poor conditions, hospitals have been overwhelmed struggling to meet medical needs, clinics and doctor’s offices have failed to re-open, patients with chronic illnesses have not had access to needed medications, and concerns are emerging about the potential of cholera and other epidemics.

RNRN has more than 12 years of experience in providing disaster medical aid following global emergencies dating back to Hurricane Katrina and the deadly South Asia tsunami. Most recently, RNRN volunteers worked in a convention center in Houston and other locales in South Texas after Hurricane Harvey.

RNRN volunteer nurses have cared for thousands of patients during disaster relief and humanitarian assistance deployments that include the South Asian tsunami (2004); Hurricanes Katrina and Rita (2005); the Haiti earthquake (2010); Hurricane Sandy (2012); Super Typhoon Haiyan/Yolanda (2013) and the Continuing Promise 2010 and 2015 humanitarian missions with the Department of Defense. RNRN volunteers have also provided first aid and basic response services to hundreds of community events across the country, as well as rotating teams who assisted the water protectors in Standing Rock in 2016. RNRN is powered by NNU, the largest organization of registered nurses in the U.S.