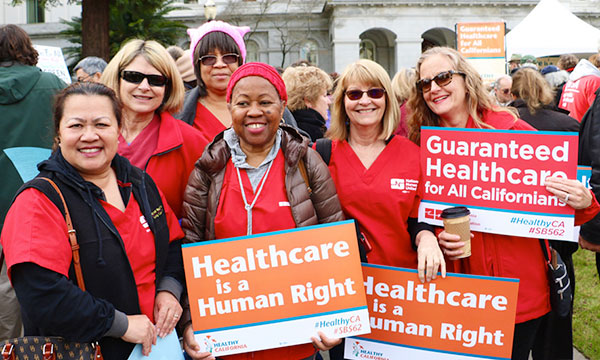 "We need SB 562 because it will expand healthcare to all and save billions of dollars at the same time."

The campaign for the Healthy California Act is inviting area residents to a community briefing in Roseville on March 26 to learn about SB 562, a bill introduced in the California Senate last month that would guarantee healthcare to all Californians by establishing a Medicare for all type system.

"We are inviting our community to this briefing to learn about SB 562, the Healthy California Act, a plan to provide timely access to comprehensive care, including mental health, dental and vision," said Tina Rufo RN, who has worked at Kaiser Roseville since it opened in 1998.

"I work in the Cardiology Department and I see far too many people delaying the monitoring they require and consequently the treatment they need to avoid life-threatening conditions, because they can't afford high premiums, deductibles and co-pays. We need SB 562 because it will expand healthcare to all and save billions of dollars at the same time," said Rufo.

"Seniors are the biggest users of medical care in the country. We seniors get it. We know Medicare works," said Myron Wollin, a member of the California Alliance for Retired Americans. "The Healthy California Act, SB 562, will improve upon Medicare. We also want what’s best for our children and grandchildren. We have had enough of the insurance industry making a profit off of our health."

The California Senate Health Committee is expected to hold the first hearing on SB 562 in April. Advocates have planned a series of town halls and community briefings in districts represented by Senate Health Committee members to educate and mobilize their constituents in support of the bill. Town halls have been held in Covina, Pomona, Riverside and Fullerton.

SB 562 takes on even greater urgency with the release of the Congressional Budget Office report last week on the Republican bill to “repeal and replace” the Affordable Care Act. The federal bill, said the CBO, would throw 24 million people off health coverage within the next decade, slash $880 billion from Medicaid, and sharply drive up out of pocket costs, especially for older Americans. In California an estimated 5 million people will lose health coverage due to the repeal of the ACA, over 4 million who have gained coverage through the expansion of Medi-Cal.

Senators Ricardo Lara (D-Bell Gardens), and Toni Atkins (D-San Diego) introduced SB 562 in February, with the California Nurses Association/National Nurses United (CNA/NNU) as the primary sponsor, and support from the Healthy California Campaign, comprised of organizations representing over four million Californians.  The bill declares that it is “the intent of the Legislature to enact legislation that would establish a comprehensive universal single-payer health coverage program and a healthcare cost control system for the benefit of all residents of the state.”