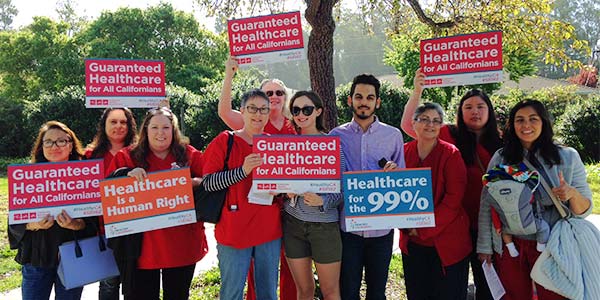 "When we have access to early and preventative care, there are benefits not just to our health, but to our work environment and economy."

The campaign for the Healthy California Act is inviting area residents to a community briefing in Santa Cruz, Calif. on Saturday, April 1 to learn about SB 562, a bill introduced in the California Senate last month that would guarantee healthcare to all Californians by establishing a Medicare for all type system.

“We’re excited to meet with the community to discuss the benefits of SB 562, the Healthy California Act, and to call for its support by Senator Bill Monning. As a member of the Senate Health Committee, Sen. Monning should champion SB 562 because when we all have access to early and preventative care, including mental health, dental and vision, there are benefits not just to our health, but to our work environment and our economy,” said Jennifer Holm, RN.

“How many patients have I taken care of who were in renal failure because they chose to pay rent instead of the glucometer strips needed to monitor their diabetes? How many babies have I held that were born prematurely because their mothers could not afford the copayment for prenatal care?” said Holm. “We can do better than this! Supporting SB562 is not only the ethical responsibility of every resident and legislator of our state--it is the moral imperative of a civilized society.”

"Seniors are the biggest users of medical care in the country. We seniors get it. We know Medicare works," said Myron Wollin, a member of the California Alliance for Retired Americans. "The Healthy California Act, SB 562, will improve upon Medicare. We also want what’s best for our children and grandchildren. We have had enough of the insurance industry making a profit off of our health."

The California Senate Health Committee is expected to hold the first hearing on SB 562 in April. Advocates have planned a series of town halls and community briefings in districts represented by Senate Health Committee members to educate and mobilize their constituents in support of the bill. Town halls have been held in Covina, Pomona, Riverside and Fullerton.

SB 562 takes on even greater urgency with the lingering uncertainty of healthcare nationally. Californians are standing up to say anything short of a single payer, Medicare For All system does not address the right of all patients to guaranteed, comprehensive healthcare—as a right and not just as a privilege.

The bill declares that it is “the intent of the Legislature to enact legislation that would establish a comprehensive universal single-payer health coverage program and a healthcare cost control system for the benefit of all residents of the state.”

Read the text of the bill at:
http://leginfo.legislature.ca.gov/faces/billTextClient.xhtml?bill_id=201720180SB562