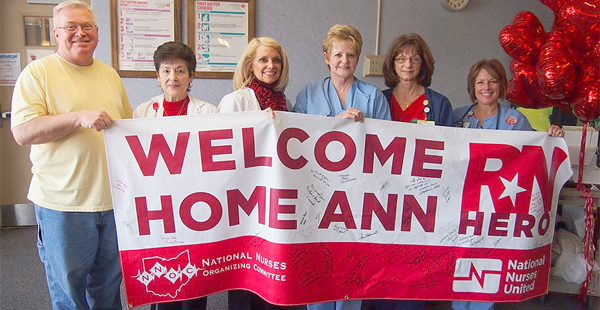 A civil jury has ordered an Ohio hospital, part of one of the most notorious anti-union hospital chains in the U.S., to pay over $2 million in damages for its actions against Ann Wayt, an Ohio nurse it fired, illegally sought to have her nursing license revoked, and then defamed in retaliation for her outspoken patient advocacy and support for her union.

In a unanimous verdict, the Stark County, Ohio jury Friday ordered Affinity Medical Center of Massillon, Oh., operated by Tennessee-based Community Health Systems chain, to pay Wayt $800,000 for defamation of her character and another $750,000 in punitive damages. Affinity was also ordered to pay her attorney fees.

The decision came over two years after Wayt was fired, and just over a year after a U.S. District Court Judge delivered a sweeping cease and desist injunction ordering Affinity to reinstate Wayt and end a broad array of lawless behavior in illegal discipline and harassment of its RNs as well as refusing to bargain with its RNs and their union, National Nurses Organizing Committee-Ohio. NNOC Ohio is the state affiliate of National Nurses United, the largest U.S. organization of RNs.

"NNU offers our heartfelt congratulations to Ann Wayt both for her steadfast advocacy for her patients and colleagues, and her refusal to be intimidated by a lawless employer,” said NNOC Co-President Malinda Markowitz, RN.

“This verdict should be a message to a particularly vindictive system, CHS, and to all hospitals across the nation that nurses will not be silent when you trample on their rights and try to silence their voice — and that our union will stand up with you," Markowitz added.

Affinity nurses reacted with joy to the jury decision. “Ann has shown that one nurse can hold a healthcare system accountable for its lies and deceptions,” said Affinity RN Debbie McKinney. “This should empower all nurses to stick together for what is best for our patients ourselves and our profession.”

“I am thrilled for Ann and that the Jury cleared her name and reputation. I am also thrilled that the verdict sends a message to Affinity Med. Center that they can not treat their nurses with such contempt,” said Wayt’s attorney Brian Zimmerman.

“It is inspiring to witness the solidarity and commitment of nurses who are always focused on winning the very best protections for their patients,” said NNOC-Ohio’s Michelle Mahon, RN, who testified for Wayt at the trial. “Through their unanimous verdict the jury has sent a message to CHS that this community will not tolerate their law breaking behavior.”

Nurses at Affinity voted in August 2012 to join NNOC-Ohio. Instead of respecting the democratic voice of the nurses and offering to work with them to improve patient care and nurse standards, CHS, which has gained infamy as one of the most anti-union and anti-worker chains in the hospital industry, immediately embarked on a campaign of harassment and retaliation.

Wayt, a prominent union supporter in the hospital’s orthopedics unit, where union support was “particularly strong,” as a National Labor Relations Board Judge Arthur Amchan later noted, was directly targeted, as symbolized by the decision of the hospital to begin an investigation against her on the very day of the election. NNOC-Ohio initiated the case by filing charges with the NLRB.

Affinity management then trumped up charges of patient care misconduct that Amchan termed in July 2013, “a pretext to retaliate against her for her union activity” despite a long “spotless” record as an RN. Affinity not only fired Wayt, it then went to the Ohio Board of Nursing attempting to pressure it to revoke Wayt’s nursing license.

Noting the clear violation of federal labor law rights, Amchan concluded “it is hard to imagine a more effective coercive message to the union supporters… than the termination of a long-term employee with no (or no known) prior disciplinary record.” Wayt has worked at Affinity for 24 years and in 2008 Affinity provided clear recognition of her achievements by presenting her the Nurse Excellence Award.

On the basis of that finding, U.S. District Court Judge John Adams in January, 2014, issued a stinging injunction against Affinity for illegal behavior, including the order to reinstate Wayt. Judge Adams found Affinity’s actions to be “inconsistent with disciplinary actions taken against other persons with similar alleged violations and disproportionate to the offense level.”

“Thank you Ann for staying strong! You have given us courage.  We are so pleased to see justice prevail for Ann and all Affinity RNs,” said Affinity RN Sarah Falanga following that ruling.

Though Affinity was forced to offer Wayt a return to the hospital bedside, it has failed to refrain from defamatory activity against her. Wayt responded with the civil suit that led to the verdict today. Affinity is also stalling in court-ordered bargaining with the nurses’ union.