California Senate Says "Yes" to Guaranteed Healthcare for All

Landmark Bill Moves on to Assembly After Key Win in Senate

With a critical vote from the California State Senate today, the universal healthcare train is moving forward in California.

On a 23 to 14 vote, the California Senate put their stamp of approval on SB 562, a Medicare for all-type/single payer bill that would bring the dream of guaranteeing health care to all Californians – without the devastating out of pocket costs that force millions to skip needed care even if they are already paying premiums to insurance companies.

Next SB 562 heads to the California Assembly where some eight Assembly members are already co-sponsors of the bill which is authored by Senators Ricardo Lara and Toni Atkins. If amended in the Assembly, the bill would return to the Senate for final approval before going to Gov. Jerry Brown.

“This is a banner day for California, and a moral model for the nation,” said RoseAnn DeMoro, executive director of the California Nurses Association and National Nurses United, lead sponsor of SB 562, the Healthy California Act.

“California Senators have sent an unmistakable message today to every Californian and people across the nation. We can act to end the nightmare of families who live in fear of getting sick and unable to get the care they need due to the enormous cost. We’ve shown that healthcare is not only a humanitarian imperative for the nation, it is politically feasible, and it is even the fiscally responsible step to take.”

DeMoro offered special thanks and praise to Sen. Lara and Sen. Atkins “for their leadership and courage in working to pass this landmark bill” and “the thousands of activists across California who have devoted hundreds of hours to engaging in grassroots campaigning to support SB 562 with phone calls, town halls, marches, rallies and countless other volunteer efforts.”

Momentum to pass the bill escalated Wednesday with the release of a major research study documenting that SB 562 would produce substantial savings for households in healthcare costs as a share of their income, and California businesses, which would also see reduced payroll costs for health care expenditures.

Significantly, the proposed plan would sharply reduce what middle-income California families now spend out of pocket for health care costs as a share of their income by up to 9 percent, effectively a 9 percent raise for California workers.

California businesses who currently provide health benefits for employees would also see a decline in their payroll costs by up to 22 percent for small businesses and up to 13 percent for medium size businesses – with the added benefit of a healthier, more productive population. 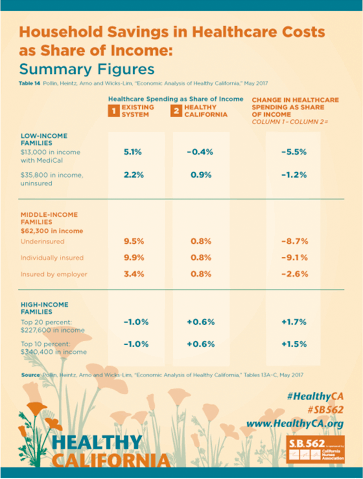 That’s the findings of an “Economic Analysis of the Healthy California Single-Payer Health Care Proposal (SB 562),” a research study by a team of economists at the Political Economy Research Institute (PERI) at the University of Massachusetts Amherst, led by Dr. Robert Pollin, a premiere U.S. economist and author of a number  of books on economic policy. Dr. James Heintz, Dr. Peter Arno, and Dr. Jeannette Wicks-Lim, all of PERI, also authored the study. The California Nurses Association/National Nurses United sponsored the study.

Pollin spoke at a Sacramento press conference Wednesday noting that the research illustrated that SB 562 would be “a windfall for small business” and an exceptional achievement for families as well. The study also shows how SB562 would cut current overall spending on healthcare in California by 18 percent.

Separately, CNA Wednesday also announced the findings of a new poll that showed 70 percent of Californians the goals set by SB 562, and 58 percent continue to support the bill even after hearing the main opposition arguments to SB 562.