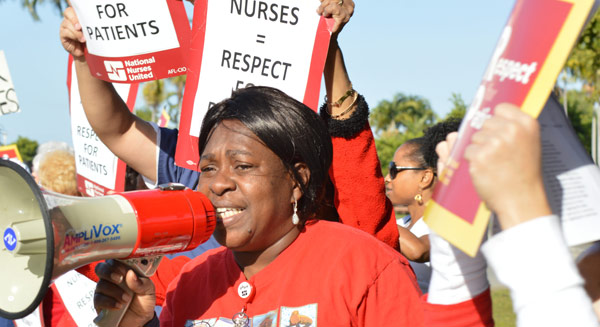 Registered nurses at nine Appalachian Regional Healthcare (ARH) hospitals in Kentucky and West Virginia voted by an overwhelming majority to ratify a contract agreement they say will help recruit and retain the most qualified nurses for communities served by the hospitals and lead to improved patient care.

“At a time when union rights are under attack in Kentucky and West Virgnia, this agreement is especially meaningful for union nurses to be able to advocate for the highest standards of patient care in our communities,” said Larry Kelly, RN, of Harlan ARH Hospital in Harlan, Kentucky.

National Nurses United represents 700 RNs who will be covered by the three-year agreement.

“We worked hard to negotiate this agreement, and I’m proud of nurses for standing strong in the name of quality patient care,” said Anita Jones RN, of Hazard ARH Regional Medical Center, in Hazard, Kentucky.

Contract highlights include a new wage scale to help recruit and retain experienced registered nurses, as well as improved paid time off and call back pay.

The contract runs through May 30, 2020. National Nurses United is the largest union of registered nurses in the country, with more than 150,000 members nationwide.