Amidst National Debate on Future of Healthcare California Alternative Bill 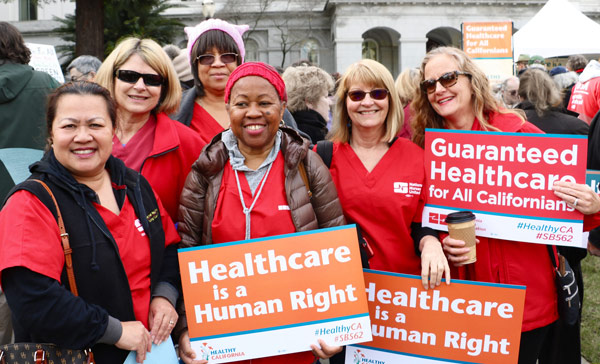 With national debate continuing on the future of healthcare following the defeat of the House “repeal and replacement” bill for the Affordable Care Act, California legislators will soon begin hearings on an alternative approach that would expand coverage to everyone – with no debilitating out of pocket costs that drive people to medical bankruptcy or to forgo needed care.

National Nurses United (NNU), the nation’s largest union and professional association of registered nurses, calls the bill a model that other states could employ.

To schedule an NNU leader to discuss the California model – and the need for real healthcare reform, as in a Medicare for all type system – contact Charles Idelson, 510-273-2246 or cidelson@nationalnursesunited.org

“At a time of critical disarray of our national healthcare system, California can once again lead the nation,” said RoseAnn DeMoro, executive director of CNA and NNU. “This bill will set a standard in America and be a catalyst for the nation.”

Funding through a consolidation of resources currently spent on health coverage, including federal payments for Medicare and Medicaid (Medi-Cal), major savings from elimination of insurance waste, other bureaucracy, and profits with coordinated planning on health resources, and added revenues through a progressive tax mix

California businesses would also see major savings, as workers would no longer be dependent on their employers for health coverage with the rising costs so endemic to a profit-first system. Workers would gain by not facing limits on employer-sponsored plans and the escalating cost shifting for premiums and other health costs that have been steadily increasing in recent years.

CNA/NNU has commissioned a finance cost study that will be available in time for a second legislative hearing, before the Senate Appropriations Committee.

“Even with the ACA, major gaps remained in coverage and costs. The proposed replacement bill and other schemes advanced by the majority in Congress will make the healthcare crisis still experienced by so many far, far worse,” says DeMoro.

“Other industrial countries, with coordinated, rational, public healthcare systems have taken approaches like this – and they have universally better patient care outcomes and lower costs. We can achieve that here, and, if the federal government does not act, we can, as Canada did, state by state,” DeMoro said.

Nurses, other healthcare activists, young people energized by the Bernie Sanders campaign and by the desire for progressive social change, have already been mobilizing across California with town halls, rallies, and other support actions for SB 562. That will now escalate.

“There has been a seismic shift in our political system through grassroots activism; we have an inspired, motivated base that will make its voice heard,” DeMoro said.