Up to 1,000 RNs, Activists to Rally in Sacramento Friday To Press Support for Guaranteed Healthcare 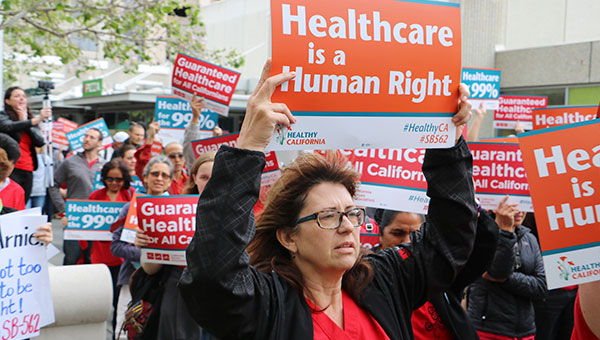 Up to 1,000 registered nurses and grassroots activists from across the state will rally outside the State Capitol late Friday afternoon, followed by a march to the Sacramento Convention Center to press the case for critical legislation to guarantee health coverage for all Californians and an end to out of control co-pays and deductibles.

The rally begins at 5 p.m. on the West Steps of the Capitol, featuring former Ohio State Senator Nina Turner, Sen. Ricardo Lara (tentative) and Sen. Toni Atkins (confirmed) – co-authors of SB 562 which would establish a Medicare for all-type single-payer system in California – and leaders of the California Nurses Association/National Nurses United, lead sponsor of SB 562.

Both the rally and march coincide with the opening of the California Democratic Party convention. CNA and NNU Executive Director RoseAnn DeMoro is scheduled to address the Convention Saturday morning at approximately 11:30 a.m..

Preceding the rally, nurses will also pay visits to a number of state legislators to urge them to support SB 562. The next action on the bill comes Monday with a hearing by the Senate Appropriations Committee.