Bernard Valencia's room in the Jerry L. Pettis Memorial Medical Center in Loma Linda, Calif., illustrates how hospitals across the country could fight a nationwide epidemic. As soon as you enter the room, you can see one of the main strategies: A hook hangs from a metal track that runs across the ceiling.

This isn't some bizarre way of fighting hospital-acquired infections or preventing the staff from getting needle sticks. The contraption is a ceiling hoist designed to lift and move patients with a motor instead of muscle.

As NPR has reported in our investigative series Injured Nurses, nursing employees suffer more debilitating back and other injuries than almost any other occupation — and they get those injuries mainly from doing the everyday tasks of lifting and moving patients.

But the Loma Linda hospital is part of a nationwide health care system that is proving hospitals can dramatically reduce the rate of injuries caused by lifting — if administrators are willing to invest the time and money.

The name of the system might surprise you. It's the VA — the Department of Veterans Affairs.

As I stood next to Valencia's bed one morning, he and his nurse Patience Umoffia showed how the hook dangling from the ceiling is protecting the VA's staff. Umoffia needed to move Valencia from his bed to a wheelchair, and then to a shower. Valencia couldn't help: At 65 years old, his body is so twisted by arthritis that he can barely move his hands or legs.

If this were a typical hospital, Umoffia would cradle her arms around and under Valencia, drag him to the edge of the bed and then lift him like a life-size doll into the wheelchair. Umoffia says she used to move patients that way — just as hospitals and nursing schools have been teaching for more than a century.

"We get so sore," she says. "You barely can even take care of [the patients] the following day."

But Umoffia didn't try to lift Valencia using her own muscle. Instead, Umoffia attached the hook dangling from the ceiling to a fabric sling wrapped around Valencia's body. She pushed the button on a control box, and a gentle whir filled the room. The machine slowly hoisted Valencia in his sling a few feet over the bed, swung him until he was dangling in midair over a waterproof wheelchair, and then gently lowered him.

"I'm comfortable," Valencia said, adding that he felt "like a little baby" hanging from a stork's beak. 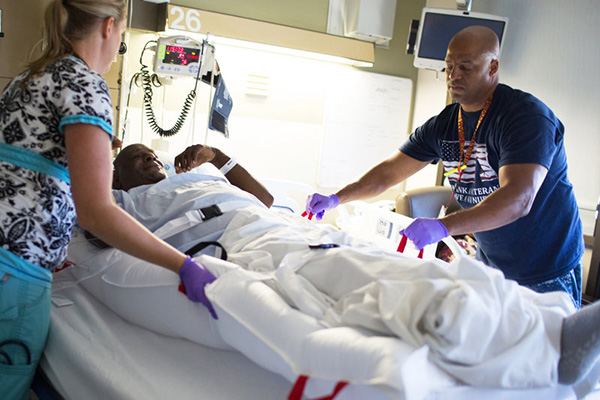 Joleen Beiley and Stephen Gafford lift patient David Eurey using a floating mattress called a HoverMatt, which uses air streams that lift the mattress, making it easy for nursing employees to move a patient from a bed to a gurney.

Tony Hilton, the hospital's safe patient handling and mobility coordinator, watched as Valencia glided through the air. Nobody at this VA, she said, is allowed to move patients the traditional way anymore. "The guideline is, you're not manually moving or handling patients. You're using technology."

The VA's campaign to protect nursing staff started in the late 1990s when one of its hospital directors asked colleagues why so many of the hospital's nursing employees were getting hurt.

"Everybody knew" about the epidemic of back injuries, said Michael Hodgson, then a top researcher at the VA. "Nurses knew about it, physicians knew about it, hospitals' administrators knew about it." VA records showed that more than 2,400 of its nursing staff suffered debilitating injuries every year from lifting patients.

The VA's own studies estimated that its hospitals were spending at least $22 million every year treating back and other injuries among nursing staff. And that figure "likely represents a substantial underestimate," a VA report cautioned, since half of all injuries that interfered with employees' ability to do their work were not reported.

So VA researchers started studying exactly how nursing employees perform their jobs — partly by just following them around and observing. Scientists at The Ohio State University's Spine Research Institute did their own studies, too. They wired up nursing staff with sophisticated sensors and discovered that when nursing employees move and lift patients using the traditional techniques they've been taught, the magnitude of forces on their backs is greater than researchers had seen on factory assembly lines.

VA officials responded in 2008 by announcing a sweeping program: The agency would transform all of its 153 hospitals to prevent nursing staff from getting hurt.

Since it began, the VA has spent more than $200 million on what it calls "the safe patient handling program."

The most visible signs of the program at Loma Linda are the ceiling lifts, like the one that hoisted Valencia. The VA is by no means the only system that uses them — administrators at some private hospitals across the country told me that they have lifts in a portion of their rooms, such as in the intensive care unit, and perhaps some rooms reserved for patients getting surgery. 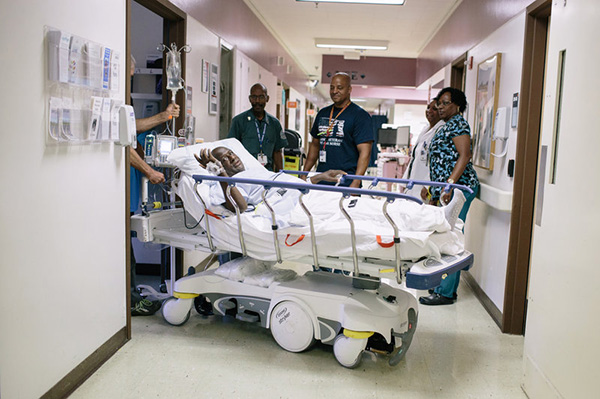 Eurey is moved via a self-driving gurney that does not need any force by the person driving it at the VA hospital in Loma Linda.

But researchers told me they've seldom seen a hospital embrace lifts as dramatically as Loma Linda and other VA medical centers have. Staff engineers at Loma Linda ripped up parts of the ceilings and installed lifts in all 207 patient rooms, at a cost of roughly $2 million. They also installed lifts just about everywhere else patients need to go, according to Hilton, including imaging departments, clinics and the dialysis center — even the morgue.

And the hospital is trying to prevent injuries with more than lifts. For instance, workers move some patients on HoverMatt floating mattresses: Just connect the mattress with a pump, and it shoots air streams through thousands of tiny holes under it, so the mattress almost levitates. This way, workers don't have to lift a patient from a bed onto a gurney. They can float the mattress over using just one hand — although HoverMatt recommends using two.

Hilton also persuaded hospital administrators to replace their traditional gurneys, which nursing employees have to push, with power gurneys that employees drive at the touch of a button. Again, the VA is not unique in using equipment like that — it's unusual because every corner of the hospital has it.

Still, the VA has discovered that all the equipment in the world does not prevent injuries on its own. When Hilton came to the Loma Linda VA six years ago, for instance, many of the rooms were already outfitted with lifts, but most nursing employees ignored them. "It was actually a laughing matter in the beginning," Hilton said. The staff said, "'Oh, no, lifts? They don't work. Takes too much time.' They were used to their old ways. They wouldn't use it. We have been taught for years that we manually handle patients," she said. "So to undo that in your brain is a cultural change. They have to buy into it." 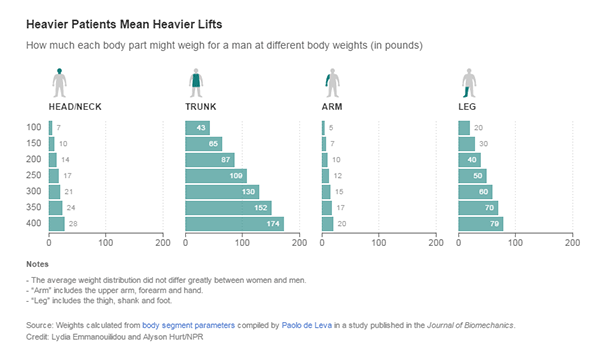 Hilton realized that to make that cultural change, they needed to train the nursing employees over and over again. At the Loma Linda VA, the training starts practically the first day employees come to work. One morning, I watched Hilton walk to the podium in the hospital's auditorium and gaze out over a new batch of nurses, nursing assistants and other staff. "So," Hilton asked them, "anybody here who knows what in the world is safe patient handling all about?"

The audience was silent.

"For a 200-pound man, how much do you think that leg weighs?" Hilton continued, and the new employees started to murmur. "Anybody want to guess? Can go up to 45 pounds," she said. Hilton told the new employees they would not be allowed to move patients anymore without using lifts or other equipment.

Officials at private hospitals told me they teach employees to move patients safely, too — typically by sending them to an hourlong class, perhaps once per year. But Hilton says training that infrequently is not likely to work. At the Loma Linda hospital, they're constantly training employees how to use lift equipment, partly with "peer" trainers. There's at least one employee on every unit, every shift, 24 hours a day, assigned to coach colleagues on how to use safe lifting technology. Outside trainers also conduct workshops frequently. One afternoon, we dropped by a room where nurses from the intensive care unit were learning how to use a brand-new machine that takes over the job of turning patients onto their stomachs. 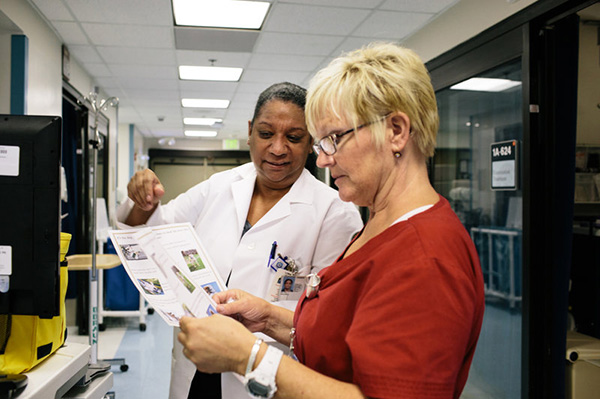 One of the trainees at the session, Tiffany Gratton, said she worked at roughly 20 private hospitals as a substitute nurse before she came to the VA a few years ago. None had a program like this. "In my 12 years of experience I've not experienced this type of system for safe patient handling," Gratton said. "They never stressed the injuries that could be sustained."

Researchers in the VA have discovered that there's one more ingredient that hospitals need if they're going to prevent injuries as much as possible: what they call a safety "champion." They need a full-time coordinator like Hilton to remind the staff every day — including managers — that it's a priority in the hospital to protect employees' backs. Hospital administrators told me that without Hilton's constant lobbying, armed with research to bolster her arguments, they wouldn't have invested so much money in safe patient handling. 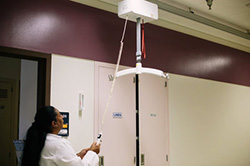 Tony Hilton, the safe patient handling and mobility coordinator at the VA hospital in Loma Linda, demonstrates one of the hospital's lifts.

Rank-and-file nursing employees said that without Hilton's prodding, they wouldn't remember to use the equipment. Hilton spends a typical day speed-walking from one unit to the next, making sure the staff is staying safe. "Any issues here we need to take care of with safe patient handling today?" she asks employees in the emergency room as she breezes through the department. "Do you have what you need to do your job?" The employees call out to her, "Yes."

"Remember, I'm your guardian angel," Hilton told them. "You know I've got your back."

Federal researchers have been studying the results. They show that VA hospitals across the country have reduced nursing injuries from moving patients by an average of 40 percent since the program started. Hilton says the reduction at the Loma Linda hospital has been closer to 30 percent — but the injuries that employees do suffer are less serious than they used to be. Loma Linda spent almost $1 million during a recent four-year period just to hire replacements for employees who got hurt so badly they had to go home, Hilton said.

She said nobody got hurt badly enough to miss work.