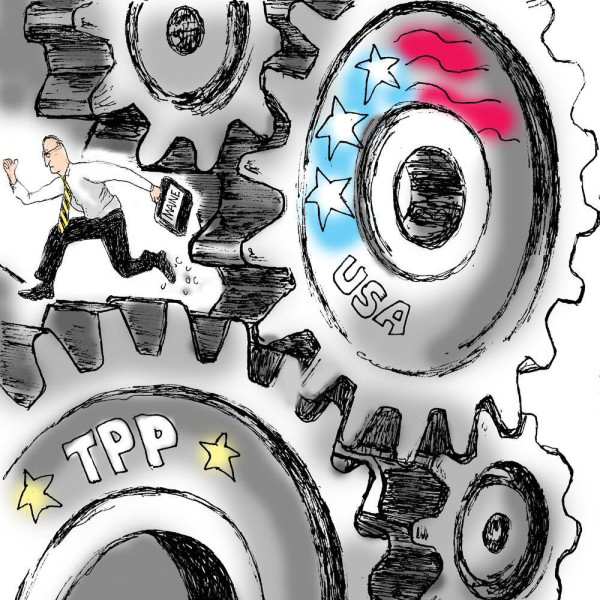 Nurses are patient advocates — and by extension advocates for our patients’ families and our communities — and today we are sounding an alert on theTrans-Pacific Partnership, an international agreement that puts the public health of Maine, and the nation, at risk.

Maine nurses urge Congress to reject this fatally flawed agreement and strongly encourage the Legislature to speak out in the public interest and against the Trans-Pacific Partnership. While there are many good reasons to reject this trade pact, Maine’s registered nurses are particularly appalled by this agreement’s threat to public health and safety.

Despite the promises and reassurances offered by the Obama administration over the past few months, including during the president’s State of the Union address, the final text of the Trans-Pacific Partnership is even worse than prior reports had predicted.

Monopoly pricing protections for giant pharmaceutical firms in the Trans-Pacific Partnership could be a death sentence for countless patients in need of affordable medications around the world. Pharmaceutical corporations would be given years more of monopoly pricing practices on their patents for high-priced, brand-name drugs to block distribution of competitive, cheaper, lifesaving generic medications. That is especially critical for people suffering from cancer, HIV/AIDS, hepatitis, and other illnesses in developing countries as well as in the United States.

The Trans-Pacific Partnership would allow drug companies the legal authority to challenge and overturn national laws and regulations that permit governments to negotiate lower drug prices through bulk purchases, which cuts costs for everyone. That would hurt the people in the countries signatory to the agreement that already do drug bulk purchasing, and it would hurt the ability of the U.S. government to finally do it here at home.

These gifts to the billionaire drug companies are a cruel and disgraceful threat to the lives of Mainers and people across the country. The pretext of giving the pharmaceutical corporations expanded monopoly control to “repay” them for research and development costs is particularly hollow considering that a substantial percentage of those costs are paid for with public funds with drugs developed at public universities.

Nurses are appalled at the provisions regarding the so-called Investor State Dispute Settlement process that allows global corporations to sue to overturn laws and regulations, including public safety and environmental protections. As has already occurred with prior trade deals, the Investor State Dispute Settlement process allows corporations to challenge domestic laws through extrajudicial tribunals staffed by corporate attorneys who can demand taxpayers reimburse corporations for lost “expected” profits. In prior trade pacts, this provision has forced some countries to drop health, safety, or environmental rules rather than face bankruptcy from billion dollar rulings.

This agreement is an all out assault on not only health and safety but also on the democratic rights of the American people to pass public protections. It’s another reminder that the pharmaceutical industry and other corporate lobbyists, who wrote many of these provisions, continue to dominate and corrupt our political system.

We can understand why these huge multinational corporations want such deals and why they in fact are helping write them: bigger and bigger profits for them. But Congress should reject this outright because it is clearly not in the public interest.

In addition, the Trans-Pacific Partnership would undermine environmental and food safety standards. Maine nurses also share the concerns of workers across the country that the Pacific trade pact will lead to more job loss, lower wages and weakened labor protections in the U.S.

Maine’s members of Congress must now step up and join this fight to defeat the Trans-Pacific Partnership. Nurses and working people will not be silent in working to stop and overturn this dangerous agreement.

Cokie Giles is a Registered Nurse, the president of the Maine State Nurses Association, and a vice president of National Nurses United, the largest organization of registered nurses in the United States.