In Flint, Mich., thereâ€™s so much lead in childrenâ€™s blood that a state of emergency is declared 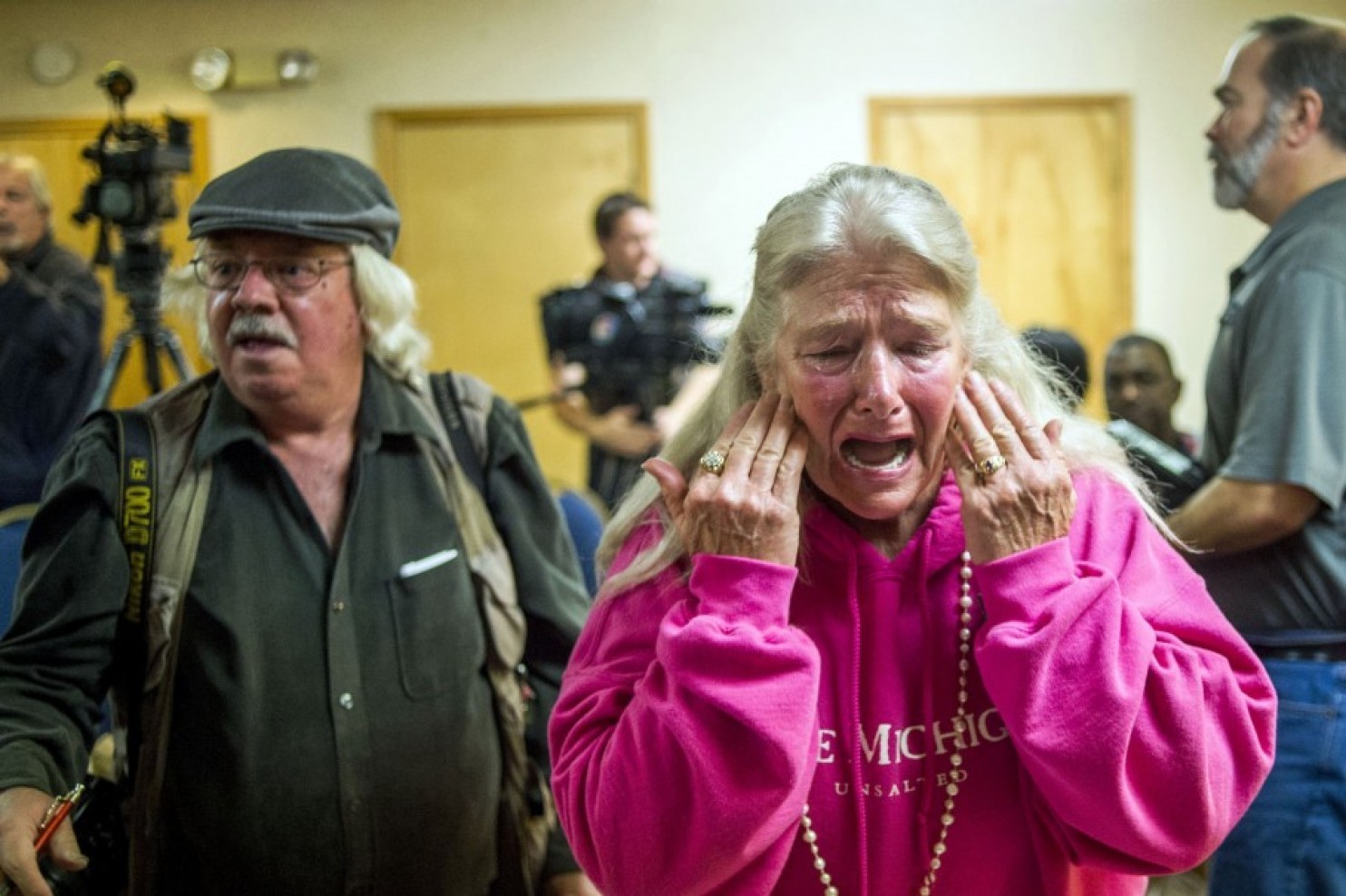 Flint, Mich., resident Gladyes Williamson cries out through her tears, overwhelmed with frustration over the water drawn from the Flint River. (Jake May /Flint Journal-MLive.com via AP)

For months, worried parents in Flint, Mich., arrived at their pediatricians’ offices in droves. Holding a toddler by the hand or an infant in their arms, they all have the same question: Are their children being poisoned?

To find out, all it takes is a prick of the finger, a small letting of blood. If tests come back positive, the potentially severe consequences are far more difficult to discern.

That’s how lead works. It leaves its mark quietly, with a virtually invisible trail. But years later, when a child shows signs of a learning disability or behavioral issues, lead’s prior presence in the bloodstream suddenly becomes inescapable.

According to the World Health Organization, “lead affects children’s brain development resulting in reduced intelligence quotient (IQ), behavioral changes such as shortening of attention span and increased antisocial behavior, and reduced educational attainment. Lead exposure also causes anemia, hypertension, renal impairment, immunotoxicity and toxicity to the reproductive organs. The neurological and behavioral effects of lead are believed to be irreversible.”

The Hurley Medical Center, in Flint, released a study in September that confirmed what many Flint parents had feared for over a year: The proportion of infants and children with above-average levels of lead in their blood has nearly doubled since the city switched from the Detroit water system to using the Flint River as its water source, in 2014.

“The City of Flint has experienced a Manmade disaster,” Weaver said in a declaratory statement.

The mayor — elected after her predecessor, Dayne Walling, experienced fallout from his administration’s handling of the water problems — said in the statement that she was seeking support from the federal government to deal with the “irreversible” effects of lead exposure on the city’s children. Weaver thinks that these health consequences will lead to a greater need for special education and mental health services, as well as developments in the juvenile justice system.

“Do we meet the criteria [for a disaster area]? I don’t know,” she told Michigan Live. But Weaver doesn’t think the city can receive the help it needs without alerting federal officials to the urgency of the matter.

To those living in Flint, the announcement may feel as if it has been a long time coming.

Almost immediately after the city started drawing from the Flint River in April 2014, residents began complaining about the water, which they said was cloudy in appearance and emitted a foul odor.

Since then, complications from the water coming from the Flint River have only piled up. Although city and state officials initially denied that the water was unsafe, the state issued a notice informing Flint residents that their water contained unlawful levels of trihalomethanes, a chlorine byproduct linked to cancer and other diseases. 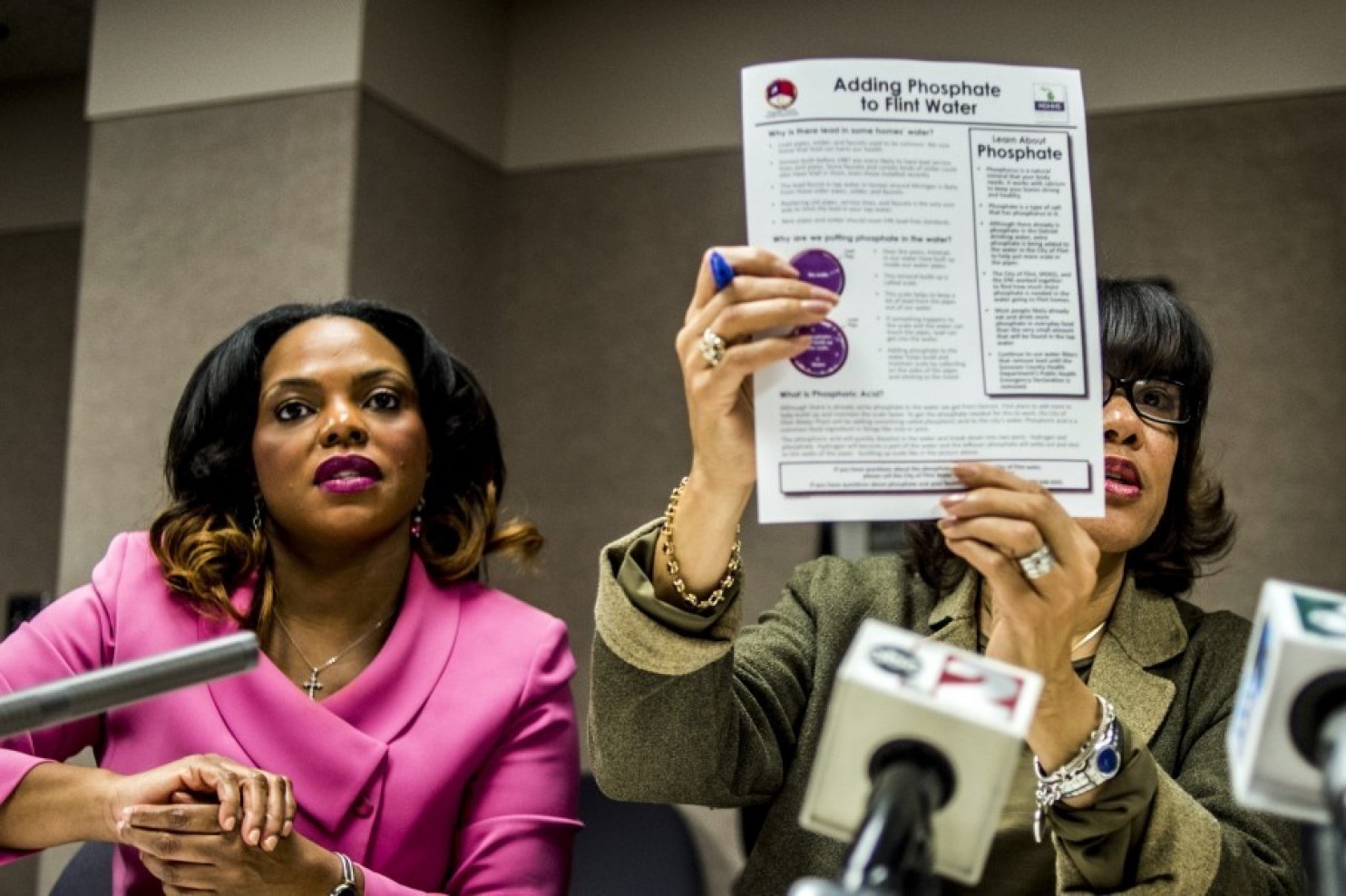 Protesters marched to City Hall in the fierce Michigan cold, calling for officials to reconnect Flint’s water to the Detroit system. The use of the Flint River was supposed to be temporary, set to end in 2016 after a pipeline to Lake Huron’s Karegnondi Water Authority is finished.

Through continued demonstrations by Flint residents and mounting scientific evidence of the water’s toxins, city and state officials offered various solutions — from asking residents to boil their water to providing them with water filters — in an attempt to work around the need to reconnect to the Detroit system.

That call was finally made by Snyder (R) on Oct. 8. He announced that he had a plan for coming up with the $12 million to switch Flint back to the Detroit system. On Oct. 16, water started flowing again from Detroit to Flint.

David Murray, press secretary for Michigan governor Rick Snyder’s office, told The Washington Post that the state has been working on improving the water quality in Flint and other cities for the past year. It has also offered more than $10 million in financial assistance to pay for a temporary switch into the Detroit system while the connection to Lake Huron is being prepared.

“Flint residents need to have access to safe, clean water,” Murray wrote in an email to The Post. “Gov. Snyder and the administration have been working closely with the city to focus on health issues affecting children and other city residents, and address water infrastructure challenges.”

He added that while Flint’s water is currently safe to drink, “some families with lead plumbing in their homes or service connections could experience higher levels of lead in the water that comes out of their faucets.” An action plan created by Snyder in October includes free water testing, free water filters and the accelerating of corrosion controls in the drinking water system, according to Murray.

For the parents of children who may have been affected, such actions were accompanied by the sense that they had come too late.

These parents and other Flint residents filed a class-action federal lawsuit against Snyder, the state, the city and 13 other public officials in November for the damages they have suffered as a result of the lead-tainted water. The suit, which claims to represent “tens of thousands of residents,” alleges that the city and state officials “deliberately deprived” them of their 14th Amendment rights by replacing formerly safe drinking water with a cheaper alternative that was known to be highly toxic. 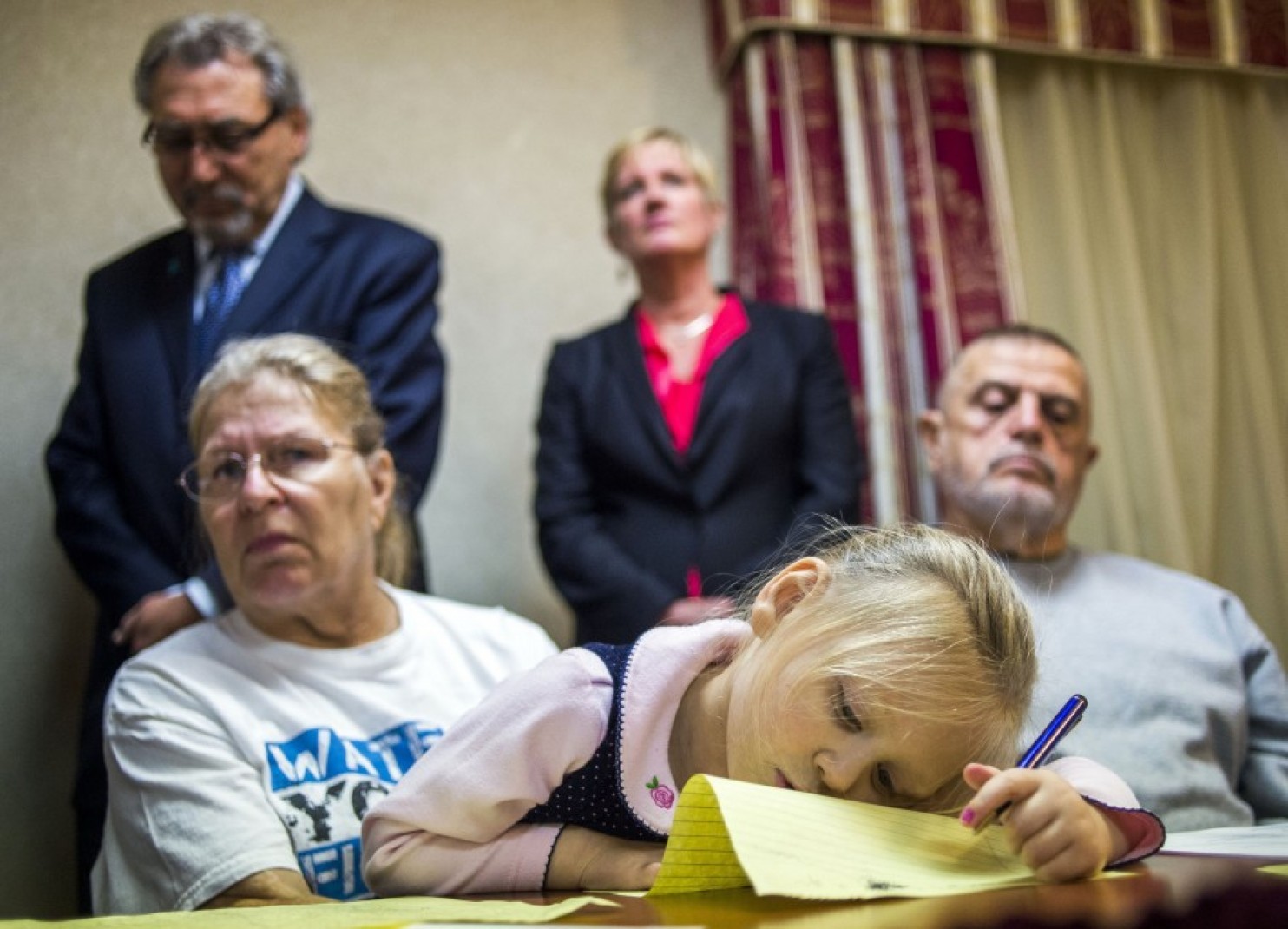 Lyla McCallun, 4, formerly of Flint, draws on a sheet of paper while sitting on the lap of her grandmother, Flint resident Jacqueline Pemberton, one of six others listed as plaintiffs in the lawsuit. (Jake May /Flint Journal-MLive.com via AP)

Lyla McCallun, 4, formerly of Flint, draws on a sheet of paper while sitting on the lap of her grandmother, Flint resident Jacqueline Pemberton, one of six others listed as plaintiffs in the lawsuit. (Jake May /Flint Journal-MLive.com via AP)

“For more than 18 months, state and local government officials ignored irrefutable evidence that the water pumped from the Flint River exposed [residents] to extreme toxicity,” the complaint reads. “The deliberately false denials about the safety of the Flint River water was as deadly as it was arrogant.”

Calling officials’ conduct “so egregious and so outrageous that it shocks the conscience,” the complaint cites the specific experiences of a few plaintiffs and their families, all of whom allege they have been challenged by similar health ailments since high levels of lead and copper entered their bloodstreams.

These conditions include skin lesions, hair loss, chemical-induced hypertension, vision loss and depression. Of the four families described in the complaint, two had ceased to drink Flint water after a certain point — and used it only for washing and cooking — but still said they were exposed to many of the same ill effects.

Snyder’s press secretary, Murray, wrote in an email to The Post that the administration disagrees with points in the suit, but declined to discuss details of pending litigation.

As the Detroit Free Press reported in October, avoiding Flint water became a way of life for the city’s residents.

Those who could afford it opted for bottled water, buying it by the gallons. Those who couldn’t spare the money drank it straight from the tap all the same, knowing that they would be paying for it later. When it came to bathing, some slowly filled bathtubs with pots of boiled water for their children.

LeeAnn Walters, a Flint resident and mother of 4-year-old twins, took every precaution after blood tests revealed that the level of lead in one of her sons had soared after the switch to Flint River.

“I was hysterical,” Walters told the Free Press. “I cried when they gave me my first lead report.”

She had feared lead was the problem when her whole family developed rashes and her son stopped gaining weight.

Now, Walters said, when her children experience problems as they grow up, she will always wonder whether things would have been different — if their lives would have been better — if it weren’t for the water.

*This post has been updated with a response from the office of Gov. Rick Snyder.