Another deadly consequence of climate change: The spread of dangerous diseases

By Brian Deese and Ronald A. Klain, The Washington Post 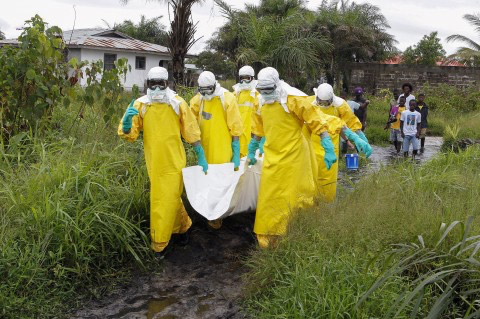 Liberian nurses carry the dead body of someone suspected of dying from the Ebola virus. (Ahmed Jallanzo/European Pressphoto Agency)

Brian Deese, a senior fellow at the Mossavar-Rahmani Center for Business and Government at Harvard’s Kennedy School, served as a senior adviser to President Barack Obama overseeing climate change and energy policy. Ronald A. Klain, a Post contributing columnist, was White House Ebola response coordinator from 2014 to 2015 and a senior adviser to Hillary Clinton’s 2016 campaign.

With President Trump’s decision on U.S. participation in the Paris climate accords expected in the next few days, there has been widespread discussion of the many consequences that climate change will have for us and our children, including extreme weather events, displacement of people, submergence of lands and devastation to our oceans. But one of the most potentially deadly effects has been far less discussed: an increase in the spread of dangerous epidemics and the risk of a global pandemic.

As the Earth’s climate alters, we are seeing changes in where and how humans live; these changes increase the risk that deadly diseases will emerge and spread more rapidly. While the interactions between climate change and disease are hard to predict with certainty, the scientific linkages are unmistakable. If we fail to integrate planning for the impact of climate change with planning for the prevention and management of pandemic disease, the consequences will be deadly.

The link between climate and disease is most often identified through the spread of disease vectors such as mosquitoes. As areas warm, habitats for insects — mosquitoes and deer ticks, for example — expand, exposing new populations to new disease threats. As Maryn McKenna recently explained in the New York Times Magazine, the approximately one degree Celsius increase in average temperatures the planet has experienced is “changing the numbers and distribution of the insect intermediaries that carry diseases to people.” Most immediately, we could see a larger number of people at risk in the United States from Zika this summer as the Aedes aegypti mosquito moves farther north, complicating the already challenging efforts to constrain the disease.

But a second, and less appreciated, interaction between climate change and epidemics occurs when humans and animals are forced to compete for dwindling habitat and resources. The scenario behind Ebola’s rise and global threat in 2014 illustrates this point. Climate change destroys habitats and stresses animal populations such as the bats of West Africa, forcing them to hunt for food nearer to humans. Humans, likewise pressed by climate impacts, encroach more closely on animal habitats. While we cannot know that climate change was the cause of the specific interaction between bats and humans that is believed to have launched the Ebola outbreak in Guinea, we will see more of these interactions in the future, and more epidemics as a result.

Ebola demonstrates that even localized dislocation of people and animals can create global risk. Climate change is a threat multiplier for much broader dislocation — accelerating the complex factors that drive people from their homes. While in some cases climate-affected dislocation will be “planned” — as with the climate refugees in Louisiana or on remote Pacific islands such as Kiribati — more often it will occur in large, unplanned migrations that amplify regional instability and crisis. This dynamic can also drive migrations from rural into urban areas, as occurred in Syria, where the 2006-2010 drought killed off 80 percent of the country’s livestock and helped drive more than 1.5 million people into stressed urban centers. The U.S. intelligence community’s bottom-line assessment of the risk is plain: “Over 20 years, the net effects of climate change on the patterns of global human movement and statelessness could be dramatic, perhaps unprecedented.”

We saw Ebola breach the rural-to-urban interface in West Africa; the outcome and extent of the current outbreak of Ebola in Congo remains to be seen. As climate change accelerates the movement of people, the risks of disease formation and transmission will multiply.

While these risks are acute, they can be addressed. The use of data to build models of future disease incidence based on climatic trends can create an early-warning system. In recent years, the State Department stepped up its work with developing countries to use high-quality data to project climate risks, including from the spread of disease. International efforts such as the IRI/WHO early-warning system for climate-related diseases also provide models. To be maximally effective, these measures should be integrated into the whole-of-government planning for pandemic prevention and response. This work requires resources and global coordination, but it can deliver results.

Unfortunately, the Trump administration is engaged in a form of double denial — slashing funding for the science to fight disease and climate change. Trump’s newly released budget would set back medical research through a massive, 19 percent ($5.8 billion) cut to the National Institutes of Health and would undermine federal capacity to work with communities on strategies to keep them safe through a 17 percent ($1.3 billion) cut to the Centers for Disease Control and Prevention. At the same time, it would effectively eliminate our government’s capacity to collect and analyze data on climate change and end all of the State Department’s efforts to get other countries to prepare for threats before they spill over their borders to ours.

The administration’s response seems to be that, by retreating, we can simply ignore these global challenges. How else can one explain a budget strategy that funds the construction of a border wall while cutting roughly $7 billion from the NIH and CDC?

Both climate change and disease are intrinsically global threats. They cannot be wished away by ignoring science or building walls. There is no strategy to close our borders or shut our doors that can keep temperatures from rising, disease vectors from spreading and humans from interacting in ways that create new vulnerabilities.

The only way to keep our country safe is to better understand the science behind climate change and disease, better prepare our communities and public-health officials to respond, and better arm other countries to anticipate the spread of these threats before they spill over national borders. Denying this reality will have deadly consequences.