Registered nurses from across the country went to Washington DC last week to urge Congress to take action to fix the nation’s broken health care system by enacting Medicare for All. 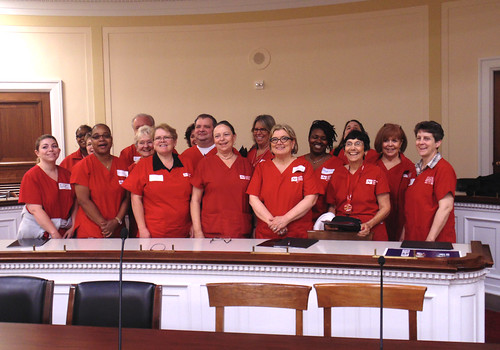 While our nation’s health care system has incredibly capable nurses and other health professionals, and boasts a variety of other advantages like the highest spending per person in the world, we don’t get the patient outcomes we should.  Far too many people go without health care when they need it.  Our nation ranks behind 19 industrialized countries in preventable deaths among those under age 75.

Too often patients’ critical needs seem to take a back seat to corporations’ efforts to build their bottom line.  42,000 Americans will die this year for lack of health care, or about 1 per 1,000 uninsured people.  Nurses know all too well that patients face financial barriers to care – even with insurance.  Over one-third of people report going without care or not filling a prescription due to cost, which is extremely dangerous and can lead to unnecessary suffering, dramatically increased costs of care, and even death.  Paul Holland, a nurse working at St. Louis University Hospital told staff for Senator Claire McCaskill (D-MO) about one patient who was forced to put off necessary treatment until she qualified for Medicare years later, which may well have led to her untimely death. 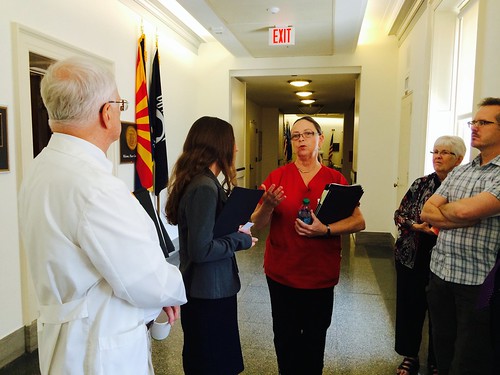 NNU Co-President Deborah Burger, RN, and other health care advocates made the case for Medicare for All to staff for Rep. Raul Grijalva (D-AZ).

These are among the reasons that National Nurses United advocates for Medicare for All.  Nurses envision a more equitable world, where patients get the care they need without going broke, the majority of all bankruptcies in this country are due to medical bills.  As part of the Nurses Campaign to Heal America, RNs went to Capitol Hill in Washington DC last Thursday to tell members of Congress that our patients need a system that puts them first.

Working with health care and consumer advocates, we visited dozens of Senators and Representatives of both political parties to tell them that the nation needs a change.   Vikki Averegan and Sylvia Nell Searfross of Texas had a great conversation in the office of Rep. Beto O’Rourke (D-TX) that produced concrete suggestions from the congressman’s staff to help make that change possible – they suggested we continue our activism and speak up for better health care at town halls and by writing letters.

Under a single payer health care system, everyone can get the care they need while the nation saves nearly $600 billion per year by slashing overhead and negotiating lower drug costs with providers and pharmaceutical companies.  Beyond financial savings, streamlining the payment system would free up substantial nurse time and other health care professional time that could be spent caring for patients.

Two thirds of Americans support a national health program that covers everyone, and nurses were proud to speak up for this important step toward a health care system that puts the needs of patients first. 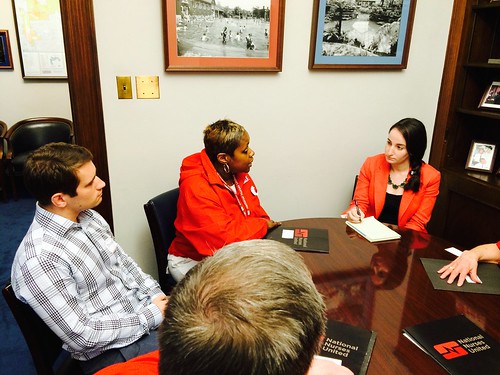 RN Kim Anderson of Chicago and a team of Illinois nurses urged staff for Rep. Mike Quigley (D-IL) to support Medicare for All.

In addition to talking to members of Congress, registered nurses and other advocates for Medicare for All joined Sen. Bernie Sanders (I-VT) for a conversation about single-payer, improved Medicare for All at a summit on Wednesday.  We discussed how our health care system needs more than tinkering, that it needs a complete overhaul. This would enhance the clinical judgment of RNs and doctors and other caregivers in order to serve patients effectively. As patient advocates we can create a health care system offering universal access.  We discussed how nurses and others reject a system where access is based on ability to pay, so are continuing our efforts to ensure that everyone gets the care they need.

We can only do this together.

Nationwide
Medicare For All
Nurses Campaign to Heal America