Nurses Stand in Solidarity with Congressional Women of Color 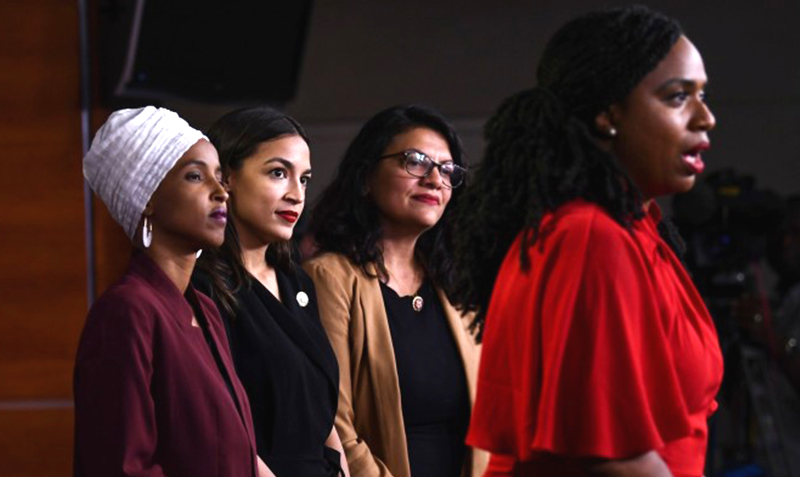 As a union that represents registered nurses who see the consequences of threats to the health and safety of our patients, National Nurses United (NNU) is alarmed and appalled at the rising tone of attacks on four inspiring women of color emanating from the White House and its supporters.

NNU stands with four new Congressional leaders, Representatives Alexandria Ocasio-Cortez, Ilhan Omar, Rashida Tlaib and Ayanna Pressley, and we are encouraged and grateful for all those across our nation who are also speaking out, and standing with them, as well.

As a nation, we should all be aware of how women of color have long been targets for incendiary harassment and violence in our country, from the indigenous women of this continent, to the women subject to double oppression based on their race and gender during slavery, to the many women who have been leading advocates of reform in the decades that followed.

During the Civil Rights era, bold leaders like Rosa Parks and Fannie Lou Hamer endured repeated threats and attacks, while they courageously advocated for freedom and justice. They were not silenced; both remained dedicated activists throughout their lives.

Today, we are impressed with the strength and resilience of the women of “the Squad” as they are known, in the face of outrageous attacks on their democratic rights, as well as efforts to stir up hatred and threats against them and their families.

At a time when we have seen the rise of white supremacist violence, there should be no illusion about the implication of calls from the highest office in our land to “send them back,” odiously voiced through social media and mass rallies, and repeated by its allies and surrogates.

Health and safety is a prime directive of our union and of nurses, who see the impact of violence and pain inflicted on our patients, while also facing a growing epidemic of workplace violence directed at nurses and other health care workers. We have made that a priority for our work in the health care setting, and have no less of a responsibility to speak out on it nationally as well.

Further, we are proud of Reps. Ocasio-Cortez, Omar, Tlaib and Pressley for their outspoken advocacy. We could not be more appreciative of their activism and voice on behalf of all of us.

All four women are strong supporters of bills we champion that protect patients, nurses, and union workers.

They have cosponsored the Medicare for All Act of 2019, to make healthcare a human right for our patients. They have signed on to legislation dedicated to protecting nurses and other health care and social service workers from an epidemic of workplace violence. They have supported a critical bill protecting the right of nurses to organize and form a union.

Representative Ocasio-Cortez recently joined our VA nurses in the Bronx to fight attempts to strip funding from and privatize the VA health care system that benefits our veteran patients. Representatives Tlaib, Omar and Pressley have also joined nurses at events, and stood by our side as we fight for greater public health and safety.

Their voices are the voices of the people and communities they represent, of young people, of brown and black people, and of women — all of whom deserve to help define America’s future. And they have shown up for nurses and our patients, again and again.

To “the Squad”: National Nurses United is grateful for your work and your inspiring leadership, and we are proud to stand with you.