Nurses say: Join Us on Sept. 1 on Main Street, Donâ€™t Return to DC 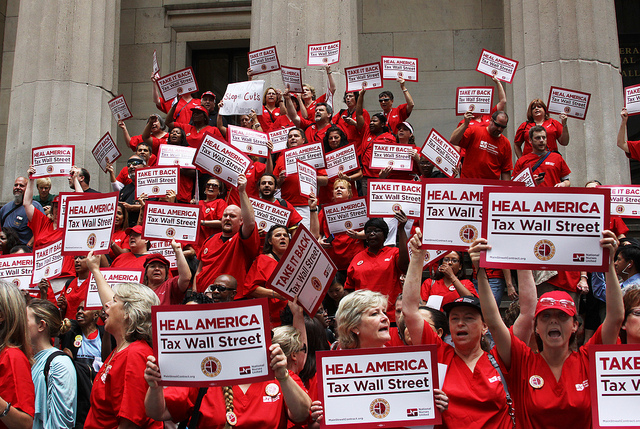 Main Street is where the damage has been done and is being felt most deeply; DC is where deals are cut to protect Wall Street with breath-taking regularity.  This is not a time when political posturing for some distant election cycle by those largely insulated from the harsh financial realties they helped create ought to take precedence over the real-time, real-life needs of millions.

Lives depend on it; jobs depend on it; communities depend on it.  170,000 Registered Nurse members of National Nurses United throughout America have come together to re-build Main Street. We need you on our side.  So, on Thursday, September 1, the nurses of National Nurses United will gather in more than 60 communities from Maine to Texas, and Massachusetts, Pennsylvania, Minnesota, Michigan, Florida, Illinois, California and beyond to call on the nation’s elected officials to chose to protect and repair Main Street and stop cow-towing to Wall Street.

We’ll be asking something very specific of our elected officials, and that is not about where or whether or not they take an August or Labor Day vacation.  We want them to pledge their support for those who damaged Main Street so badly to pay to repair it.  Main Street is taxed enough, let’s establish a Wall Street Transaction Tax — it could raise $350 billion to rebuild our country – an amount sufficient enough to make a real difference on Main Street, where the emergency is felt most directly.

The Wall Street Transaction Tax is a sales tax on the stocks, bonds, debt and other trades carried out by the financial industry. That’s the place to start. Imagine a country in which workers have jobs at living wages to reinvest in America, where there is equal access to quality public education and guaranteed healthcare, a secure retirement, good housing, protection from hunger and a safe environment.

That’s the America our nurses not only imagine but, insist must be rebuilt.

Large banks and Wall Street firms wrecked our economy. They wiped out pensions and portfolios. Because of their greed, they threw us into a recession, cost us millions of jobs, and squandered American productivity. Yet nobody has paid the price for this wrongdoing. No one has gone to jail. In fact, they remain some of the most profitable businesses in America, doling out hundreds of millions of dollars in executive bonuses. And they pay some of the lowest tax rates in the country.

The nurses say it’s not time to call anyone back to Washington, D.C., unless and until those elected officials have properly surveyed the damage they wrought on Main Street and have made the commitment to fix that damage.  Even from their various vacation venues, few of the nation’s lawmakers are more than a short distance away from one of the nurses’ September 1 Main Street events.

Find an event near you, ask your elected officials to attend and insist that they pledge to be a part of healing Main Street, and then stay tuned as the nurses keep up the kind of pressure needed to hold those who pledge to keep their promises and those who do not to stand to account.  It’s time for a little reality check – and that won’t happen on Pennsylvania Avenue or on Capital Hill.   It will happen back home on our Main Streets of America.