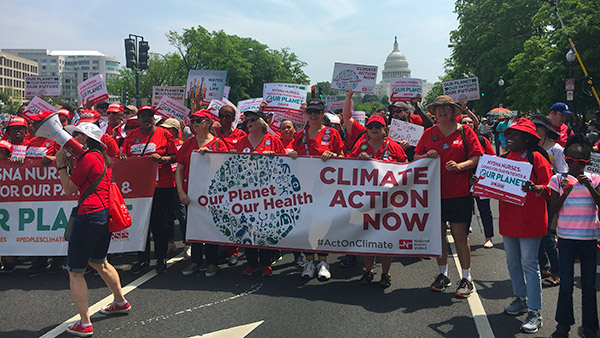 A toxic environment leads to illnesses that become a nurse’s job to heal. That’s why 70 National Nurses United (NNU) RNs stood together with 300,000 other marchers to demand environmental justice at the People’s Climate March in Washington, D.C., on Saturday. 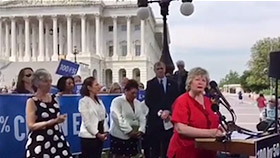 “As patient advocates, nurses know that it’s our duty to follow the path of a public health crisis out into the world, where it begins, and to fight for environmental justice to prevent our patients from becoming sick or injured in the first place,” said Ross.

Nurses across the country also rose up at sister People’s Climate Marches, from Miami—where RNs marched alongside Haitian community leaders—to Chicago, where nurses braved wind and rain to join a crowd of 5,000.

“Climate change is the most critical healthcare issue of our time. We owe it to our patients, our communities, our country, and our planet to fight back with all our united energy against the forces that would ravage our home and threaten all of earth's inhabitants with extinction. This is the fight of our lives and nurses will not back down!” said Judy Lerma, RN, who marched in San Antonio, Texas.

“With more than 400 parts per million CO2 in the atmosphere, fracking, oil pipelines, mountain top removal for coal—we are poisoning the environment that supports life and health,” said Chicago RN Maria Bell, who marched with her fellow nurses and Reclaim Chicago. “We have to quickly move to 100 percent publicly controlled renewable energy before it's too late!"

In cities throughout California, RN climate marchers also educated crowds on the importance of fighting for SB 562, a bill which would guarantee healthcare for all Californians—explaining that those who experience environmental illnesses without comprehensive, guaranteed healthcare to heal from those illnesses face a double injustice.

“I take care of women, infants and children. We see a lot of childhood asthma, and close by, over in Richmond, they’re dealing with the refinery and the toxins that spread over their community,” said Barb Ryan, RN, of Marin, Calif, who spoke at the Oakland march. “So I’m here to spread the word that we need great healthcare, and we also need our planet to survive.”

The People’s Climate march is just the latest example of NNU registered nurse members across the country standing up loud and proud for environmental justice. NNU nurses have for years spoken out against the Keystone XL Pipeline. NNU’s Registered Nurse Response Network (RNRN) also deployed to the Standing Rock Sioux Reservation in North Dakota three times in 2016 to stand in solidarity against the Dakota Access Pipeline (DAPL) and to help provide first aid for the water protectors.

Additionally, NNU RNs have taken part in actions against a tar sands export terminal in South Portland, Maine (where they played a key role in securing the Clear Skies Ordinance to halt the project), Florida’s Sabal Trail pipeline, the Trans Pecos and Montana Vista pipelines in Texas—as well as doing anti-fracking work in various states, speaking out against the dangers of oil “bomb” trains and uncovered coal trains to patients, advocating for clean water from Flint, Mich. to Standing Rock, and regularly attending environmental justice protests, rallies and marches.

“At this point, I believe that if you are not willing to be part of the solution then you are simply part of the problem,” said RN Lara Norkus-Crampton, who marched in Minneapolis, Minn. “We all have to do our part. I am proud of the nurses trying to work for the health of our planet and the health of all who rely on it.”

Climate Marches Across the Country