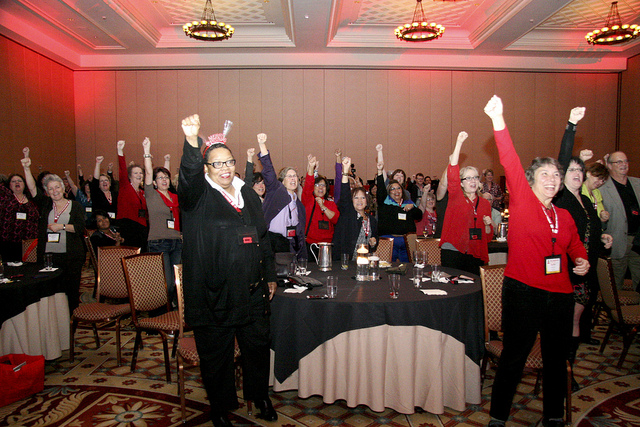 RNs celebrate the third anniversary of NNU at Vegas Convention 2012.

Every year, National Nurses United’s top RN leaders convene to celebrate the accomplishments of the past year as well as to strategize about how to build the national nurses movement and push back against the incessant forces of corporate healthcare in the year ahead. This year, as NNU marked its third birthday, nurses devoted their three days to discussion of the corporate hospital industry’s attack against nursing and nursing standards, and to how they can further their advocacy for patients and for society at large through the unionization of America’s nurses and campaigns such as the Robin Hood Tax. The Robin Hood Tax, which currently is proposed in Congress by Rep. Keith Ellison as HR 6411, would be a small tax on Wall Street trades of stocks, bonds, and other financial instruments that could raise about $350 billion a year toward investment in the things that nurses know are needed to rebuild Main Street’s working-class communities: living wage jobs, expansion of healthcare, opportunities for education, and initiatives toward a sustainable and clean environment. The RNs at the convention were treated to a presentation by Robert Pollin, a University of Massachusetts Amherst professor and noted progressive economist who is one of the country’s leading thinkers on the subject. RNs also learned critical information about the landscape of the corporate hospital industry and right-wing attacks on the ability of nurses to advocate for patients. On Wednesday, they joined fellow union members from the Las Vegas culinary workers union on a lively picket line in front of the Venetian to protest billionaire casino owner Sheldon Adelson’s corruption of the democratic process through his outrageous political donations. For the recent November elections, Adelson gave more than $150 million to Republican political campaigns, the largest single contributor in election history, and has pledged to contribute even more in future campaign cycles to achieve an anti-democratic, anti-worker agenda for the country. “Adelson says double down, we say take him down,” shouted nurses as they marched. Nurses dance in Robin Hood hats singing "All I want for Christmas" is to tax Wall Street. See video

Despite the money and corporate forces arrayed against nurses, many were still able to share stories of triumph, whether through successful unionization elections, wins of first contracts, or fight backs against management attempts to weaken the power of RNs. Their experiences served as inspiration and testament to what registered nurses can achieve if they stay organized and unified.