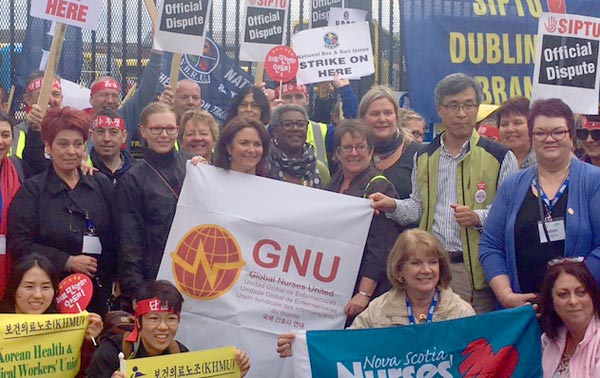 Aims to Step Up Fight against Austerity, Privatization, Attacks on Public Health

Leaders of the premiere nurses and health care workers unions in 14 nations in the Americas, Africa, Asia, and Europe have announced plans to form a new international organization to step up the fight against the harmful effects of austerity measures, privatization, and cuts in health care services that they say are putting people and communities at risk across the planet.

Calling the new formation Global Nurses United, leaders of the initial endorsing countries said they would also work collectively to guarantee the highest standards of universal healthcare as a human right for all, to secure safe patient care, especially with safe nurse-to-patient ratios, and safe health care workplaces.

Pledging to work together with all health care workers and other organizations committed to economic and social justice, the leaders of Global Nurses United said they are also unified in opposition to the adverse effects of income inequality, poverty, mal distribution of wealth and resources, attacks on public workers, and the ravages of climate change.

As participants noted, there are international union formations of other sectors ranging from teachers to steel workers.  Now nurses have one as well, said enthusiastic GNU participants.

The founding meeting was hosted by National Nurses United, the largest U.S. union and organization of nurses, and chaired by NNU’s executive director RoseAnn DeMoro. “The unity and determination of nurse and healthcare worker unions to come together and push to protect all our people is a profound expression of how deeply the neoliberal agenda is coordinating and devastating countries and lowering standards worldwide,” DeMoro said

Taking action, the unions said, will be a major focus of Global Nurses United. GNU members said they will kick off the new organization with actions in member nations in September coinciding with the opening of the next session of the United Nations General Assembly. The focus of the actions will likely be austerity, privatization of health and other public services, and other attacks on health services, with specific actions and targets tailed to national priorities.

In the initial meeting June 22, participants in nearly every country described similar crises of erosion of health and other basic services and public protections, attacks on the rights, living standards, and even personal security of nurses and other workers.

In every nation the workers are in motion, challenging austerity measures imposed by conservative governments or globalized corporate assaults, with strikes and other major protests. With Global Nurses United, the unions said they will be able to better coordinate such actions, provide international solidarity, and offer each other support and assistance.

As the participants said in their opening declaration, “We, the leaders of international nurses and healthcare unions affirm our intention to work collectively to protect our professions, our patients, our communities, our work, our health, our environment, and our planet.”