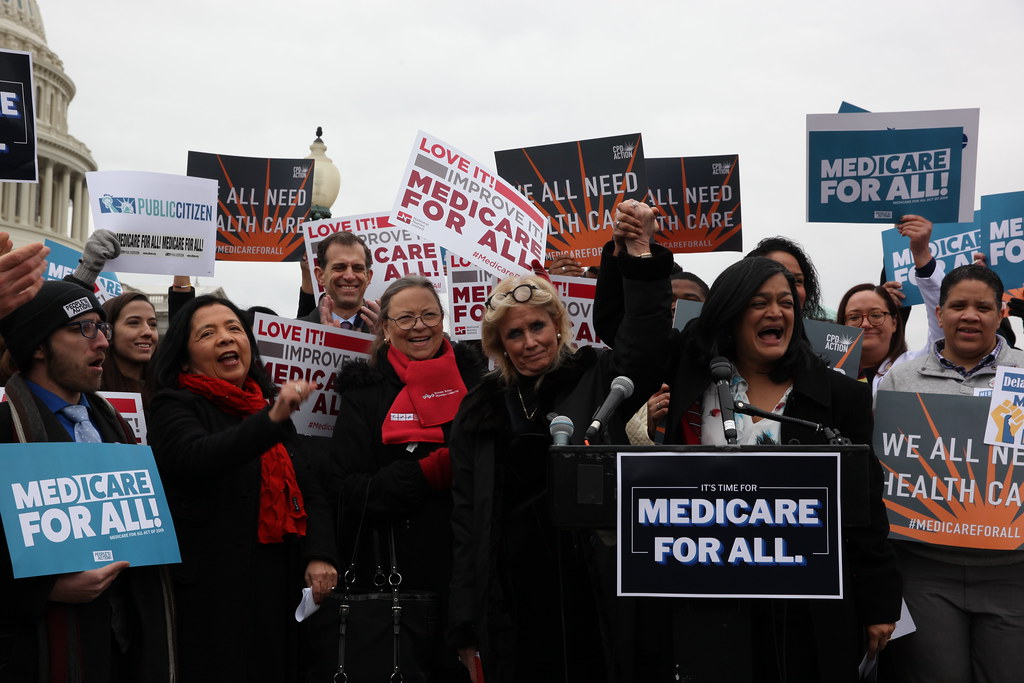 It was an unexpected teaching moment for Fox News -- a lesson that all the fear mongering in your playbook doesn’t carry quite so far when you confront a mass movement for transformative change that will dramatically improve people’s lives.

How many people “get their insurance from work, private insurance,” he asked. Most hands went up. How many, Baier then asked, “are willing to transition to what the Senator says a government run system?”

To no doubt his shock, nearly all the hands stayed up, accompanied by wild cheers – for the Medicare for All proposal the Fox network, and the President who is their number one cheerleader, have spent months demonizing.

Indeed, “only in the Fox News bubble,” writes Washington Post columnist Helaine Olen, “would anyone be surprised by the popularity of Medicare-for-all — polls routinely find more than half of Americans say they support it.”

At a time when as many as 40 percent of Americans are struggling with how to pay their health care bills while also facing high costs for housing and other basic needs, the sign posts of support for Medicare for All are everywhere.

This week, 30,000 grocery workers at 240 New England Stop & Shop workers are on strike, with a key issue employer demands for brutal health care cuts – Stop & Shop wants to shift healthcare premium costs of $890 per week per employee onto the workers, the most senior of whom are making about $13 an hour.

The grocery workers are following in the footsteps of a wave of teacher strikes, in which health care costs have been a major driver, and other worker-management clashes.

And more and more working people, as reflected in the polls cited by Olen, and the response at the Fox town hall, are insisting on a health care system based on patient need, not ability to pay – Medicare for all.

The Fox town hall took place at an events center in Bethlehem that was built on the former Bethlehem Steel’s steel stacks – a metaphor for the graveyard of post-industrial America in rural Pennsylvania- the end game of the neoliberal agenda.

I have family who are teachers who haven't had a raise in a decade because of health care takeaways. The people in that town hall are very well known to me, mostly white, mostly poor and working class, and all uniformly suffering when it comes to healthcare, including those on Medicare in its current form.

What Fox executives, despite months of stoking panic about “socialized medicine,” may have realized to their horror Monday is that not only have they badly underestimated how much people are suffering, but also how willing people are to radically change the broken system that is hurting them. I watched that teaching moment five times, the whole room raised their hands for Medicare for all.

National Nurses United has been steadily leading a grassroots movement for Medicare for all in which tens of thousands of volunteers across the U.S. have engaged in the work rarely seen by media networks and corporate executives – knocking on doors, phone banking, handing out flyers at farmer’s markets and neighborhood meetings, and recruiting more volunteers.

During a February National Week of Action, leading up to the introduction of the House Medicare for All bill, HR 1384, introduced by Reps. Pramila Jayapal and Debbie Dingel with 108 House co-sponsors, three barnstorms – organizing meetings at which volunteers are brought together and work planned out – were held in Lehigh Valley towns, Bethlehem, Easton, and Allentown. One outcome of those barnstorms was the decision of local Rep. Susan Wild to sign on to HR 1384 as a co-sponsor.

Support for the bill is blossoming, as seen in thre reception for the Senate Medicare for all bill, S 1129, introduced in early April by Sen. Sanders, with the support of other Democratic Presidential candidates, including Senators Cory Booker, Kirsten Gillebrand, Kamala Harris, and Elizabeth Warren.

Our campaign, the Nurses Campaign for Medicare For All, is winning and I know that it is because we are leading a grassroots-based movement for healthcare justice in this country acting in solidarity with our brothers and sisters internationally including our friends at Momentum in the UK.

Now is a very different time than ever before in the Medicare For All movement and it’s reflected in the pace of the campaign but now we have to step it up even more.

The beauty of the distributed organizing model is that it scales up easily to meet this demand. The beauty of this campaign is that people everywhere are ready to pitch in and do the hard work it takes to literally knock every door to organize the demand for Medicare For All.

In addition to canvassing and phone banking, volunteers are also scheduling visits with their legislators, writing letters and calling their local media, and urging their local elected officials to pass resolutions endorsing the Medicare for All bills. Seattle, Oakland, and Boston city councils, and San Francisco Supervisors have in the past few weeks passed resolutions, among a number of others.

No major social reform in U.S. history – whether abolition of slavery, women’s suffrage, banning child labor, union rights, Social Security, ending legal segregation laws, and Medicare itself – have won without a mass movement paving the ground and demanding it.

We’re in a different moment for Medicare for All. And it’s because the movement is growing. Need more proof? Ask Bret Baier and Fox News.

Read on Common Dreams
Nationwide
Medicare For All